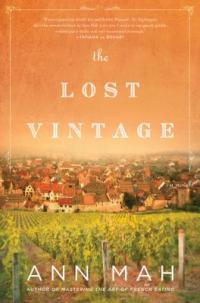 The Lost Vintage * is food and travel writer (Mastering The Art Of French Eating: Lessons in food and love from a year In Paris, 2013) Ann Mah’s hardcover debut. It is informed by the experience of spending a week working in a Champagne vineyard. (See her 2016 article for the New York Times)

With the San Francisco Michelin-starred restaurant closing abruptly, sommelier Kate Elliott was at loose ends. Anxious over her upcoming final try (she failed twice) at the Master of Wine Examination, she returned to the vineyard in Burgundy that has belonged to her mother’s family for generations, intent on bolstering her shaky knowledge of Burgundian vintages. The domaine is now run by her cousin Nico and his wife Heather, Kate’s UC Berkeley roommate and best friend, who recruited Kate to help clear out the enormous farmhouse cellar. Behind an armoire, Kate discovered a bricked-up cave filled with valuable wine, her great-aunt Helene's diary written during the Nazi Occupation, and eventually, the family’s buried secret.

“(A) charismatic blend of mystery, romance, and post-WWII French history... Mah’s engaging story resonates on many levels and will appeal to readers who enjoy the family sagas of Kate Morton and Kristin Hannah.” (Booklist)  In the Author’s Note, Mah suggests A Train In Winter: An extraordinary story of women, friendship, and Resistance In Occupied France for the often forgotten role of French women during the war; and Agnès Humbert’s memoir, Résistance : A woman's journal of struggle and defiance In Occupied France that deeply influenced the character of Helene.