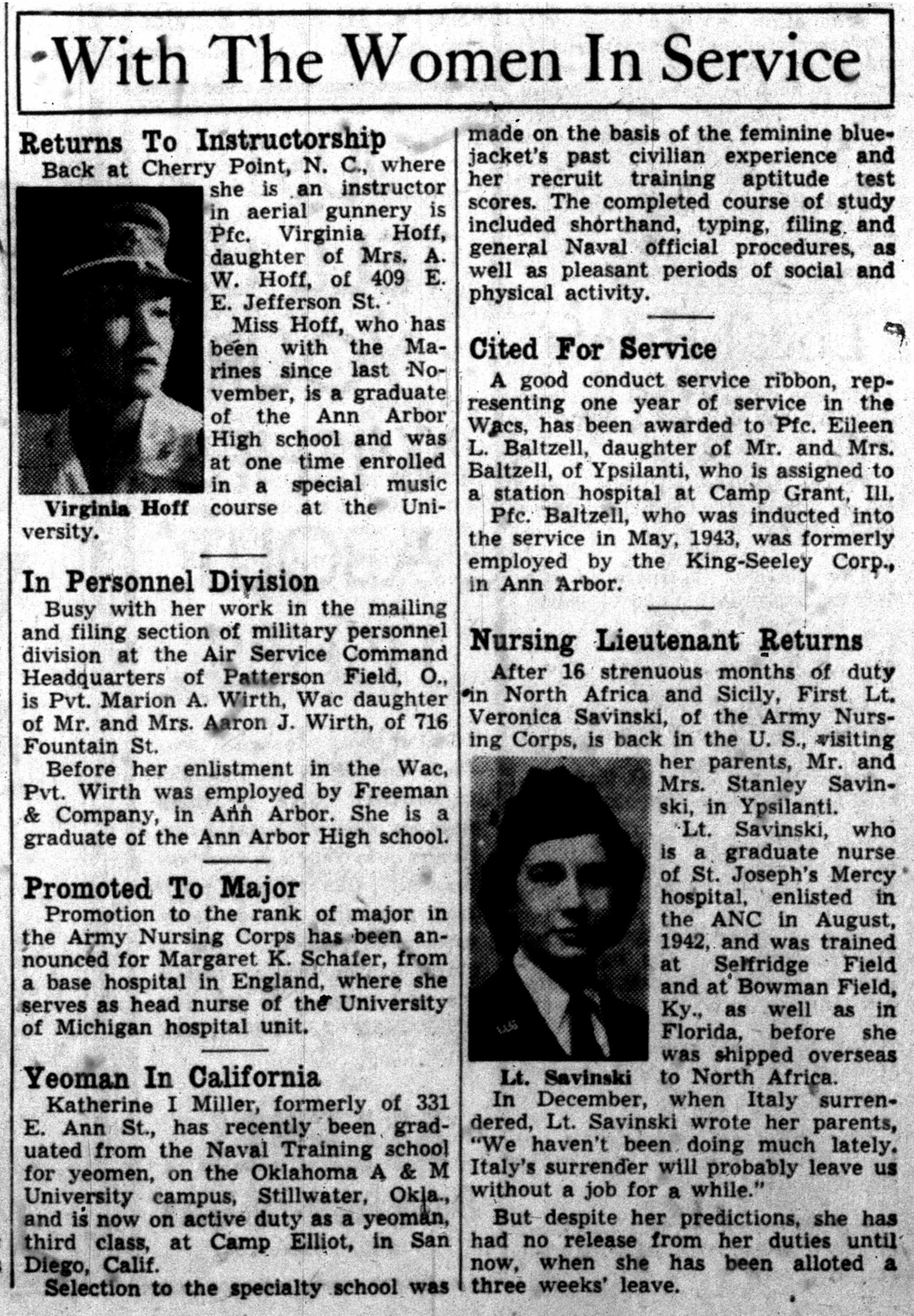 Back at Cherry Point, N.C., where she is an instructor in aerial gunnery is Pfc. Virginia Hoff, daughter of Mrs. A. W. Hoff, of 409 E. Jefferson St.

Miss Hoff, who has been with the Marines since last November, is a graduate of the Ann Arbor High school and was at one time enrolled in a special music course at the University.

Busy with her work in the mailing and filing section of military personnel division at the Air Service Command Headquarters of Patterson Field, O., is Pvt. Marion A. Wirth, daughter of Mr. and Mrs. Aaron J. Wirth, of 716 Fountain St.

Before her enlistment in the Wac, Pvt. Wirth was employed by Freeman & Company, in Ann Arbor. She is a graduate of the Ann Arbor High School.

Promotion to the rank of major in the Army Nursing Corps has been announced for Margaret K. Schafer, from a base hospital in England, where she serves as head nurse of the University of Michigan hospital unit.

Katherine I. Miller, formerly of 331 E. Ann St., has recently been graduated from the Naval Training school for yeomen, on the Oklahoma A & M University campus, Stillwater, Okla., and is now on active duty as a yeoman, third class, at Camp Elliot, in San Diego, Calif.

Selection to the specialty school was made on the basis of the feminine blue-jacket's past civilian experience and her recruit training aptitude test scores. The completed course of study included shorthand, typing, filing and general Naval official procedures, as well as pleasant periods of social and physical activity.

A good conduct service ribbon, representing one year of service in the Wacs, has been awarded to Pfc. Eileen L. Baltzell, daughter of Mr. and Mrs. Baltzell, of Ypsilanti, who is assigned to a station hospital at Camp Grant, Ill.

Pfc. Baltzell, who was inducted into the service in May, 1943, was formerly employed by the King-Seeley Corp., in Ann Arbor.

After 16 strenuous months of duty in North Africa and Sicily, First Lt. Veronica Savinski, of the Army Nursing Corps., is back in the U. S., visiting her parents, Mr. and Mrs. Stanley Savinski, in Ypsilanti.

Lt. Savinski, who is a graduate nurse of St. Joseph's Mercy hospital, enlisted in the ANC in August, 1942, and was trained at Selfridge Field, Ky., as well as in Florida, before she was shipped overseas to North Africa.

In December, when Italy surrendered, Lt. Savinski wrote her parents, "We haven't been doing much lately. Italy's surrender will probably leave us without a job for a while."

But despite her predictions, she has had no release from her duties until now, when she has been alloted a three weeks' leave.