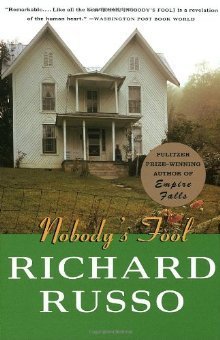 With so many new, buzzed-about books coming out all the time, it can be easy to forget about the oldies but goodies. In Throwback Thursday, we celebrate some of the books that are just as enjoyable now as they were when they were written years ago. This week, we take a look at Pulitzer Prize-winning author Richard Russo’s 1993 novel, Nobody’s Fool.

I was a little skeptical when my partner first recommended Nobody’s Fool to me, partly because it’s a somewhat daunting tome—the copy I have comes in at just under 550 pages—and partly because he said about Donald Sullivan, the main character: “He’s a dirtbag with a heart of gold—you’ll love him.” Within the first ten pages of the book, however, I was drawn in by Russo’s amazing dexterity with words and his incredibly personable, full characters.

Set in small-town upstate New York, Nobody’s Fool opens during Thanksgiving week sometime in the mid-1980s. Donald “Sully” Sullivan is indeed a dirtbag with a heart of gold, who rents the upper flat of a house owned by his 80-year-old landlord, Miss Beryl. Suffering from an untreated knee injury, Sully spends his time good-naturedly tormenting his best friend Rub, doing the occasional construction job, eating burgers at the local diner and drinking his nights away with a rotating cast of characters at the only bar in town. In some ways, nothing really happens in Nobody’s Fool. This lack of climax is one of the great joys of Nobody’s Fool, though. Events take place, sure, but for the most part readers get the feeling that they are just another customer at Hattie’s (the diner), participating in the usual goings-on of North Bath, New York. Russo’s writing is so immersive and entertaining that I wouldn’t have it any other way.

It’s easy to make a novel about a small-town hokey and it’s even easier for an author unfamiliar with small-town life to come off as holier-than-thou when trying to write about it. Russo hits the exact right notes with his portrait of North Bath, and his smart, funny, quick characters are a delight to get to know. About Sully, Russo writes “He was a man capable of sporadic generous impulses, which he enjoyed while they lasted without regretting their absence once they played themselves out.” As Sully, Miss Beryl, Rub and the other North Bath-ians go about their daily lives, I grew to love and care about them in a way that I’ve never felt about other fictional characters.

Although I could have flown through Nobody’s Fool in a few days, I enjoyed taking my time with it and savoring the lovely, unique story that spools out slowly over just a few weeks in time. I’m delighted it was recommended to me, and even more delighted to be able to pass on the recommendation to readers everywhere!

And, although I haven’t seen it yet, there’s a movie adaptation, too, starring none other than Paul Newman.