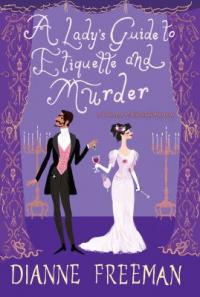 A Lady's Guide to Etiquette and Murder * * by Dianne Freeman

April, 1899. After a year of mourning her philandering husband, Reggie, American heiress Frances Wynn, Countess of Harleigh was finally able to leave the crumbling family manor and money-grubbing in-laws to start a new life for herself and her young daughter in London, just in time to sponsor her younger sister Lily Price for her first London Season. When Inspector Delaney of the Metropolitan Police informed her that her husband’s death was being investigated as a possible murder, she turned to her new neighbor and brother of her best friend, George Hazelton for support.

Then a string of mysterious burglaries, a murder in her garden, and a clumsy attempt on her life convinced Frances that one of her sister’s aristocratic suitors might not be whom he claimed to be, and a killer was in their midst.

A suggested read-alike : A Useful Woman, the first in the Rosalind Thorne series by Darcie Wilde (a pseudonym for Sarah Zettel) is inspired by Jane Austen’s works. It introduces a charming and resourceful heroine privy to the secrets of high society—including who among the ton is capable of murder.