Throwback Thursday: A River Runs Through It 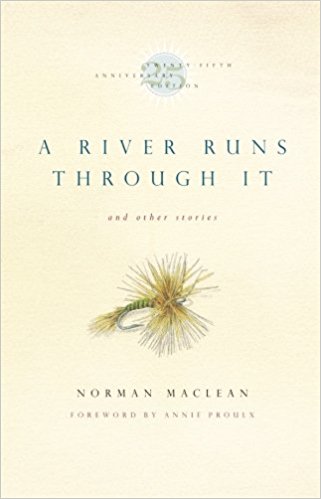 With so many new, buzzed-about books coming out all the time, it can be easy to forget about the oldies but goodies. In Throwback Thursday, we celebrate some of the books that are just as enjoyable now as they were when they were written years ago. This week, we’re looking at one of the classic American stories of the twentieth century, Norman Maclean’s A River Runs Through It.

The novella, the title story in a collection first published in 1976, tells the story of two brothers who—despite a complicated relationship in most respects—have long been able to connect over a shared love of fly-fishing. The story was recommended to me by my sister, who thought I would enjoy it because I have so long enjoyed fishing (although the art of fly-fishing has thus far eluded me). She was right that fishing enthusiasts might find a particular resonance with A River Runs Through It, but the story is much more than simply a tale about the sport.

Set in rural western Montana, A River Runs Through It is semi-autobiographical and loosely describes the relationship that Maclean had with his younger brother, Paul. Sons of a preacher, there were two religions in the boys’ household growing up: Christianity and fly-fishing. As the boys grow older, the Maclean character settles into to a somewhat hardscrabble but ultimately modest and content life with his wife and family. Paul, however, remains hard-drinking, hard-living and trouble-causing and the two disagree often over life’s moral quandaries. Even during the midst of their worst arguments, however, the two can always find common ground on the river, where Maclean remains in awe of his younger brother’s fishing prowess. The story is beautiful not only for the stunning descriptions of the natural world (Maclean worked on a forest crew in the western United States for years and clearly knew the land well), but also for the author’s ability to intersperse profundity into what could otherwise be a simple short story.

Those familiar with A River Runs Through It know that it is not an easy story to read, but it is certainly one well worth spending an afternoon on, and one that has stayed with me ever since I finished it several months ago.

For those interested, there is a 1999 movie adaptation of the novella as well, starring Brad Pitt and Robert Redford.