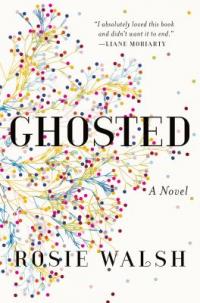 For the past 19 years, successful (and newly single) non-profit entrepreneur Sarah Mackey returns home to spend the month of June with her parents in an idyllic corner of Gloucester. On a blistering hot day, she met Eddie David, coaxing a lost sheep back to pasture. Their connection was instant. After seven blissful days together, Eddie left on a planned vacation and disappeared, despite promises to call and plans made. Her constant email, texts and Facebook posts went unanswered. Rather than simply considered herself  “ghosted”, Sarah became increasingly worried as days and weeks went by.  But then she discovers she is right. There is a reason for Eddie's disappearance, and it is the one thing they didn't share with each other: the truth.

Told through a combination of letters, texts, voicemail, “Walsh weaves an intricate story of mystery, deception, grief, and forgiveness that begins slowly and builds steam as the plot twists and turns, and steers clear of predictability.” (Library Journal)