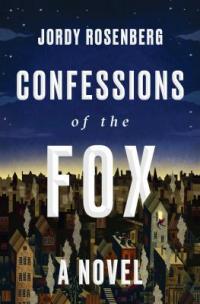 Entertainment Weekly called Confessions of the Fox * *, Jordy Rosenberg’s debut novel  “an ambitious work of metafiction, a sexy queer love story, and a rigorously researched and argued piece of scholarship, all rolled into one.”

Jack Sheppard (1702-24) and Bess Edgeworth were the most notorious thieves, jailbreakers, and lovers of 18th c. London. Yet no one knows the true story - until  2018, when transgender university professor R. Voth happens upon a manuscript, dated 1724 at a library book sale titled “Confessions of the Fox”. P, born a female was sold into servitude to a carpenter at twelve. Shackled in an attic room, P found an aptitude for picking locks. Roaming the streets at night,  P met and fell in love with Bess, a sex worker with links to London’s underworld and the queer subculture. Slight in built and nimble with tools, P fulfilled her desire to live as “Jack” and became one of the most wanted in the city’s criminal history. As Dr. Voth obsessively annotates the manuscript, desperate to find the answer, being drawn deeper into Jack and Bess’s tale, it becomes clear that their fates are intertwined, and only a miracle will save them all.

“Even when Rosenberg, a scholar of 18th-century literature and queer/trans theory at the University of Massachusetts–Amherst, allows Voth to become pedantic, it’s in the service of this novel’s marvelous ambition: To show how easily marginalized voices are erased from our histories—and that restoring those voices is a disruptive project of devotion….a singular, daring, and thrilling novel: political, sexy, and cunning as a fox.” (Kirkus Reviews)

“Fans of Sarah Waters's Fingersmith will find this a good companion-more political and academic, perhaps, but similarly absorbing in period detail” (Library Journal)