This simple research question launched a month-long hunt for clues about printers and presses in early Michigan history. The search led me from the digitized newspaper holdings of the Ann Arbor District Library to the 19th century newspapers and archives of the University of Michigan’s Bentley Historical Library to online forums about the history of letterpresses in the United States. I became a 19th century detective; and my quarry turned out to be not just one press, but many.

To find out what kind of press the Signal of Liberty was printed on during its peak years in the mid-1840s, I also had to research three other newspapers that were sponsored by the Michigan State Anti-Slavery Society: the American Freeman (1839) and Michigan Freeman (1839-1841), both published in Jackson, and Battle Creek’s Michigan Liberty Press (1848-1849). I learned that the Signal and its immediate predecessors and successors were printed on at least four different printing presses during a cumulative 10-year run. The table below maps out the editors, printers, and presses of these papers. The rest of the post explains how I tracked them down. 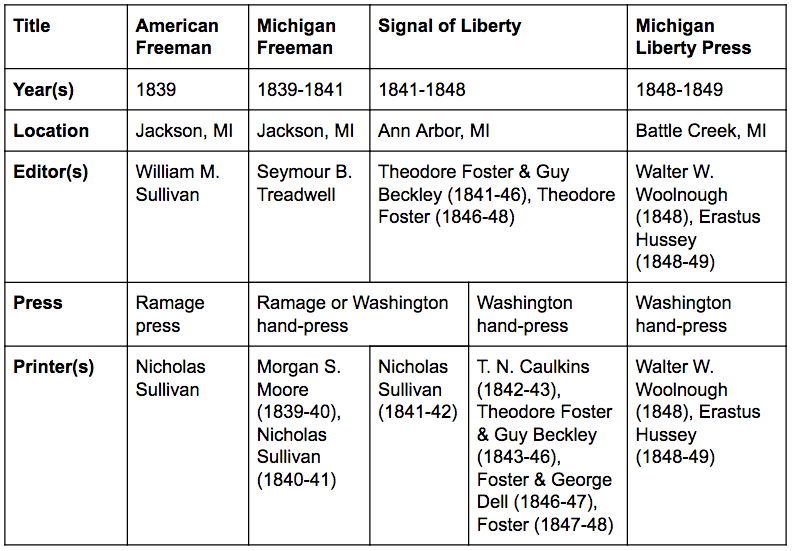 One of the first clues I followed was the first printer of the Signal of Liberty, Nicholas Sullivan, whose name appeared on the masthead from April 1841 to April 1842. Sullivan’s affiliation with the paper stretched back to the Signal’s very first predecessor, the Jackson-based American Freeman. Very little information exists about the American Freeman. It was edited by Nicholas Sullivan’s abolitionist brother, Rev. William M. Sullivan, until it was replaced by the weekly Michigan Freeman. Only three issues remain from the American Freeman’s very short run in the spring and summer of 1839. I read these in the original at the Bentley Historical Library. A recurring illustration caught my eye: a printing press spreading light across the globe, accompanied by the motto “Our country must be preserved.” 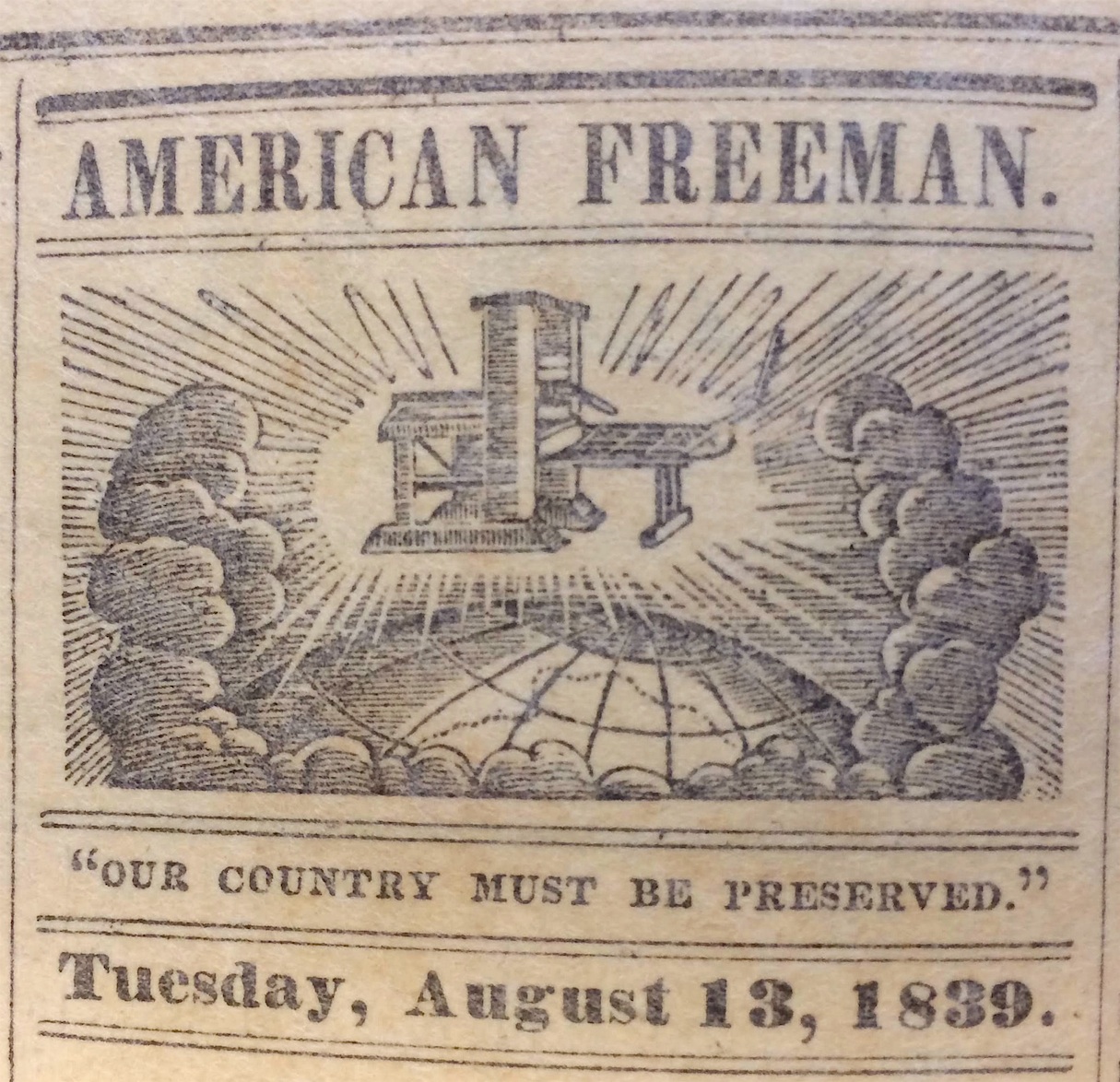 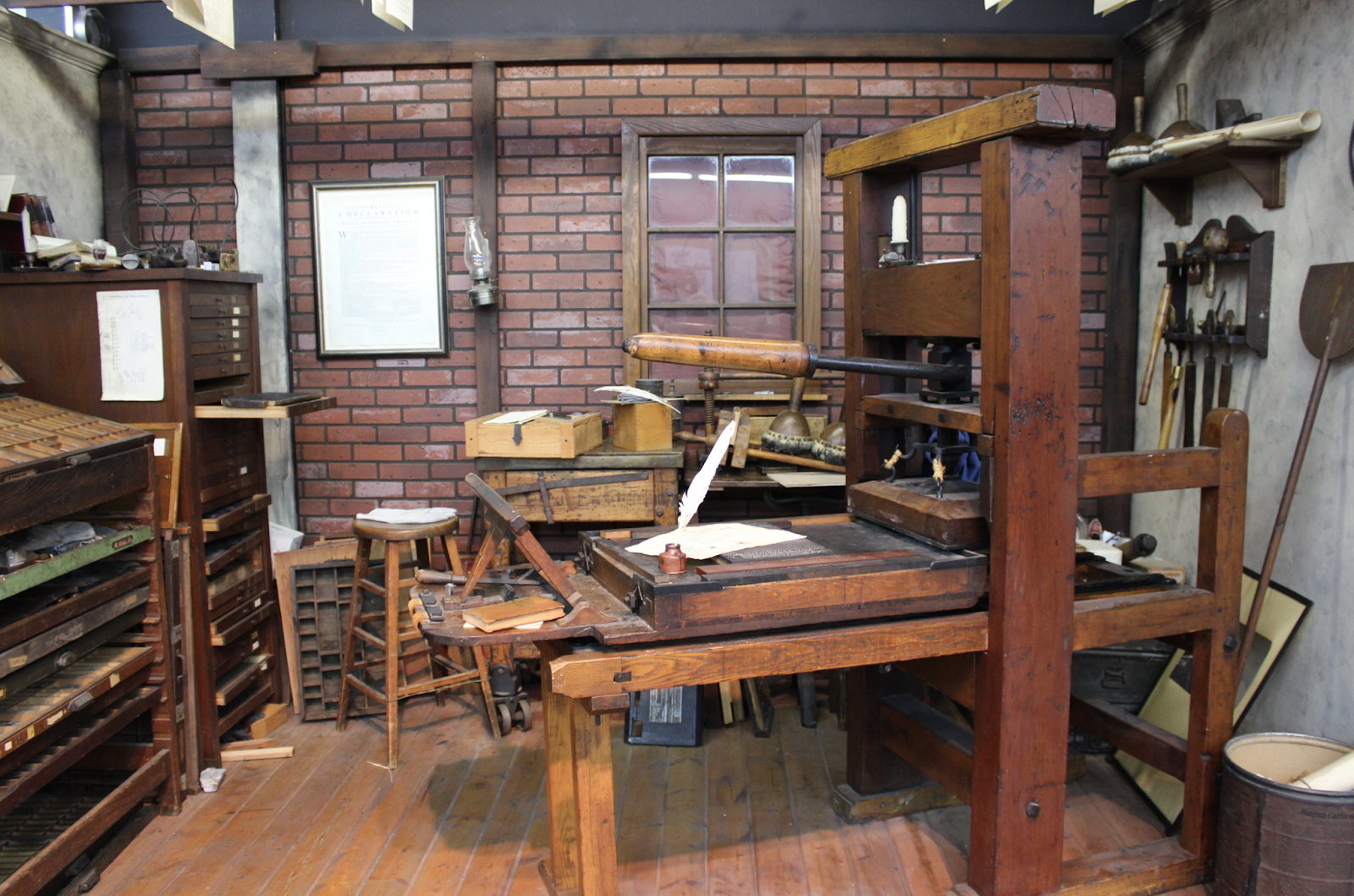 Could this illustration be a representation of the American Freeman’s printing press, I wondered? Or was it a popular woodblock engraving available for purchase—a 19th century version of a “stock photo”? Whether or not it was specially drawn for the Freeman, further research convinced me that the press represented here is accurate. The sturdy, square frame is that of a wooden hand-press, specifically a model called a Ramage.

The Ramage was a popular press in early Michigan newspaper history. A full-sized hand-press with a wooden frame, it was light enough to transport to far-flung territories, but it was more labor-intensive than the new iron lever presses that replaced it. Two pressmen working at top speed could only print a “token” of paper per hour (that’s 240 sheets, or a half ream): one man would spread ink on the type, and the other would “pull the devil’s tail,” the lever that brought the platen down to create the impression. As long-time Michigan newspaperman S. B. McCracken recalled from his time working as an apprentice for Pontiac’s Jacksonian (1838-1839), “two pulls were required to print one side of a four or five column paper.” By the time McCracken was a compositor for the Signal of Liberty in the mid-1840s, Ramages had been largely replaced by the faster, more efficient Washington presses, which required only one pull per side.

After a good deal of sleuthing, I confirmed that the American Freeman was, indeed, printed on a Ramage press. The key to identifying Nicholas Sullivan’s press was his apprentice or “devil,” Charles “Vic” DeLand, who assisted Sullivan in printing the Jacksonburg Sentinel (1837-1840). Recalling his boyhood days in the printing office, DeLand wrote that the Jacksonburg Sentinel “was printed on an old-fashioned Ramage press, mostly made of wood, and required four impressions to print a single paper. The ink was spread on the type with buckskin balls, about the size of a dinner plate, which was spatted over the form.” The American Freeman was printed by the exact same process.

An even more fascinating discovery was that Sullivan’s press was only the third printing press in Michigan: before traveling to Jackson, the old Ramage printed Detroit’s first weekly newspaper as well as the first newspaper in Washtenaw county! This discovery came from my historian’s impulse to follow an obscure footnote, which led me to an 1854 article published by DeLand in his newspaper the American Citizen (now the Jackson Citizen-Patriot). The Jackson District Library was kind enough to share the article with me. DeLand wrote that Sullivan’s press was part of “the old Detroit Gazette establishment” before it was brought to Ann Arbor in 1829 to print the Western Emigrant, the first newspaper in Washtenaw county. From there, 22-year-old Nicholas Sullivan purchased the press while en route from Vergennes, Vermont to Jackson. Following in the footsteps of these historic predecessors, he set out to print Michigan’s first antislavery newspaper.

The Press from Ohio

I dug into the next iteration of the paper, the Michigan Freeman, at the Bentley Historical Library. In August 1839 the Michigan State Anti-Slavery Society purchased its own press and equipment, hired New Yorker Seymour B. Treadwell as editor, and rebranded the American Freeman as the Michigan Freeman (1839-1841). A letter from Treadwell to his sixteen-year-old son described his commitment to “go to Jackson to labor for the enslaved and for our country.” I found very little information about the new printing press, however. A line in a biography of Treadwell, written by his daughter, stated that it was transported via open wagon from Columbus, Ohio, while an undated newspaper clipping claimed that “the press and type were brought from Cincinnati in a common market wagon.”

Treadwell had initially recruited his colleague Morgan S. Moore, a printer from Rochester, to print the Freeman. However, ads for Nicholas Sullivan’s printing office that reappear in 1840 suggest that Sullivan resumed his role as printer when Moore resigned to start the Michigan State Gazette (1840-1849). It seems that Moore and Sullivan swapped presses at this point: Moore used Sullivan’s old Ramage for the Gazette, while Sullivan took over the press owned by the Michigan State Anti-Slavery Society to continue printing the Michigan Freeman. 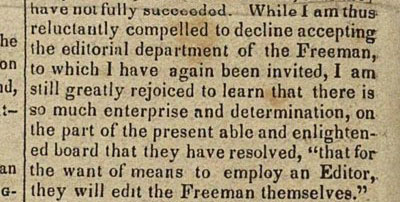 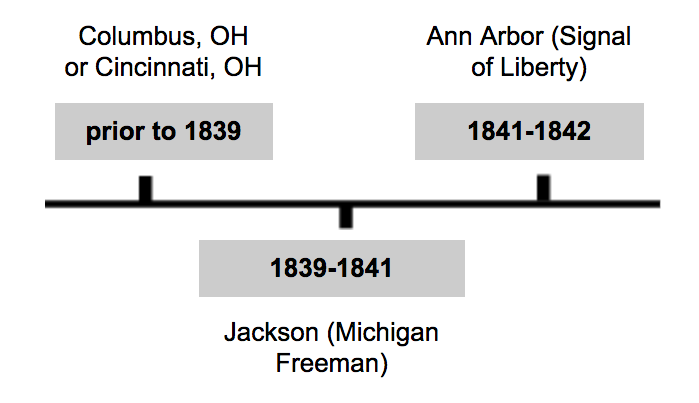 By 1841, the Freeman was severely underfunded and Treadwell resigned. Determined to continue the paper as a core component of the society’s antislavery mission, the executive committee of the Michigan State Anti-Slavery Society resolved to “edit the Freeman themselves.” Naming committee members Theodore Foster and Rev. Guy Beckley as editors of the new Signal of Liberty, they transferred the paper and its press to Ann Arbor and commenced publishing on April 28, 1841. Their printer was, once again, Nicholas Sullivan. Within a year, however, Sullivan had decided to start his own paper. He moved to Brighton and then Howell, where he settled in as printer and editor of The Livingston Courier (1843-1857).

Even with Sullivan’s departure, the Signal of Liberty continued to publish weekly issues. How did they do it? The next major clue I followed was an article in the Signal of Liberty itself. On March 6, 1843, the editors Theodore Foster and Reverend Guy Beckley announced that they had purchased a press and fifty cases of type from T. N. Caulkins. The newspaper missed one of its weekly installments while they moved the printing equipment to the second floor of Josiah Beckley’s (Guy Beckley’s brother’s) mercantile shop on the Huron block of Broadway in Ann Arbor. 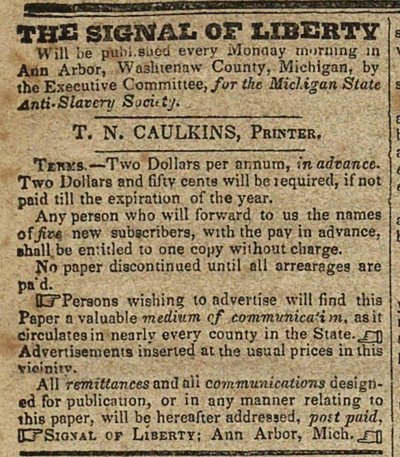 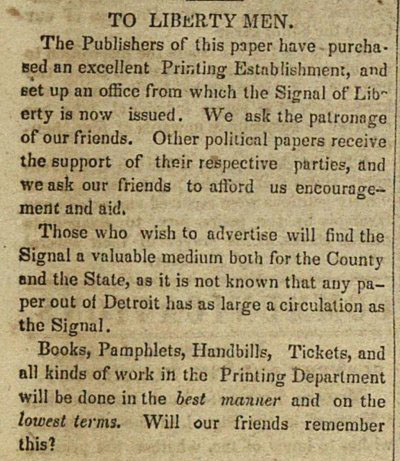 But who was T. N. Caulkins, and what kind of press did he have? The Signal of Liberty’s masthead indicates that he was the printer from April 1842 to February 1843. He was also the editor and printer of Ann Arbor’s Democratic Herald (1839-1842). According to local historian Louis William Doll, the Signal was “printed on the Herald’s press by contract” until Caulkins’ ideological disagreements with the Democratic party—including the fact that he was also printing an antislavery paper—led to complaints by readers of the Herald and his decision to sell his equipment to Foster and Beckley. Caulkins originally purchased the press from the Herald’s predecessor, the Michigan Argus (1835-1839). Unfortunately, none of the sources I found about the Argus, the Herald, or the Signal give clues as to what kind of press Caulkins operated. However, the decades of its active use—from as early as 1835 to as late as 1857—suggest that it was a durable Washington hand-press, just as Kephart guessed. 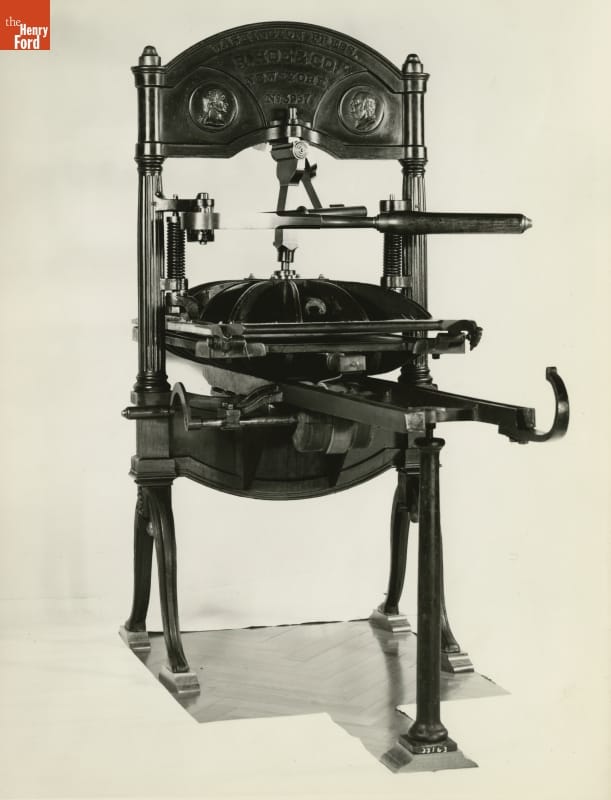 The Washington hand-press—which was three or four times faster than a Ramage—was a popular model for mid-nineteenth-century newspapers, including the Michigan-based Detroit Free Press (1831-present) and Grand River Times (1837-1841). First patented in 1821 and then improved in 1829 by Samuel Rust, the Washington press featured an efficient toggle joint lever, a larger platen, and a relatively light-weight iron frame that could be disassembled for transport to Western territories—most often by boat or wagon, but in at least one local case by a team of sled dogs. It was also very durable: while en route from Niagara Falls, the press of the Grand River Times survived a shipwreck off Thunder Bay Island and a fall through river ice before running its first issue on April 18, 1837. Michiganders can see a nineteenth-century Washington hand-press in person at the Print & Tin Shop in Greenfield Village at The Henry Ford.

When the Signal of Liberty folded in 1848 due to lack of funding and personnel changes, the Michigan State Anti-Slavery Society transferred their antislavery paper to Battle Creek, where they employed local printer Walter W. Woolnough, former editor of Battle Creek’s first newspaper, the Western Citizen and Champion (1845-1848), to print the newly-named Michigan Liberty Press. Within a few months they had purchased Woolnough’s Washington press, and the paper came under the editorship of abolitionist and Underground Railroad conductor Erastus Hussey. 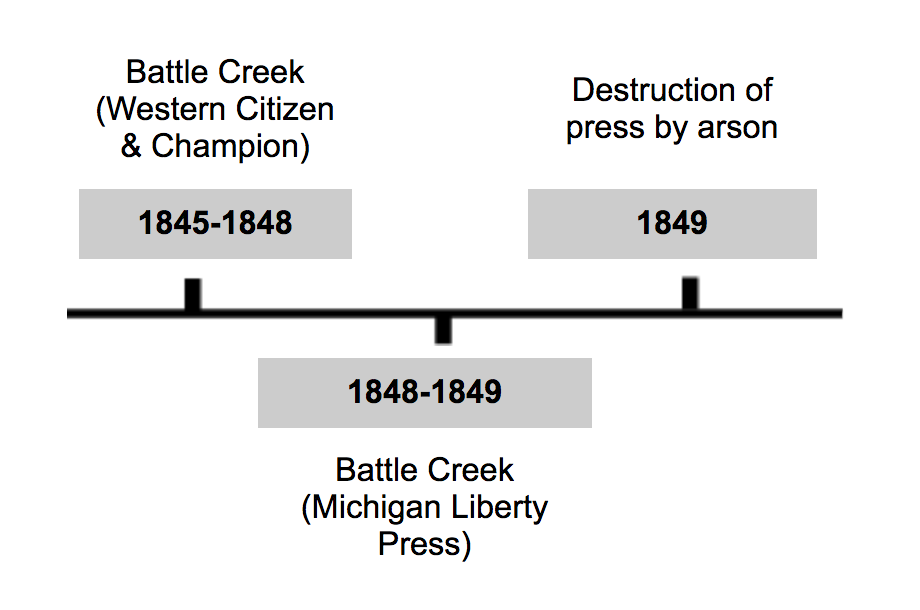 Unfortunately, the Michigan Liberty Press did not last long. As was the case with several other newspapers promoting abolitionism and anti-racism in the nineteenth century, the press itself became a target for attack. According to Battle Creek historian Berenice Bryant Lowe, Hussey’s press and all its equipment was burned in June 1849 by proslavery arsonists. The power of the printing press in promoting abolitionism at mid-century emerges clearly in the pages of antislavery newspapers, as well as in this incident of backlash-fueled vandalism. The destruction of Hussey’s press marked the end of the Michigan State Anti-Slavery Society’s sponsorship of an antislavery newspaper, but abolitionist sentiment was on the rise, and papers in nearby states such as Marius R. Robinson’s Salem, Ohio Anti-Slavery Bugle (1845-1861) and Frederick Douglass’s Rochester, NY North Star (1847-1851) took up the cause.

To learn more about printing the Signal of Liberty—including what kinds of paper and ink were available to Michigan printers in the 1830s and 40s, and a glimpse into a newspaper editor’s daily tasks—check out Part III and Part IV of “Paper, Ink, and Pi,” coming soon! (Or return to Part I.)