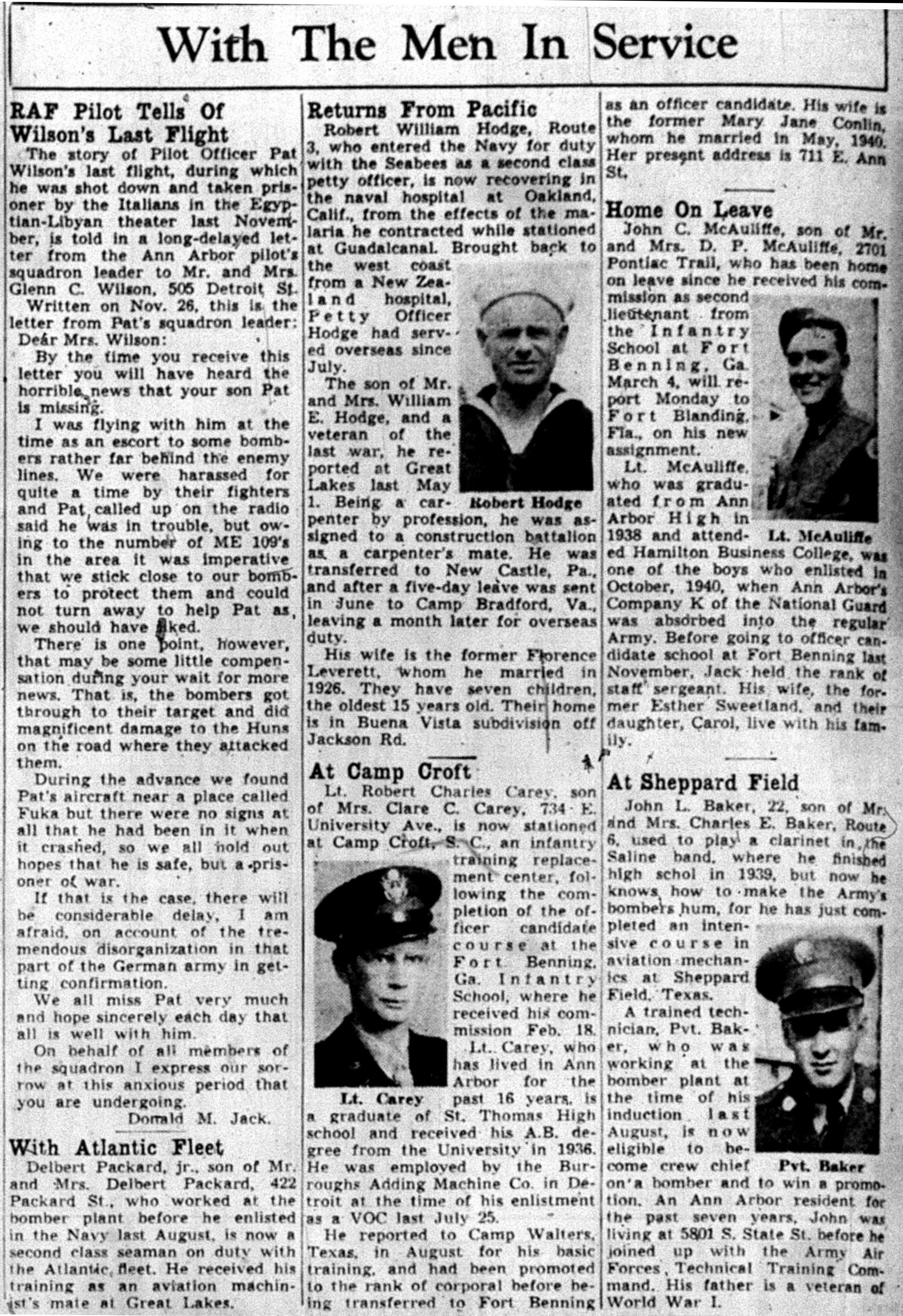 The story of Pilot Officer Pet Wilson's lest flight, during which he was shot down end taken prisoner by the Italians in the Egyptian-Libyan theater last November, is told in a long-delayed letter from the Ann Arbor pilot's squadron leader to Mr. end Mrs. Glenn C Wilson, 505 Detroit St.

Written on Nov. 26, this is the letter from Pat's squadron leader: Dear Mrs. Wilson:

By the time you receive this letter you will have heard the horrible news that your son Pet Is missing.

I was flying with him at the time as an escort to some bombers rather far behind the enemy lines. We were harassed for quite a time by their fighters and Pat called up on the radio said he was In trouble, but owing to the number of ME 109's in the area It was Imperative that we stick close to our bombers protect them and could not turn away to help Pat as, we should have liked.

There is one point. however, that may be some little compensation during your wait for more news. That is, the bombers got through to their target and did magnificent damage to the Huns on the road where they attacked them.

During the advance we found Pat's aircraft near a place called Fuka but there were no signs at all that he had been in it when it crashed, so we all hold out hopes that he is safe, but a prisoner of war.

If that is the case, there will be considerable delay, I am afraid, on account of the tremendous disorganization in that part of the German army in getting confirmation.

We all miss Pat very much and hope sincerely each day that all is well with him.

On behalf of all members of the squadron I express our sorrow at this anxious period that you are undergoing.

Delbert Packard, Jr., son of Mr. and -Mrs. Delbert Packard. 422 Packard St., who worked at the bomber plant before he enlisted in the Navy last August, is now a second class seaman on duty with the Atlantic fleet. He received his training as an aviation machinist's mate at Great lakes.

Robert William Hodge, Route 3, who entered the Navy for duty with the Seabees aa a second class petty officer, is now recovering In the naval hospital at Oakland, Calif., from the effects of the malaria he contracted while stationed at Guadalcanal. Brought back to the west coast from a New Zealand hospital, Petty Officer Hodge had served overseas since July.

The son of Mr. and Mrs. William E. Hodge, and a veteran of the last war. he reported at Great Lakes last May 1. Being a carpenter by profession, he was assigned to a construction battalion as a carpenter's mate. He was transferred to New Castle, Pa., and after a five-day leave was sent in June to Camp Bradford, Va., leaving a month later for overseas duty.

His wife Is the former Florence Leverett, whom he married in 1926. They have seven children, the oldest 15 years old. Their home Is in Buena Vista subdivision off Jackson Rd.

Lt. Carey, who was has lived In Ann Arbor for the past 16 years. Is a graduate of St. Thomas High school and received his A.B. degree from the University In 1936. He was employed by the Burroughs Adding Machine Co. in Detroit at the time of his enlistment as a VOC last July 25.

He reported to Camp Walters, Texas, in August for his basic training, and had been promoted to the rank of corporal before being transferred to Fort Benning as an officer candidate. His wife is the former Mary Jane Conlin, whom he married In May, 1940. Her present address Is 711 E. Ann St.

John C. McAuliffe, son of Mr. and Mrs. D. P. McAuliffe. 2701 Pontiac Trail, who has been home on leave since he received his commission as second lieutenant from the Infantry School at Fort Benning . Ga. March 4. will report Monday to Fort Blanding, Fla., on his new assignment.

Lt. McAuliffe. who was graduated from Ann Arbor High in 1938 and attended Hamilton Business College, was one of the boys who enlisted in October, 1940, when Ann Arbor's Company K of the National Guard was absorbed into the regular Army. Before going to officer candidate school at Fort Benning last November, Jack held the rank of staff  sergeant. His wife, the former Esther Sweetland. and their daughter, Carol, live with his family.

John L. Baker, 22, son of Mr and Mrs. Charles E. Baker. Route 6, used to play a clarinet in the Saline band, where he finished high school in 1939, but now he knows how to make the Army's bombers hum, for he has just completed an intensive course in aviation mechanics at Sheppard Field, Texas.

A trained technician, Pvt. Baker, who was working at the bomber plant at the time of his induction last August is now eligible to become crew chief on’a bomber and to win a promotion. An Ann Arbor resident for the past seven years, John was living at 5801 S. State St. before he joined up with the Army Air Forces, Technical Training Command. His father is a veteran of World War I.