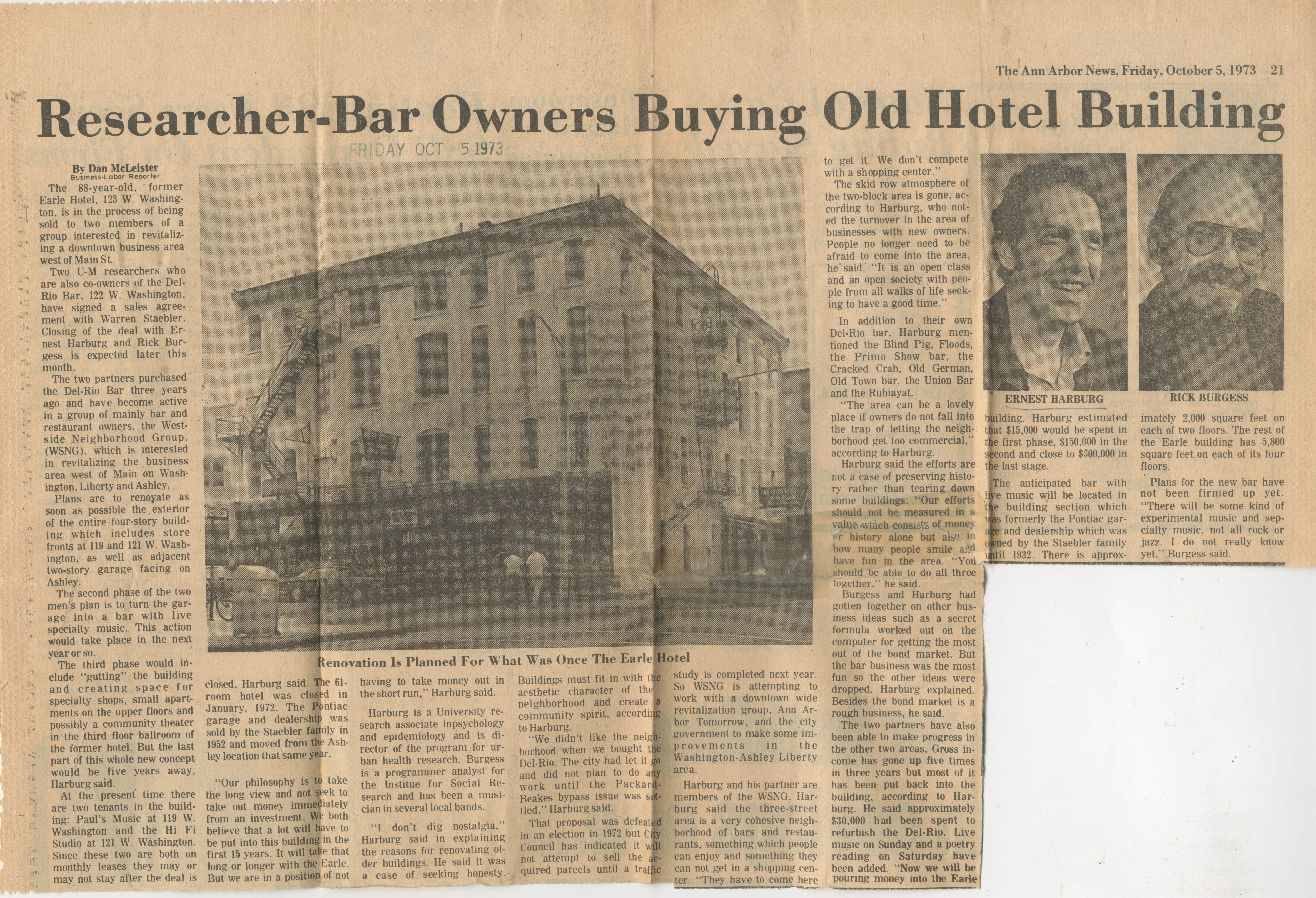 Renovation Is Planned For What Was Once The Earle Hotel

The 88-year-old, former Earle Hotel, 123 W. Washington, is in the process of being sold to two members of a group interested in revitalizing a downtown business area west of Main St.

Two U-M researchers who are also co-owners of the Del-Rio Bar, 122 W. Washington, have signed a sales agreement with Warren Staebler. Closing of the deal with Ernest Harburg and Rick Burgess is expected later this month.

The two partners purchased the Del-Rio Bar three years ago and have become active in a group of mainly bar and restaurant owners, the West-side Neighborhood Group. (WSNG), which is interested in revitalizing the business area west of Main on Washington, Liberty and Ashley.

Flans are to renovate as soon as possible the exterior of the entire four-story building which includes store fronts at 119 and 121 W. Washington, as well as adjacent two-story garage facing on Ashley.

The second phase of the two men’s plan is to turn the garage into a bar with live specialty music. This action would take place in the next year or so.

The third phase would include “gutting” the building and creating space for specialty shops, small apartments on the upper floors and possibly a community theater in the third floor ballroom of the former hotel. But the last part of this whole new concept would be five years away, Harburg said.

At the present time there are two tenants in the building: Paul’s Music at 119 W. Washington and the Hi Fi Studio at 121 W. Washington. Since these two are both on monthly leases they may or may not stay after the deal is closed, Harburg said. The 61-room hotel was closed in January, 1972. The Pontiac garage and dealership was sold by the Staebler fartiilv in 1952 and moved from the Ashley location that same year

“Our philosophy is to take the long view and not seek to take out money immediately from an investment. We both believe that a lot will have to be put into this building in the first 15 years. It will take that long or longer with the Earle. But we are in a position of not having to take money out in the short run,” Harburg said.

Harburg is a University research associate in psychology and epidemiology and is director of the program for urban health research. Burgess is a programmer analyst for the Institute for Social Research and has been a musician in several local bands.

“I don’t dig nostalgia,” Harburg said in explaining the reasons for renovating older buildings. He said it was a case of seeking honesty.

Buildings must fit in with the aesthetic character of the neighborhood and create a community spirit, according to Harburg.

“We didn’t like the neighborhood when we bought the Del-Rio. The city had let it go and did not plan to do any work until the Packard-Beakes bypass issue was settled,” Harburg said.

That proposal was defeated in an election in 1972 but City Council has indicated it will not attempt to sell the acquired parcels until a traffic study is completed next year.  So WSNG is attempting to work with a downtown wide revitalization group, Ann Arbor Tomorrow, and the city government to make some improvements in the Washington-Ashley Liberty area.

Harburg and his partner are members of the WSNG. Harburg said the three-street area is a very cohesive neighborhood of bars and restaurants, something which people can enjoy and something they can not get in a shopping center. “They have to come here to get it. We don’t compete with a shopping center.”

The skid row atmosphere of the two-block area is gone, according to Harburg, who noted the turnover in the area of businesses with new owners.

People no longer need to be afraid to come into the area, he said. “It is an open class and an open society with people from all walks of life seeking to have a good time.”

In addition to their own Del-Rio bar, Harburg mentioned the Blind Pig, Floods, the Primo Show bar, the Cracked Crab, Old German, Old Town bar, the Union Bar and the Rubiayat.

“The area can be a lovely place if owners do not fall into the trap of letting the neighborhood get too commercial,” according to Harburg.

Harburg said the efforts are not a case of preserving history rather than tearing down some buildings. “Our efforts should not be measured in a value which consists of money or history alone but also in how many people smile and have fun in the area. “You should be able to do all three together,” he said.

Burgess and Harburg had gotten together on other business ideas such as a secret formula worked out on the computer for getting the most out of the bond market. But the bar business was the most fun so the other ideas were dropped, Harburg explained.  Besides the bond market is a rough business, he said.

The two partners have also been able to make progress in the other two areas. Gross income has gone up five times in three years but most of it has been put back into the building, according to Harburg. He said approximately $30,000 had been spent to refurbish the Del-Rio. Live music on Sunday and a poetry reading on Saturday have | been added. “Now we will be pouring money into the Earle building. Harburg estimated that $15,000 would be spent in he first phase, $150,000 in the second and close to $500,000 in the last stage.

The anticipated bar with live music will be located in the building section which was formerly the Pontiac garage and dealership which was owned by the Staebler family until 1932. There is approximately 2,000 square feet on each of two floors. The rest of the Earle building has 5,800 square feet, on each of its four floors.

Plans for the new bar have not been firmed up yet. “There will be some kind of experimental music and specialty music, not all rock or jazz. I do not really know yet.” Burgess said.