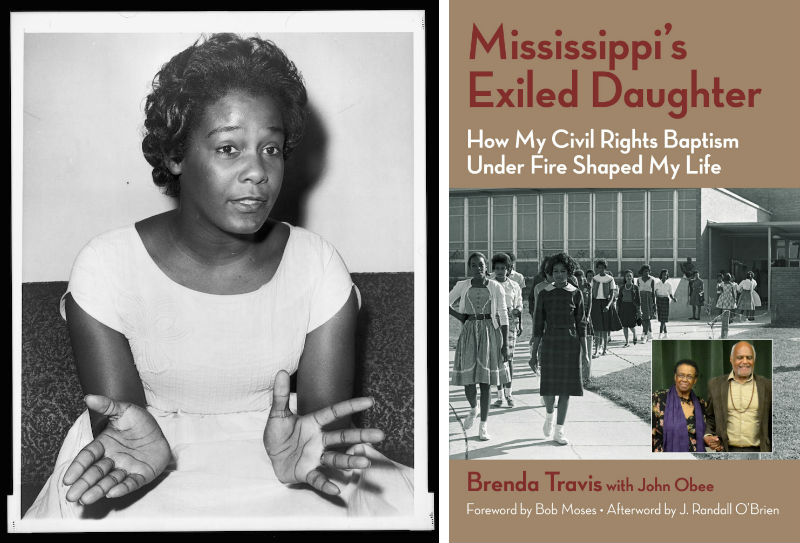 When she came to AADL on September 27 to discuss her book Mississippi’s Exiled Daughter with her co-author, John Obee, I hadn’t expected her to burst into song. But that’s exactly what she did, singing parts of "Ella’s Song," a tune written in honor of civil and human rights leader Ella Baker. The audience joined in, singing with her. Her talk was not to be a passive listening experience.

Travis then explained that one of the reasons that she’s still on the civil rights journey is that she still believes in freedom. “There is still a place called hope," she said, "and we have to make hope our homes. We have to continue this struggle and fight until we can get it right. ... To the young people, I’m hoping tonight that I can instill or wake up something within you to want to carry on this battle, to carry on this fight, because if you don’t we’re going to be lost -- not just a nation but a lost world.”

The author then took us on a journey through her personal story. This part of her presentation started with Emmett Till. Travis was 10 years old when Till was murdered. She grew up in a household where the adults did what they could to protect their children by shielding them from the atrocities that were going on around them. So, it was Jet Magazine that introduced Travis to Till’s murder. Days later, the police burst into her home, got her brother out of bed, and took him away. When her grandmother attempted to find out why they were taking him, she was brusquely shut down, the threat of violence heavy shadow in the room. At 10 years old, Travis could only think of Emmett Till’s dead body, his beaten, distorted, swollen body. The body she described like this: “It did not look human. It looked like a monster in a casket.”

The family never found out why her brother was taken, but he reappeared later that afternoon. The police released him and said that it was a case of mistaken identity. The family felt that their prayers had been answered. This incident was Travis’ awakening. She knew that she had to do something to foment change.

“We had a praying family. We had to be in church every Sunday.” --Brenda Travis

Travis discussed the era she grew up in. In her segregated school, the young men took shop class, the women had home economics.  Travis pointed out that with home economics, the young women were being prepared for going into the kitchen, for being a homemaker.  To be clear, these young black girls were being prepared to do this domestic work not in their own homes, but in other people’s homes.

A woman of age in the crowd nodded her head deeply as if she could feel Travis’ words throughout her bones. Travis noticed the woman and spoke directly to her, “You’re shaking your head and witnessing what I’m saying here.”

Travis continued, addressing the audience broadly, and asked, “When we’re telling the truth, why isn’t it accepted? Some people deny it.” She added that when she goes to Pike County, Mississippi, looking for her own arrest record, it’s not there. “They’ve tried to destroy every ugly, disfigured, distasteful thing that they did, and they’ve done a pretty good job at it because it’s not there.”

The Mississippi State Sovereignty Commission was a states rights organization that operated in Mississippi between 1956 and 1977. Its stated objective was to “protect the sovereignty of the state of Mississippi, and her sister states” from the federal government. Travis compares the organization to the FBI and says that they tracked the activists and wrote all sorts of “ugly, nasty, vicious” things about them. That brought to mind the COINTELPRO program that operated chiefly during the same time period. According to Travis, they were called communists and disparaging remarks were made about their sexual availability. In telling the story, she refused to repeat some of the language used, ever mindful that there were teenagers in the crowd.

“They claimed that I had … ,” Travis began before laughter escaped her. She explained though, that she wasn’t laughing because something was funny. Her laughter was of the keep-from-crying variety. “The humor is to massage my heart,“ she said. “They say that I wasn’t expelled from school for my civil rights activity but for my promiscuity. I had to ask somebody, ‘What was that?’” An aside, she quipped, that her school system hadn’t prepared her with the vocabulary that she needed to know what the word meant at that time.

The act that led to Brenda Travis’ arrest and the consequences that she faced afterward was the decision to attempt to desegregate the Greyhound ticket counter in McComb, Mississippi. She, along with contemporaries Bobby Talbert and Ike Lewis, walked to the whites-only ticket counter through a throng of hateful stares and epithets and were arrested before they could attempt to purchase their tickets. Travis was in jail for 28 days until of a coalition involving the NAACP and the Southern Christian Leadership Conference paid her bail. Travis was 16 years old.

Following her arrest, Travis returned to school -- and found out she had been expelled.  Travis said that day there happened to be an assembly, which she attended despite her expulsion. A conversation with one of her classmates revealed that the students wanted to celebrate her return. Instead, Travis explained that she had been expelled from school. She could hear murmuring in the bleachers as the news spread throughout the auditorium. One of the students stood up and asked the principal why Brenda Travis had been expelled. In response, the principal ordered “whoever said that” to see him in his office after the assembly. After the assembly, 119 students walked out of the school and they headed toward city hall singing freedom songs, planning to protest by sitting on the steps of city hall and praying.

“In the meanwhile, my mother thought I was dead.” --Brenda Travis

Travis told the rapt audience what happened next, that word started to get around town what had happened. Parents traveled to city hall in order to retrieve their children and, Travis said, “It was expected that they would correct their children with the ‘rod of correction,’ as the scripture says. They began to beat their children, hoping that it would help them to keep their jobs.” Travis’ mother did not keep her job and she wasn't able to continue living in her home. Brenda Travis was taken into custody again. This time, she was taken to the Oakley Negro Juvenile Reformatory where she was told that she would likely remain until she was 21 years old. Travis would ultimately spend six months at the reformatory.

“How is it just that I stay with this man and allow him to molest me? How is that justice?” --Brenda Travis

If someone were to write a movie about Brenda Travis’ life, the incidents of Sunday, April 22, would make one of the most haunting scenes. The scene would be pregnant with hope yet heavy with dark foreshadowing. It would depict that Easter Sunday when Travis was summoned and told that she was being released, when she thought that a German professor who had himself been a refugee was going to help her. It wasn’t uncommon, considering the press that her activism had received, for strangers to reach out to her. In this case, Professor Fischer (the alias he was given in Travis’ book) had reached out to Mississippi’s Governor Ross Barnett and arranged for her release under the condition that she leave Mississippi within 24 hours, never to return.  She thought that she had been delivered, on this resurrection day, from her detainment. But she would find that she had been saved from one imprisonment only to be delivered to the next.

Fischer called Travis his daughter and passed the unwanted touches and the hugs and kisses that lasted too long off as familial. One day, Travis’ instinct told her, as Fischer approached, that she needed to protect herself. She hit him as hard as she could, knocking him down, and understanding immediately that she needed to escape. Travis managed to get in contact with SNCC Director Jim Foreman who helped her get to Atlanta. Before she could relax as Foreman and his wife attempted to comfort her at their home, two Atlanta policemen arrived with Fischer intending to transport Travis back to Mississippi. A loophole saved her. Being 17 made her an emancipated adult in the state of Georgia, so on this day, the police did not arrest her or return her to Mississippi. But the ordeal and the judge’s agreement to release her to Fischer left her scarred: “He sent me to a prison. … I haven’t been able to shake the shackles off.”

“And I tell people. I’ve been singing ‘Georgia on My Mind’ ever since.” --Brenda Travis

One of the most striking things about sitting in the audience that evening was Travis’ presence. She radiated gratitude. Despite all that she has suffered, she consistently recognized that it could have been worse. She did not diminish the horrors, though, in order to don an optimistic mask. Instead, she seemed fueled by the presence of the darkest human motivations to bring them to light: “There’s not enough water. Not enough soap. It’s like there’s nothing that can take it away. There’s nothing that heals your wounds. So what do you do? You go through life making the best out of life that you can. And hoping that you can save someone else.”

“Our greatest assets are our young people.” --Brenda Travis

Ensuring that history is neither erased nor forgotten also seems to motivate her. She laments an observable disconnection from history. “We have about three generations of people that we’ve lost,” Travis said. She spoke of an experience she had talking to students. During her talk, Travis showed the students the iconic photos images of people being sprayed with high-pressure hoses intended to fight fires. The students laughed, perhaps not fully comprehending that they were watching people being impacted by a force strong enough to lift them from the ground, rip clothes from bodies, and peel bark from trees. Whatever they hadn’t understood, Travis set out to help them understand.

When asked a question about her return to Mississippi after being exiled, she responded, “There isn’t much to tell because I never stopped going to Mississippi. If you wanted to see a defiant one, you’re looking at her. I continued to go to Mississippi. That’s my story.”

In a sense, the night ended the way that it began. Some of Travis’ earliest experiences in activism had to do with black voter registration in Mississippi. She stressed the importance of voting and talked a bit about the history of black voter suppression. She encouraged people who help others who don’t think that they can do anything to work toward change: “Help them see that power. Help them see that anything that you do in this life is political.”

Sherlonya Turner is the manager of the Public Experience and Desk Service Department at the Ann Arbor District Library. She can be found diving headfirst into all sorts of projects over at sherlonya.net.