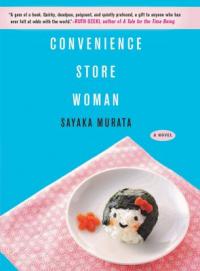 Convenience Store Woman * * by Sayaka Murata marks the English-language debut of one of Japan’s most talented contemporary writers. In 2016 she won the prestigious Akutagawa Prize, and was named a Woman of the Year by Vogue Japan. The author herself worked at a convenience store in Japan and still finds the time to do the occasional shift.

36 year-old Keiko Furukura has been working at the same Tokyo convenience store for literally half of her life. While colleagues and managers come and go, Keiko remains - finding purpose and satisfaction in the routine. Considered since childhood to be peculiar, her work allows Keiko a sense of normalcy.  While family and friends continue to pressure Keiko to seek a “proper job” and to marry, she boldly strikes a deal with the lazy, shifty irascible Shiraha.

“Alienation gets deliciously perverse treatment in Convenience Store Woman . . . the book’s true brilliance lies in Murata’s way of subverting our expectations . . . With bracing good humor . . . Murata celebrate(s) the quiet heroism of women who accept the cost of being themselves.” (NPR “Fresh Air”)

The downloadable eAudiobook (through Overdrive) expertly read by the delightful Nancy Wu, will appeal to fans of Banana Yoshimoto, Han Kang, and brings to mind Amelie, a 2001 French romantic comedy.