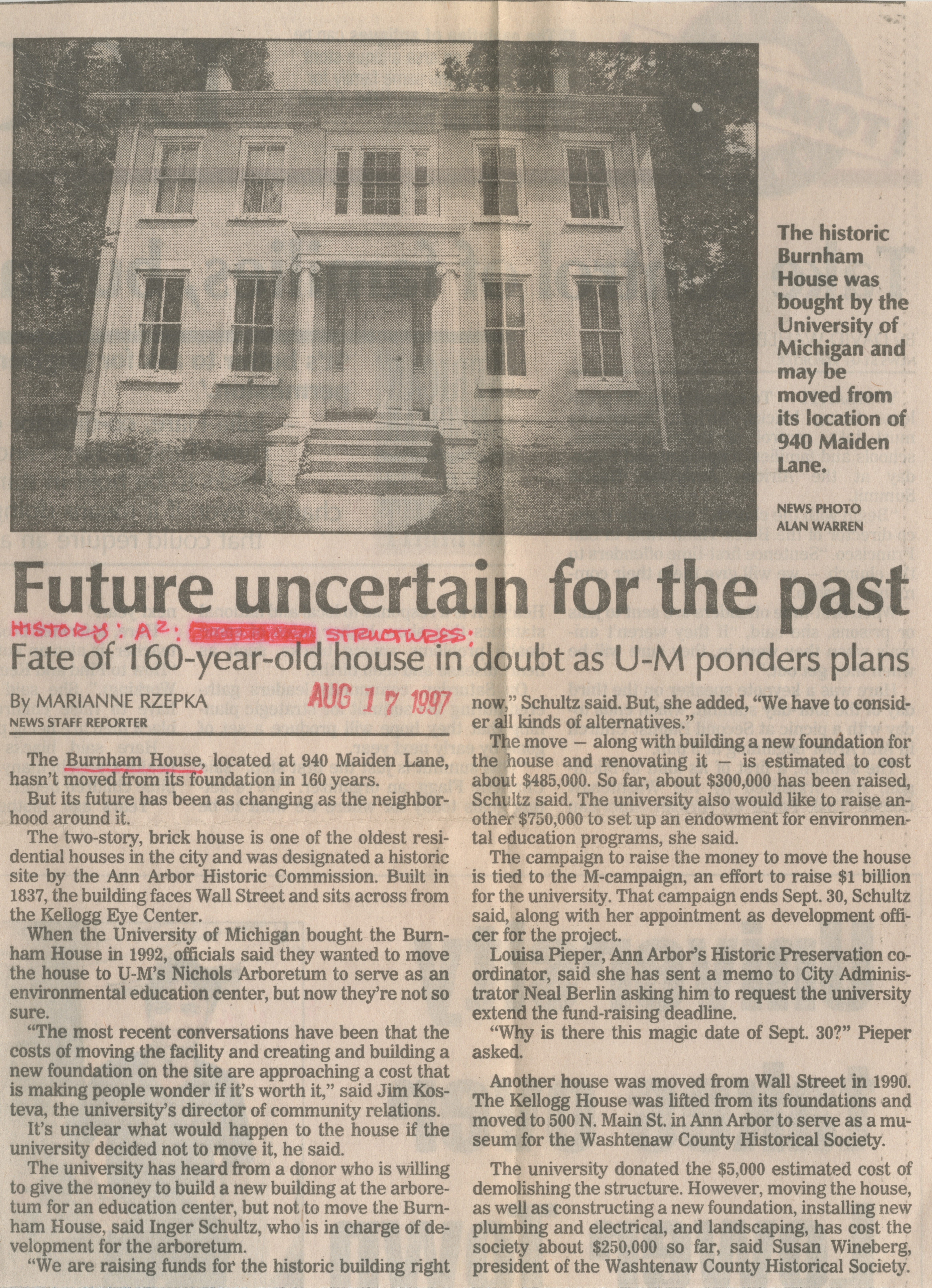 ﻿The historic Burnham House was bought by the University of Michigan and may be moved from its location of 940 Maiden Lane.

The Burnham House, located at 940 Maiden Lane, hasn’t moved from its foundation in 160 years.

But its future has been as changing as the neighborhood around it.

The two-story, brick house is one of the oldest residential houses in the city and was designated a historic site by the Ann Arbor Historic Commission. Built in 1837, the building faces Wall Street and sits across from the Kellogg Eye Center.

When the University of Michigan bought the Bum-ham House in 1992, officials said they wanted to move the house to U-M’s Nichols Arboretum to serve as an environmental education center, but now they’re not so sure.

“The most recent conversations have been that the costs of moving the facility and creating and building a new foundation on the site are approaching a cost that is making people wonder if it’s worth it,” said Jim Kos-teva, the university’s director of community relations.

It’s unclear what would happen to the house if the university decided not to move it, he said.

The university has heard from a donor who is willing to give the money to build a new building at the arboretum for an education center, but not to move the Bum-ham House, said Inger Schultz, who is in charge of development for the arboretum.

“We are raising funds for the historic building right now,” Schultz said. But, she added, “We have to consider all kinds of alternatives.”

The move - along with building a new foundation for the house and renovating it — is estimated to cost about $485,000. So far, about $300,000 has been raised, Schultz said. The university also would like to raise another $750,000 to set up an endowment for environmental education programs, she said.

The campaign to raise the money to move the house is tied to the M-campaign, an effort to raise $1 billion for the university. That campaign ends Sept. 30, Schultz said, along with her appointment as development officer for the project.

“Why is there this magic date of Sept. 30?” Pieper asked.

Another house was moved from Wall Street in 1990. The Kellogg House was lifted from its foundations and moved to 500 N. Main St. in Ann Arbor to serve as a museum for the Washtenaw County Historical Society.

The university donated the $5,000 estimated cost of demolishing the structure. However, moving the house, as well as constructing a new foundation, installing new plumbing and electrical, and landscaping, has cost the society about $250,000 so far, said Susan Wineberg, president of the Washtenaw County Historical Society.