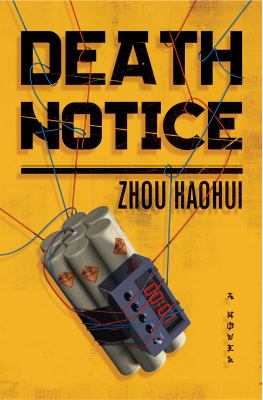 Death Notice, * the first in a trilogy, introduces English language audience to Zhou Haohui,  one of the top (and best-selling) suspense authors in China today.

2002, Chengdu. Unbeknownst to his colleagues and superiors, legendary Sgt. Zheng Haoming was quietly investigating an 18 year-old unsolved cold case when he was found murdered. Hovering over his body was provincial detective Pei Tao, closely and personally tied to the case, and insisted that it is again, the handiwork of Eumenides (after the Greek goddess of vengeance and retribution), evident by the death notice found in Sgt. Zheng’s apartment.

As more “death notices” are being delivered, announcing the killer's next targets, a new police task force is formed. What follows is a deadly game of cat-and-mouse with Eumenides always a step ahead of the police. The cliff-hanger ending will leave readers shocked and clamoring for the next installment.

"Zhou's story is thoughtfully constructed (and skillfully translated), balancing an exploration of loyalty, jealousy, and the moral tension between law and justice... This procedural...boasts the rich cultural immersion, the bird's-eye view of procedural technique in an international police force, and the complex mysteries that have long driven the popularity of Scandinavian crime fiction."(Booklist)  For fans of Jo Nesbo, and Jussi Adler-Olsen’s Department Q series.