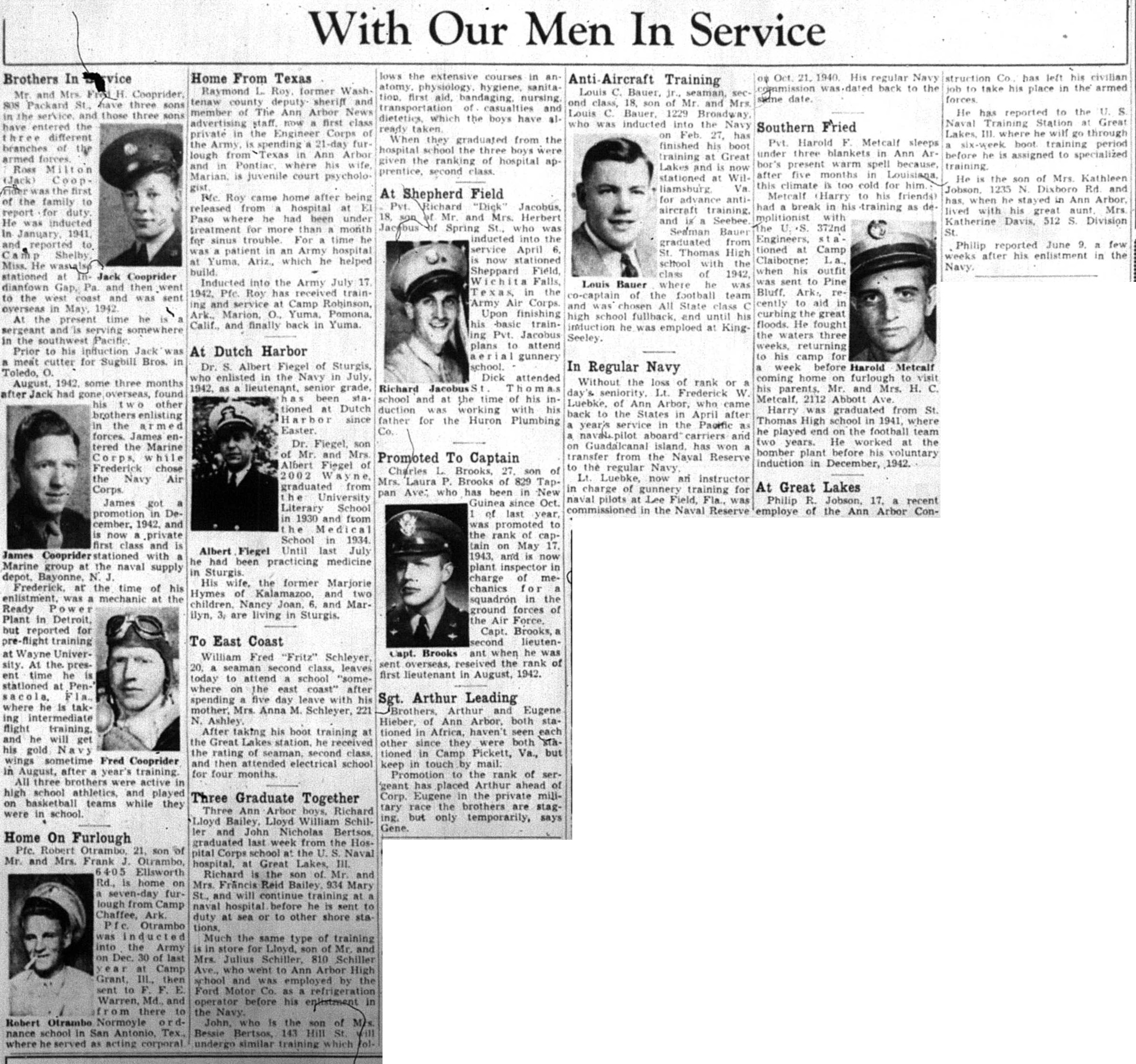 ﻿With Our Men In Service

Mr. and Mrs. Fred H. Cooprider, 808 Packard St., have three sons in the service, and those three sons have entered the three different branches of the armed forces.

Ross Milton (Jack) Cooprider was the first of the family to report for duty. He was inducted in Janaury, 1941, and reported to Camp Shelby, Miss. He was also stationed at Indiantown Gap, Pa., and then went to the west coat and was sent overseas in May, 1942.

At the present time he is a sergeant and is serving somewhere in the southwest Pacific.

Prior to his induction Jack was a meat cutter for Sugbill Bros. in Toledo, O.

August, 1942, some three months after Jack had gone overseas, found his two other brothers enlisting in the armed forces. James entered the Marine Corps, while Frederick chose the Navy Air Corps.

James got a promotion in December, 1942, and is now a private first class and is stationed with a Marine group at the naval supply depot, Bayonne, N. J.

Frederick, at the time of his enlistment, was a mechanic at the Ready Power Plant in Detroit, but reported for pre-flight training at Wayne University. At the present time he is stationed at Pensacola, Fla., where he is taking intermediate flight training, and he will get his gold Navy wings sometime in August, after a year's training.

All three brothers were active in high school athletics, and played on basket ball teams while they were in school.

Pfc. Otrambo was inducted into the Army on Dec. 30 of last year at Camp Grant, Ill., then sent to F. F. E. Warren, Md., and from there to Normoyle ordnance school In San Antonio, Tex., where he served as acting corporal.

Raymond L. Roy, former Washtenaw county deputy sheriff and member of The Ann Arbor News advertising staff, now a first class private in the Engineer Corps of the Army, is spending a 21-day furlough from Texas in Ann Arbor and in Pontiac, where his wife, Marian, is a juvenile court psychologist.

Pfc. Roy came home after being released from a hospital at El Paso where he had been under treatment for more than a month for sinus trouble. For a time he was a patient in an Army hospital at Yuma, Ariz., which he helped build.

Inducted into the Army July 17, 1942, Pfc. Roy has received training and service at Camp Robinson, Ark., Marion, O., Yuma, Pomona, Calif., and finally back in Yuma.

Dr. S. Albert Fiegel of Sturgis, who enlisted in the Navy in July, 1942, as a lieutenant, senior grade, has been stationed at Dutch Harbor since Easter.

Dr. Fiegel, son of Mr. and Mrs. Albert Fiegel of 2002 Wayne, graduated from the University Literary School in 1930 and from the Medical School in 1934. Until last July he had been practicing medicine in Sturgis.

His wife, the former Marjorie Hymes of Kalamazoo, and two children, Nancy Joan, 6, and Marilyn, 3, are living in Sturgis.

After taking his boot training at the Great Lakes station, he received the rating of seaman, second class, and then attended electrical school for four months.

Richard is the son of. Mr and Mrs Francis Reid Bailev, 934 Mary St., and will continue training at a naval hospital before he is sent to duty at sea or to other shore stations.

Much the same type of training is in store for Lloyd, son of Mr. and Mrs. Julius Schiller, 810 Schiller Ave., who went to Ann Arbor High school and was employed by the Ford Motor Co. as a refrigeration operator before his enlistment in the Navy.

John, who is the son of Mrs. Bessie Bertsos, 143 Hill St. will undergo similar training which follows the extensive courses in anatomy, physiology, hygiene, sanitation, first aid, bandaging, nursing, transportation of casualties and dietetics which the boys have already taken.

When they graduated from the hospital school the three boys were given the ranking of hospital apprentice, second class.

Pvt. Richard "Dick" Jacobus, 18, son of Mr. and Mrs. Herbert Jacobus of Spring St., who was inducted into the service April 6, is now stationed at Sheppard Field, Wichita Falls, Texas, in the Army Air Corps.

Dick attended St. Thomas school and at the time of his induction was working with his father for the Huron Plumbing Co.

Charles L. Brooks, 22, son of Mrs. Laura P. Brooks, of 829 Tappan Ave., who has been in New Guinea since Oct. 1 of last year, was promoted to the rank of captain on May 17, 1943 and is now plant inspector in charge of mechanics for a squadron in the ground forces of the Air force.

Capt. Brooks, a second lieutenant when he was sent overseas, received the rank of first lieutenant in August, 1942.

Promotion to the rank of sergeant has placed Arthur ahread of Corp. Eugene in the private military race the brothers are staging, but only temporarily, says Gene.

Louis C. Bauer, jr., seaman, second class, 18, son of Mr. and Mrs. Louis C. Bauer, 1229 Broadway, who was inducted into the Navy on Feb. 27, has finished his boot training at Great Lakes and is now stationed at Williamsburg, Va. for advance anti-aircraft training, and is a Seebee.

Seaman Bauer graduated from St. Thomas High school with the class of 1942, where he was co-captain of the football team and was chosen All State class C high school fullback, and until his induction he was employed at King-Seeley.

Without the loss of rank or a day's seniority, Lt. Frederick W. Luebke, of Ann Arbor, who came back to the States in April after a year's service in the Pacific as a naval pilot aboard carriers and on Guadalcanal island, has won a transfer from the Naval Reserve to the regular Navy.

Lt. Luebke, now an instructor in charge of gunnery training for naval pilots at Lee Field, Fla., was commissioned in the Naval Reserve on Oct. 21, 1940. His regular Navy commission was dated back to the same date.

Pvt. Harold F. Metcalf sleeps under three blankets in Ann Arbor's present warm spell because, after five months in Louisiana, this climate is too cold for him.

Metcalf (Harry to his friends) had a break in his training as demolitionist with the U. S. 372nd Engineers, stationed at Camp Claiborne, La., when his outfit was sent to Pine Bluff, Ark., recently to aid in curbing the great floods. He fought the waters three weeks, returning to his camp for a week before coming home on furlough to visit his parents, Mr. and Mrs. H. C. Metcalf, 2112 Abbott Ave.

Harry was graduated from St. Thomas High school in 1941, where he played end on the football team for two years. He worked at the bomber plant before his voluntary induction in December, 1942.

Philip R. Jobson, 17, a recent employe of the Ann Arbor Construction Co., has left his civilian job to take his place in the armed forces.

He has reported to the U. s. Naval Training Station at Great Lakes, Ill., where he will go through a six-week boot training period before he is assigned to specialized training.

He is the son of Mrs. Kathleen Jobson, 1235 N. Dixboro Rod. and has, when he stayed in Ann Arbor, lived with his great aunt, Mrs. Katherine Davis, 512 S. Division St.

Philip reported June 9, a few weeks after his enlistment in the Navy.