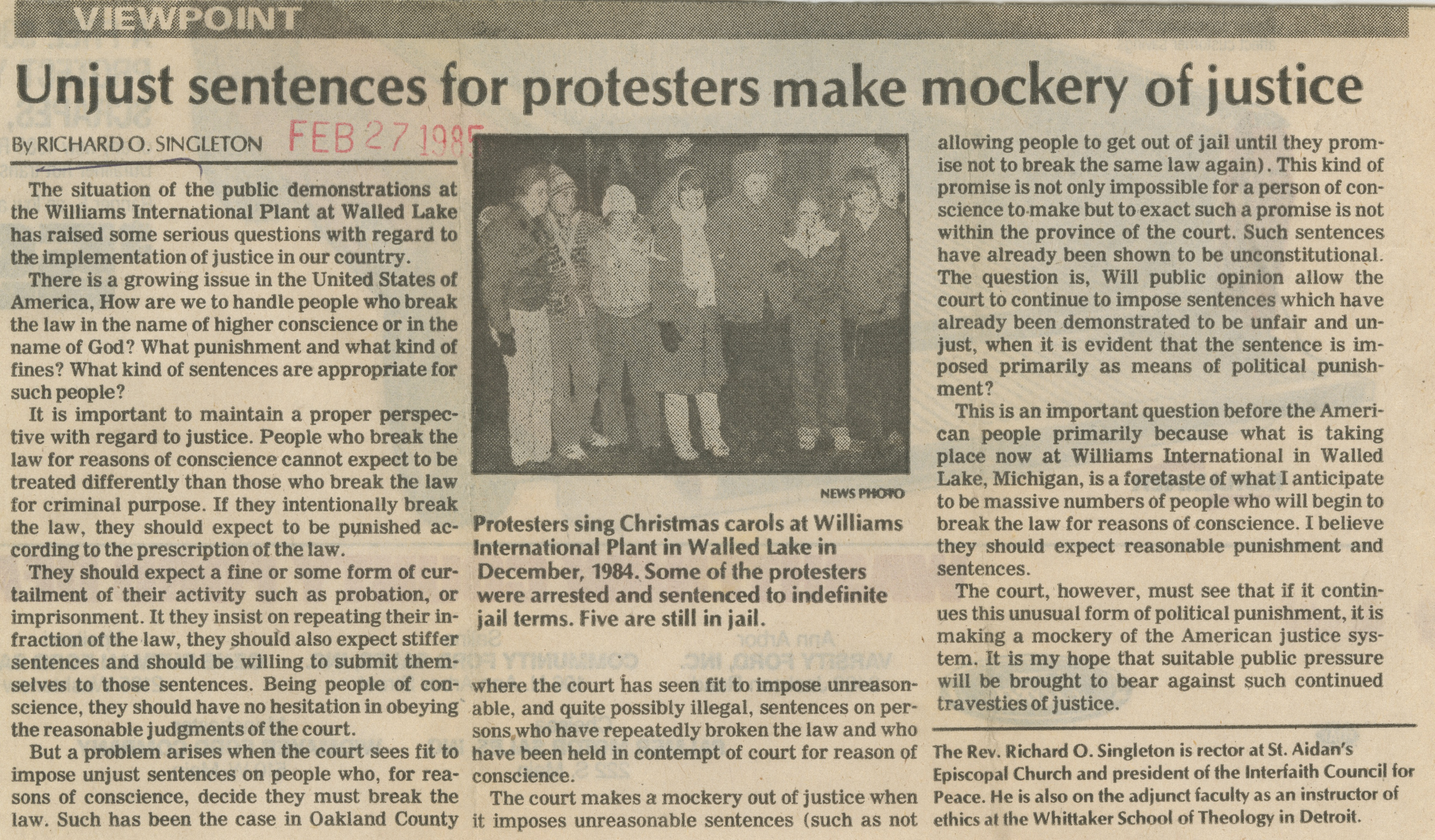 The situation of the public demonstrations at the Williams International Plant at Walled Lake has raised some serious questions with regard to the implementation of justice in our country.

There is a growing issue in the United States of America. How are we to handle people who break the law in the name of higher conscience or in the name of God? What punishment and what kind of fines? What kind of sentences are appropriate for such people?

They should expect a fine or some form of curtailment of their activity such as probation, or imprisonment. It they insist on repeating their infraction of the law, they should also expect stiffer sentences and should be willing to submit themselves to those sentences. Being people of conscience, they should have no hesitation in obeying the reasonable judgments of the court.

But a problem arises when the court sees fit to impose unjust sentences on people who, for reasons of conscience, decide they must break the law. Such has been the case in Oakland County where the court has seen fit to impose unreasonable, and quite possibly illegal, sentences on persons who have repeatedly broken the law and who have been held in contempt of court for reason of conscience.

The court makes a mockery out of justice when it imposes unreasonable sentences (such as not allowing people to get out of jail until they promise not to break the same law again). This kind of promise is not only impossible for a person of conscience to make but to exact such a promise is not within the province of the court. Such sentences have already been shown to be unconstitutional. The question is, Will public opinion allow the court to continue to impose sentences which have already been demonstrated to be unfair and unjust, when it is evident that the sentence is imposed primarily as means of political punishment?

This is an important question before the American people primarily because what is taking place now at Williams International in Walled Lake, Michigan, is a foretaste of what I anticipate to be massive numbers of people who will begin to break the law for reasons of conscience. I believe they should expect reasonable punishment and sentences.

The court, however, must see that if it continues this unusual form of political punishment, it is making a mockery of the American justice system. It is my hope that suitable public pressure will be brought to bear against such continued travesties of justice.

The Rev. Richard O. Singleton is rector at St. Aidan's Episcopal Church and president of the Interfaith Council for Peace. He is also on the adjunct faculty as an instructor of ethics at the Whittaker School of Theology in Detroit.

Protesters sing Christmas carols at Williams International Plant in Walled Lake in December, 1984. Some of the protesters were arrested and sentenced to indefinite jail terms. Five are still in jail.