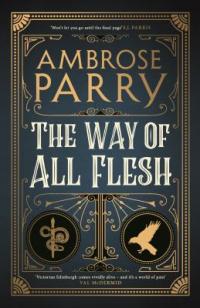 The Way of All Flesh by Ambrose Parry, (a pseudonym for husband-and-wife writing team of Christopher  Brookmyre and Dr. Marisa Haetzman, an anaesthetist), is based on her research into the history of Medicine. This is the first in a new mystery series, set in Victorian Edinburgh.

Edinburgh, 1847. 20 year-old Will Raven, the newly appointed medical apprentice to Dr. James Simpson, a revered professor of midwifery, saw this opportunity as his ticket out of his sordid and hardscrabble upbringing, but not before one last visit to Evie Lawson, a prostitute he has befriended. In her garret room, Will found her cold and contorted body. Soon, young women were found dead across the Old Town, all having suffered similarly gruesome ends. As a member of Dr. Simpson’s household, Will met visiting luminaries and became intrigue with daring experiments in the new medical frontier of anaesthesia. However, it was Sarah Fisher, the Simpson’s maid, to whom Will turned to as they looked deeper into these deaths.

“Parry is particularly adept at creating memorable characters in the compassionate and progressive Simpson, impetuous but principled Raven, and intelligent and feisty Sarah, not to mention the perfectly psychopathic villain.” (Library Journal)