What Does Minister Do With His Time? Here's The Answer 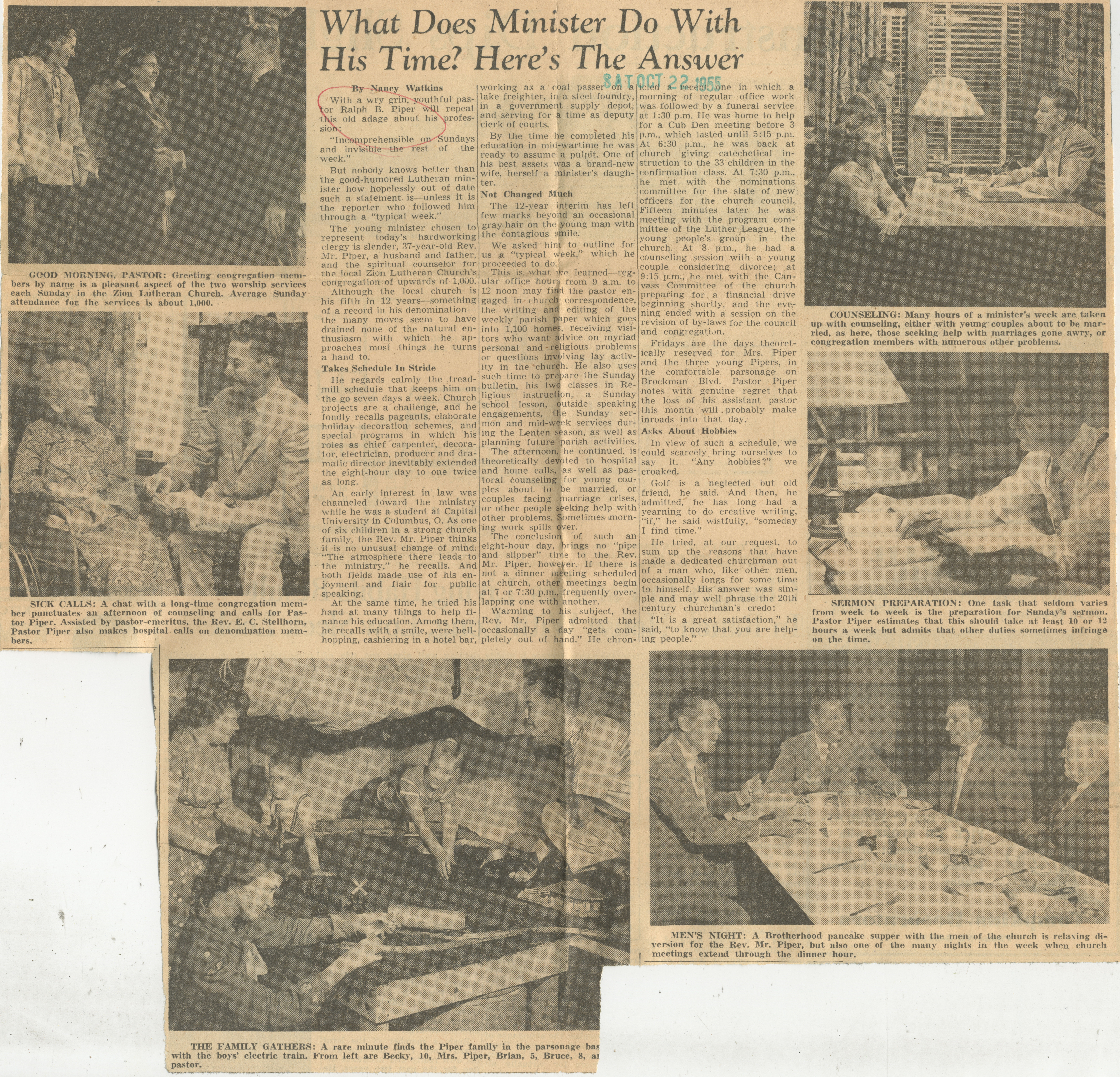 What Does Minister Do With His Time? Here’s The Answer

With a wry grin youthful pastor Ralph B. Piper will repeat this old adage about his profession:

“Incomprehensible on Sundays and invisible the rest of the week.”

But nobody knows better than the good-humored Lutheran minister how hopelessly out of date such a statement is—unless it is the reporter who followed him through a “typical week.”

The young minister chosen to represent today’s hardworking clergy is slender, 37-year-old Rev. Mr. Piper, a husband and father, and the spiritual counselor for the local Zion Lutheran Church's congregation of upwards of 1,000.

Although the local church is his fifth in 12 years—something of a record in his denomination— the many moves seem to have drained none of the natural enthusiasm with which he approaches most things he turns a hand to.

He regards calmly the treadmill schedule that keeps him on the go seven days a. week. Church projects are a challenge, and he fondly recalls pageants, elaborate holiday decoration schemes, and special programs in which his roles as chief carpenter, decorator, electrician, producer and dramatic director inevitably extended the eight-hour day to one twice as long.

An early interest in law was channeled toward the ministry while he was a student at Capital University in Columbus, O. As one of six children in a strong church family, the Rev. Mr. Piper thinks it is no unusual change of mind. "The atmosphere there leads to the ministry,” he recalls. And both fields made use of his enjoyment and flair for public speaking.

At the same time, he tried his hand at many things to help finance his education. Among them, he recalls with a smile, were bell-hopping, cashiering in a hotel bar, working as a coal passer on a lake freighter, in a steel foundry, in a government supply depot, and serving for a time as deputy clerk of courts.

By the time he completed his education in mid-wartime he was ready to assume a pulpit. One of his best assets was a brand-new wife, herself a minister’s daughter.

The 12-year interim has left few marks beyond an occasional gray hair on the young man with the contagious smile.

We asked him to outline for us a “typical week,” which he proceeded to do.:

This is what we learned—regular office hours from 9 a.m. to 12 noon may find the pastor engaged in-church correspondence, the writing and editing of the weekly parish paper which goes into 1,100 homes, receiving visitors who want advice on myriad personal and-religious problems or questions involving lay activity in the church. He also uses such time to prepare the Sunday bulletin, his two classes in Religious instruction, a Sunday school lesson, outside speaking engagements, the Sunday sermon and mid-week services during the Lenten season, as well as planning future parish activities.

The afternoon,he continued, is theoretically devoted to hospital and home calls, as well as pastoral counseling for young couples about to be married, or couples facing marriage crises, or other people seeking help with other problems. Sometimes morning work spills aver.

The conclusion of such an eight-hour day, brings no “pipe and slipper” time to the Rev. Mr. Piper, however. If there is not a dinner meeting scheduled at church, other meetings begin at 7 or 7:30 p.m., frequently overlapping one with another.

Warming to his subject, the Rev. Mr. Piper admitted that occasionally a day “gets completely out of hand.” He chronicled a recent, one in which a morning of regular office work was followed by a funeral service at 1:30 p.m. He was home to help for a Cub Den meeting before 3 p.m., which lasted until 5:15 p.m. At 6:30 p.m., he was back at church giving catechetical instruction to the 33 children in the confirmation class. At 7:30 p.m., he met with the nominations committee for the slate of new officers for the church council. Fifteen minutes later he was meeting with the program committee of the Luther League, the young people’s group in the church. At 8 p.m., he had a counseling session with a young couple considering divorce; at 9:15 p.m., he met with the Canvass Committee of the church preparing for a financial drive beginning shortly, and the evening ended with a session on the revision of by-laws for the council and congregation.

Fridays are the days theoretically reserved for Mrs. Piper and the three young Pipers, in the comfortable parsonage on Brockman Blvd. Pastor Piper notes with genuine regret that the loss of his assistant pastor this month will probably make inroads into that day.

In view of such a schedule, we could scarcely bring ourselves to say it. “Any hobbies?” we croaked.

Golf is a neglected but old friend, he said. And then, he admitted, he has long had a yearning to do creative writing, “if,” he said wistfully, “someday I find time.”

He tried, at our request, to sum up the reasons that have made a dedicated churchman out of a man who, like other men, occasionally longs for some time to himself. His answer was simple and may well phrase the 20th century churchman’s credo:

“It is a great satisfaction,” he said, “to know that you are helping people.”

GOOD MORNING, PASTOR: Greeting congregation members by name is a pleasant aspect of the two worship services each Sunday in the Zion Lutheran Church. Average Sunday attendance for the services is about 1,000.

COUNSELING: Many hours of a minister’s week are taken up with counseling, either with young couples about to be married, as here, those seeking help with marriages gone awry, or congregation members with numerous other problems.

SERMON PREPARATION: One task that seldom varies from week to week is the preparation for Sunday’s sermon. Pastor Piper estimates that this should take at least 10 or 12 hours a week but admits that other duties sometimes infringe on the time.

MEN’S NIGHT: A Brotherhood pancake supper with the men of the church is relaxing diversion for the Rev. Mr. Piper, but also one of the many nights in the week when church meetings extend through the dinner hour.

THE FAMILY GATHERS: A rare minute finds the Piper family in the parsonage basement with the boys’ electric train. From left are Becky, 10, Mrs. Piper, Brian, 5, Bruce, 8, and the pastor.