Mastodon Too Big A Secret To Keep 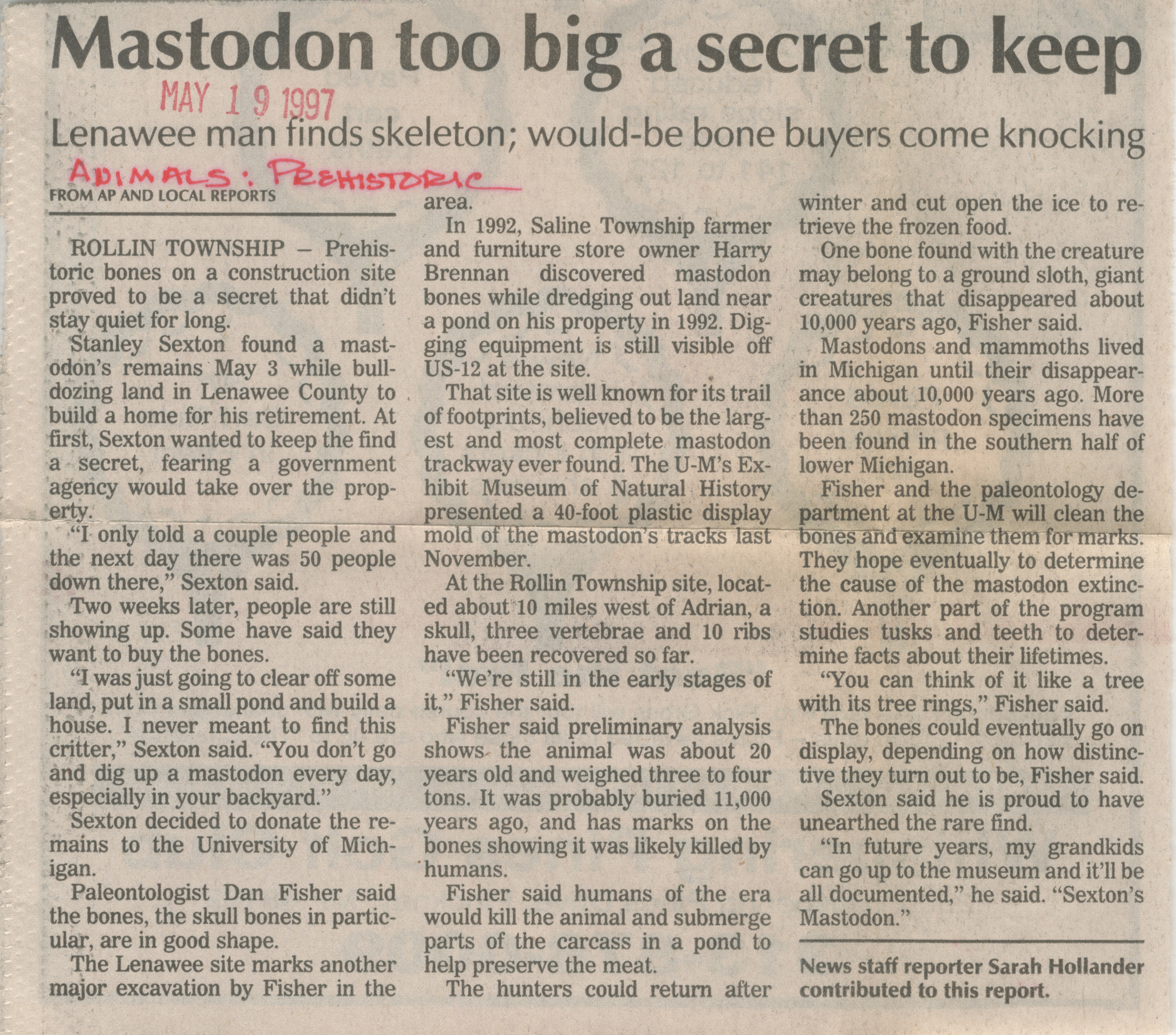 ﻿Mastodon too big a secret to keep

FROM AP AND LOCAL REPORTS

ROLLIN TOWNSHIP - Prehistoric bones on a construction site proved to be a secret that didn’t stay quiet for long.

Stanley Sexton found a mastodon’s remains May 3 while bulldozing land in Lenawee County to build a home for his retirement. At first, Sexton wanted to keep the find a secret, fearing a government agency would take over the property.

“I only told a couple people and the next day there was 50 people down there,” Sexton said.

Two weeks later, people are still showing up. Some have said they want to buy the bones.

“I was just going to clear off some land, put in a small pond and build a house. I never meant to find this critter,” Sexton said. ‘‘You don’t go and dig up a mastodon every day, especially in your backyard.”

Sexton decided to donate the remains to the University of Michigan.

Paleontologist Dan Fisher said the bones, the skull bones in particular, are in good shape.

The Lenawee site marks another major excavation by Fisher in the area.

In 1992, Saline Township farmer and furniture store owner Harry Brennan discovered mastodon bones while dredging out land near a pond on his property in 1992. Digging equipment is still visible off US-12 at the site.

That site is well known for its trail of footprints, believed to be the largest and most complete mastodon trackway ever found. The U-M’s Exhibit Museum of Natural History presented a 40-foot plastic display mold of the mastodon’s tracks last November.

At the Rollin Township site, located about 10 miles west of Adrian, a skull, three vertebrae and 10 ribs have been recovered so far.

“We’re still in the early stages of it,” Fisher said.

Fisher said preliminary analysis shows the animal was about 20 years old and weighed three to four tons. It was probably buried 11,000 years ago, and has marks on the bones showing it was likely killed by humans.

Fisher said humans of the era would kill the animal and submerge parts of the carcass in a pond to help preserve the meat.

The hunters could return after winter and cut open the ice to retrieve the frozen food.

One bone found with the creature may belong to a ground sloth, giant creatures that disappeared about 10,000 years ago, Fisher said.

Mastodons and mammoths lived in Michigan until their disappearance about 10,000 years ago. More than 250 mastodon specimens have been found in the southern half of lower Michigan.

Fisher and the paleontology department at the U-M will clean the bones and examine them for marks. They hope eventually to determine the cause of the mastodon extinction. Another part of the program studies tusks and teeth to determine facts about their lifetimes.

“You can think of it like a tree with its tree rings,” Fisher said.

The bones could eventually go on display, depending on how distinctive they turn out to be, Fisher said.

Sexton said he is proud to have unearthed the rare find.

“In future years, my grandkids can go up to the museum and it’ll be all documented,” he said. “Sexton’s Mastodon.”