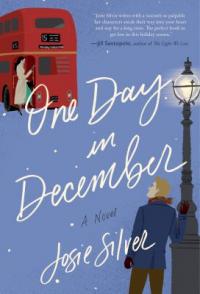 I have been saving the galley to One Day in December by Josie Silver for quite some time, waiting for a long stretch of uninterrupted time so I could kick back and enjoy it, and it did not disappoint. Called “unabashedly romantic”, it is the story of 2 Londoners who cross paths on a cold December evening and spend the next decade circling each other’s lives.

Hotel clerk Laurie James spotted a young man at a bus stop from her upper-deck seat.  They locked eyes and the connection was electric but before either one of them could make a move, the bus pulled away. Over the course of the next year, Laurie never stop looking for her “bus boy”. When she finally met him, he was Jack O’Mara - her best friend/roommate Sarah's new boyfriend. For different reasons, they decided not to tell Sarah while their deep connection remained -- even after Laurie took herself off to the wilds of Thailand and met the dreamy Robinson Crusoe/banker Oscar Ogilvy-Black.

“There’s no question where the book is going, but the pacing is just right, the tone warm, and the characters sympathetic, even when making dumb decisions. Anyone who believes in true love or is simply willing to accept it as the premise of a winding tale will find this debut an emotional, satisfying read.” (Kirkus Reviews)  Enough said!  For fans of Miss you by Kate Eberlen, and definitely if you have been bingeing on Love Actually this holiday season.

If you don't insist on a happy ending, may I suggest Harriet Paige's highly stylish Man With a Seagull on His Head ? - "(A) novel about... the electric charge that comes from real if unexpected connection. Beautiful, lyrical, and strangely moving...".

great review.. i love the…

great review.. i love the romance