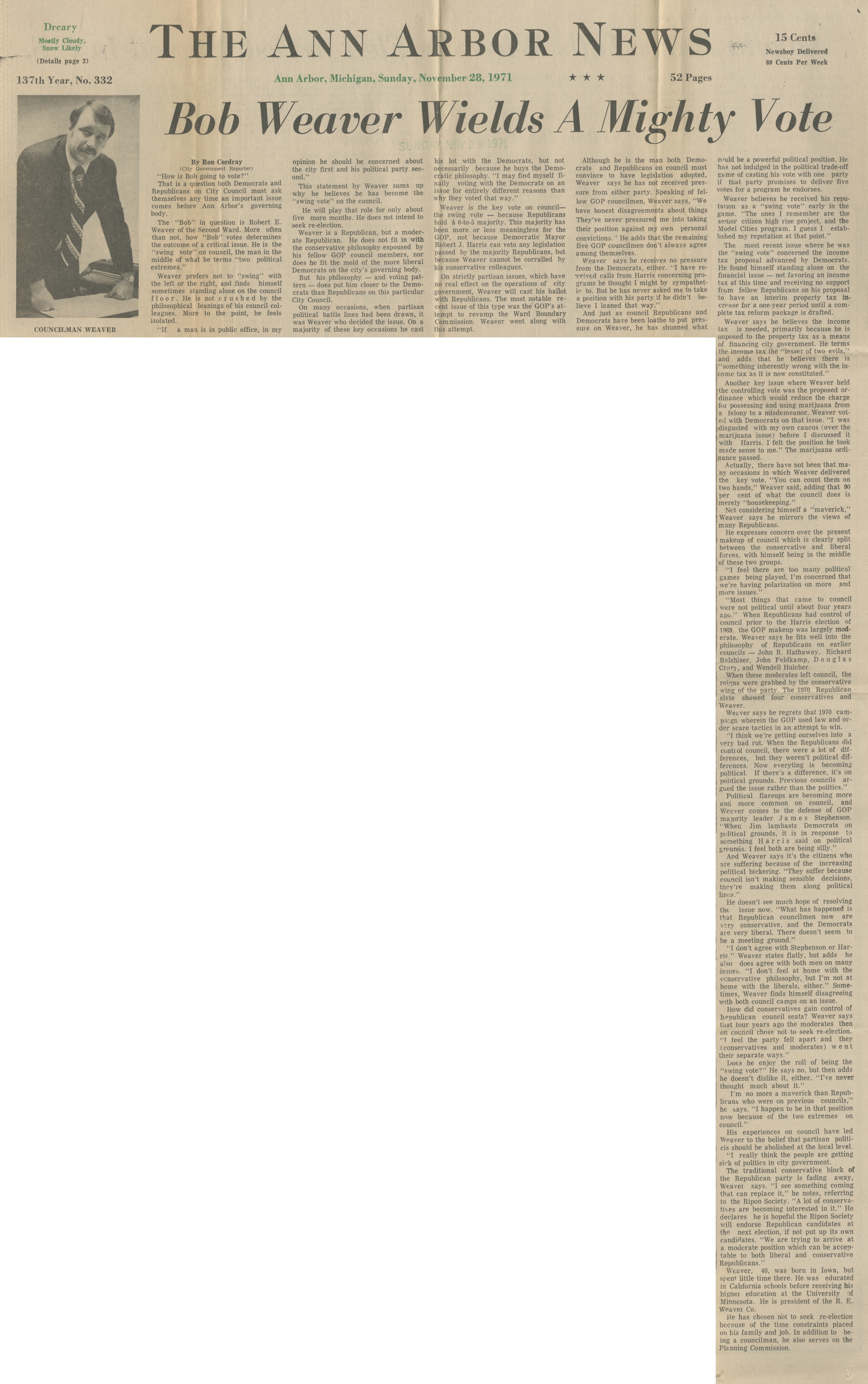 “How is Bob going to vote?”

That is a question both Democrats and Republicans on City Council must ask themselves any time an important issue comes before Ann Arbor’s governing body.

The “Bob” in question is Robert E. Weaver of the Second Ward. More often than not, how “Bob” votes determines the outcome of a critical issue. He is the “swing vote” on council, the man in the middle of what he terms “two political extremes.”

Weaver prefers not to “swing” with the left or the right, and finds himself sometimes standing alone on the council floor. He is not crushed by the philosophical leanings of his council colleagues. More to the point, he feels isolated.

“If a man is in public office, in my opinion he should be concerned about the city first and his political party second.”

This statement by Weaver sums up why he believes he has become the “swing vote” on the council.

He will play that role for only about five more months. He does not intend to seek re-election.

Weaver is a Republican, but a moderate Republican. He does not fit in with the conservative philosophy espoused by his fellow GOP council members, nor does he fit the mold of the more liberal Democrats on the city’s governing body.

But his philosophy — and voting pattern — does put him closer to the Democrats than Republicans on this particular City Council.

On many occasions, when partisan political battle lines had been drawn, it was Weaver who decided the issue. On a majority of these key occasions he cast his lot with the Democrats, but not because he buys the Democratic philosophy. “I may find myself finally voting with the Democrats on an issue for entirely different reasons than they why they voted that way.”

Weaver is the key vote on council— the swing vote — because Republicans hold a 6-to-5 majority. This majority has been more or less meaningless for the GOP, not because Democratic Mayor Robert J. Harris can veto any legislation passed by the majority Republicans, but because Weaver cannot be corralled by his conservative colleagues.

On strictly partisan issues, which have no real effect on the operations of city government, Weaver will cast his ballot with Republicans. The most notable recent issue of this type was the GOP’s attempt to revamp the Ward Boundary Commission. Weaver went along with this attempt.

Although he is the man both Democrats and Republicans on council must convince to have legislation adopted, Weaver says he has not received pressure from either party. Speaking of fellow GOP councilmen, Weaver says, “We have honest disagreements about things They’ve never pressured me into taking their position against my own personal convictions. ’ He adds that the remaining five GOP councilmen don’t always agree among themselves.

Weaver says he receives no pressure from the Democrats, either. “I have received calls from Harris concerning programs he thought I might by sympathetic to. But he has never asked me to take a position with his party if he didn’t believe I leaned that way.”

And just as council Republicans and Democrats have been loathe to put pressure on Weaver, he has shunned what could be a powerful political position. He has not indulged in the political trade-off game of casting his vote with one party if that party promises to deliver five votes for a program he endorses.

Weaver believes he received his reputation as a “swing vote” early in the game. “The ones I remember are the senior citizen high rise project, and the Model Cities program. I guess I established my reputation at that point.”

The most recent issue where he was the “swing vote” concerned the income tax proposal advanced by Democrats. He found himself standing alone on the financial issue — not favoring an income tax at this time and receiving no support from fellow Republicans on his proposal to have an interim property tax increase for a one-year period until a complete tax reform package is drafted.

Another key issue where Weaver held the controlling vote was the proposed ordinance which would reduce the charge possessing and using marijuana from felony to a misdemeanor. Weaver voted with Democrats on that issue. “I was disgusted with my own caucus (over the marijuana issue) before I discussed it with Harris. I felt the position he took made sense to me.” The marijuana ordinance passed.

Actually, there have not been that many occasions in which Weaver delivered the key vote. “You can count them on two hands,” Weaver said, adding that 90 per cent of what the council does is merely “housekeeping.”

Not considering himself a “maverick," Weaver says he mirrors the views of many Republicans.

He expresses concern over the present makeup of council which is clearly split between the conservative and liberal forces, with himself being in the middle of these two groups.

“I feel there are too many political games being played, I’m concerned that we’re having polarization on more and more issues.”

‘Most things that came to council were not political until about four years ago" When Republicans had control of council prior to the Harris election of 1969. the GOP makeup was largely moderate. Weaver says he fits well into the philosophy of Republicans on earlier councils — John R. Hathaway, Richard Balzhiser, John Feldkamp, Douglas Crary, and Wendell Hulcher.

When these moderates left council, the reins were grabbed by the conservative wing of the party. The 1970 Republican slate showed four conservatives and Weaver.

Weaver says he regrets that 1970 campaign wherein the GOP used law and order scare tactics in an attempt to win.

“I think we’re getting ourselves into a very bad rut. When the Republicans did control council, there were a lot of differences, but they weren’t political differences. Now everyting is becoming political. If there’s a difference, it’s on political grounds. Previous councils argued the issue rather than the politics.”

Political flareups are becoming more and more common on council, and Weaver comes to the defense of GOP majority leader James Stephenson. “When Jim lambasts Democrats on political grounds, it is in response to something Harris said on political grounds. I feel both are being silly.”

And Weaver says it’s the citizens who are suffering because of the increasing political bickering. “They suffer because council isn’t making sensible decisions, they’re making them along political
lines."

He doesn’t see much hope of resolving the issue now. “What has happened is that Republican councilmen now are very conservative, and the Democrats are very liberal. There doesn’t seem to be a meeting ground.”

“I don’t agree with Stephenson or Harris.” Weaver states flatly, but adds he also does agree with both men on many issues. “I don’t feel at home with the conservative philosophy, but I’m not at home with the liberals, either.” Sometimes, Weaver finds himself disagreeing with both council camps on an issue.

How did conservatives gain control of Republican council seats? Weaver says that four years ago the moderates then on council chose not to seek re-election.

’ “I feel the party fell apart and they (conservatives and moderates) went their separate ways.”

Does he enjoy the roll of being the “swing vote?” He says no, but then adds he doesn’t dislike it, either. “I’ve never thought much about it.”

I’m no more a maverick than Republicans who were on previous councils,” he says. “I happen to be in that position now because of the two extremes on council.”

His experiences on council have led Weaver to the belief that partisan politicis should be abolished at the local level.

“I really think the people are getting sick of politics in city government.

Weaver, 40, was born in Iowa, but spent little time there. He was educated in California schools before receiving his higher education at the University of Minnesota. He is president of the R. E. Weaver Co.

He has chosen not to seek re-election because of the time constraints placed on his family and job. In addition to being a councilman, he also serves on the Planning Commission.