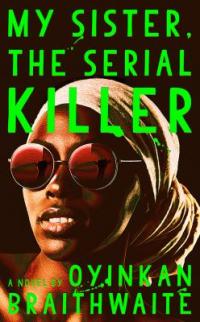 My Sister, the Serial Killer *, Nigerian Oyinkan Braithwaite’s debut novel has been called “(p)ulpy, peppery and sinister, served up in a comic deadpan…This scorpion-tailed little thriller leaves a response, and a sting, you will remember.” (The New York Times)

Petite and light-skinned, beautiful and charismatic Ayoola could do no wrong growing up in her complicated family. Her older sister Korede knows better. A nurse at Lago’s St. Pete’s Hospital, she is the one who cleans up the bloody mess each time Ayoola, claiming self-defense, kills a boyfriend (“Three and they label you a serial killer.”)  Korede is willing to protect Ayoola until her secret crush, Dr. Tade Otumu becomes smitten with Ayoola on one of her impromptu visits to the hospital. Now, the long-suffering, overlooked and underappreciated Korede must make a choice.

“(W)hat makes Braithwaite’s first novel stand out from others in this genre (gothic mystery) is the unobtrusively sly approach she takes to the conventions of “black widow” storytelling and the appealing deadpan voice of the jittery yet world-weary Korede. Along the way, there are scattered glimpses of life in Lagos, most acidly when Korede deals with the routine corruption involved in a traffic stop.” (Kirkus Reviews)  Will appeal to Dexter fans, and begs the question - "how much will we sacrifice for the sake of family?" as in Stay with Me by fellow Nigerian Ayobami Adebayo.