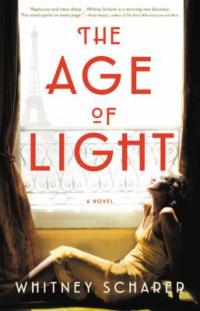 The Age of Light * * * by Whitney Scharer opens on a hot July day in 1966 at a Sussex farmhouse where Lee Miller is throwing a sumptuous dinner party for her Vogue editor, trying to forestall her dismissal as the magazine’s food writer for perpetually missing deadlines. After a series of comic mishaps that threaten to ruin the dinner (not the least being Lee’s secret drinking), she is shocked to find her new assignment is to write about her years with Surrealist artist Man Ray. Lee finally agrees, with one caveat: not his photos, hers.

1929. The 22 year-old Lee - Vogue’s cover-girl, famous for her staggering beauty, arrives in Paris intending to forge a new identity as an artist. As her funds run low, she talks her way into assisting Man Ray in his chaotic studio, learning every aspect of the artistic process. Their personal and professional lives soon become intimately entwined. The student/muse becomes a collaborator and innovator - a fact that grates on the much-older and egotistical Ray, and eventually leads to bitter betrayals on both of their parts.

“Scharer sets her viewfinder selectively, focusing on her heroine’s insecurities as much as her accomplishments as an artist; her hunger to be more than “a neck to hold pearls, a slim waist to show off a belt” is contrasted with her habit of solving problems by simply leaving. The price for Lee is steep, but it makes for irresistible reading. Sexy and moving.” (Kirkus Reviews)

Check out these titles in our Fine Arts collection for more on the life and art of Lee Miller, especially Lee Miller's War: Photographer and Correspondent With the Allies in Europe, 1944-45, which were among the first photographs of the death camps to reach the American public.  For readers who enjoyed The Muralist by Barbara A. Shapiro, and The Light of Paris by Eleanor Brown.