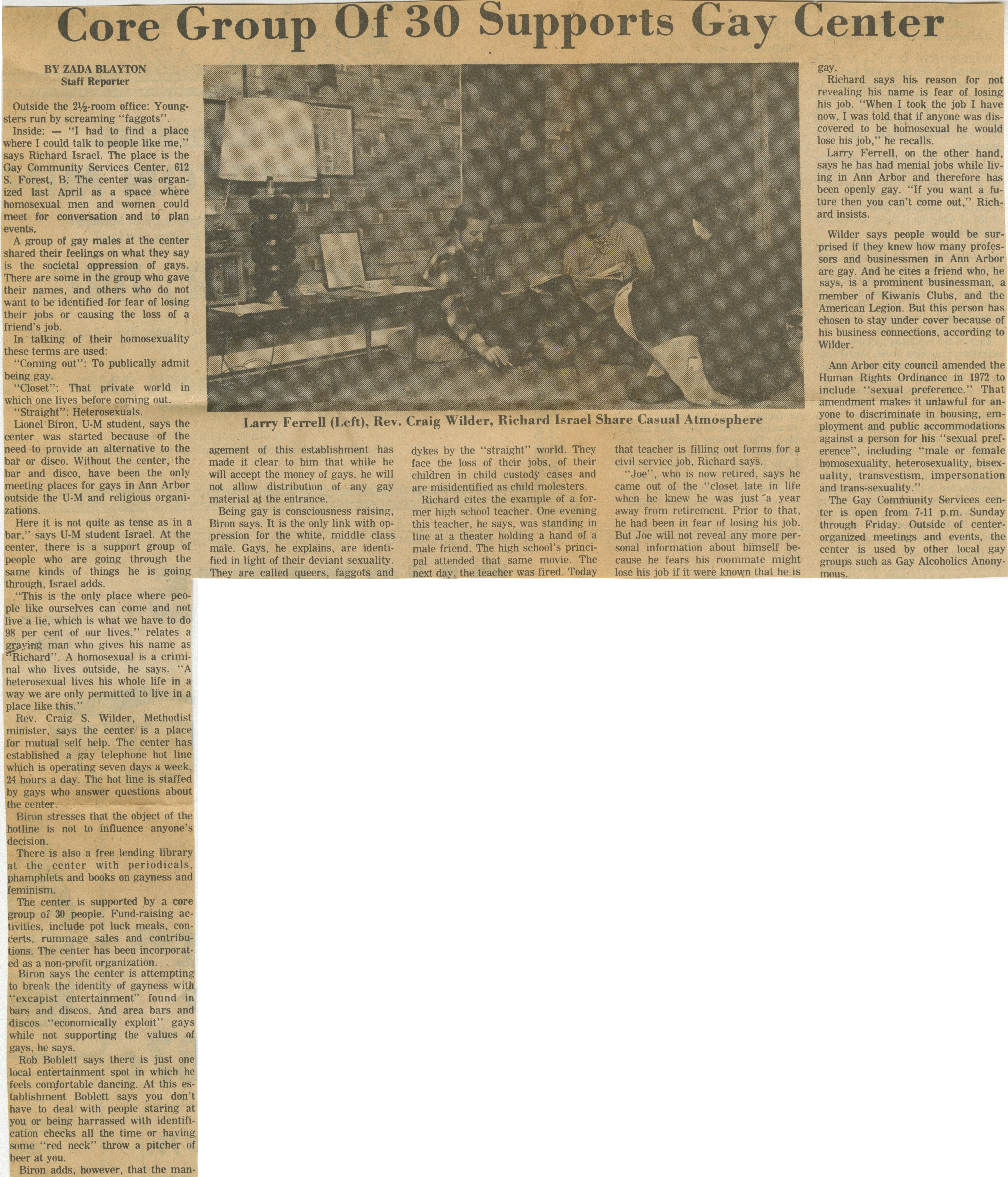 Outside the 2 1/2 -room office: Youngsters run by screaming “faggots”.

Inside: — “I had to find a place where I could talk to people like me.” says Richard Israel. The place is the Gay Community Services Center, 612 S. Forest, B. The center was organized last April as a space where homosexual men and women could meet for conversation and to plan events.

A group of gay males at the center shared their feelings on what they say is the societal oppression of gays. There are some in the group who gave their names, and others who do not want to be identified for fear of losing their jobs or causing the loss of a friend's job.

In talking of their homosexuality these terms are used:

“Coming out”: To publically admit being gay.

“Closet”: That private world in which one lives before coming out.

Lionel Biron, U-M student, says the center was started because of the need to provide an alternative to the bar and disco. Without the center, the bar and disco, have been the only meeting places for gays in Ann Arbor outside the U-M and religious organizations.

"Here it is not quite as tense as in a bar,” says U-M student Israel. At the center, there is a support group of people who are going through the same kinds of things he is going through, Israel adds.

"This is the only place where people like ourselves can come and not live a lie, which is what we have to do 98 per cent of our lives,” relates a graying man who gives his name as "Richard". A homosexual is a criminal who lives outside, he says. “A heterosexual lives his whole life in a way we are only permitted to live in a place like this.”

Rev. Craig S. Wilder, Methodist minister, says the center is a place for mutual self help. The center has established a gay telephone hot line which is operating seven days a week, 24 hours a day. The hot line is staffed by gays who answer questions about the center.

Biron stresses that the object of the hotline is not to influence anyone's decision.

There is also a free lending library at the center with periodicals, phamphlets and books on gayness and feminism.

The center is supported by a core group of 30 people. Fund-raising activities, include pot luck meals, concerts, rummage sales and contributions. The center has been incorporated as a non-profit organization.

Biron says the center is attempting to break the identity of gayness with “excapist entertainment” found in bars and discos. And area bars and discos “economically exploit" gays while not supporting the values of gays, he says.

Rob Boblett says there is just one local entertainment spot in which he feels comfortable dancing. At this establishment Boblett says you don’t have to deal with people staring at you or being harrassed with identification checks all the time or having some "red neck” throw a pitcher of beer at you.

Biron adds, however, that the management of this establishment has made it clear to him that while he will accept the money of gays, he will not allow distribution of any gay material at the entrance.

Being gay is consciousness raising, Biron says. It is the only link with oppression for the white, middle class male. Gays, he explains, are identified in light of their deviant sexuality. They are called queers, faggots; and dykes by the “straight” world. They face the loss of their jobs, of their children in child custody cases and are misidentified as child molesters.

Richard cites the example of a former high school teacher. One evening this teacher, he says, was standing in line at a theater holding a hand of a male friend. The high school’s principal attended that same movie. The next day, the teacher was fired. Today that teacher is filling out forms for a civil service job, Richard says.

“Joe”, who is now retired, says he came out of the “closet late in life when he knew he was just a year away from retirement. Prior to that, he had been in fear of losing his job. But Joe will not reveal any more personal information about himself because he fears his roommate might lose his job if it were known that he is gay.

Richard says his reason for not revealing his name is fear of losing his job. “When I took the job I have now. I was told that if anyone was discovered to be homosexual he would lose his job,” he recalls.

Larry Ferrell, on the other hand, says he has had menial jobs while living in Ann Arbor and therefore has been openly gay. “If you want a future then you can’t come out,” Richard insists.

Wilder says people would be surprised if they knew how many professors and businessmen in Ann Arbor are gay. And he cites a friend who, he says, is a prominent businessman, a member of Kiwanis Clubs, and the American Legion. But this person has chosen to stay under cover because of his business connections, according to Wilder.

Ann Arbor city council amended the Human Rights Ordinance in 1972 to include “sexual preference.” That amendment makes it unlawful for anyone to discriminate in housing, employment and public accommodations against a person for his “sexual preference”, including “male or female homosexuality, heterosexuality, bisexuality, transvestism, impersonation and trans-sexuality.”

The Gay Community Services center is open from 7-11 p.m. Sunday through Friday. Outside of center-organized meetings and events, the center is used by other local gay groups such as Gay Alcoholics Anonymous.