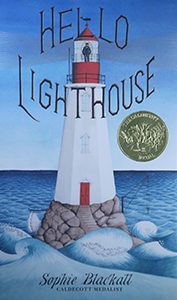 This past Monday was a big day in children’s literature! Award winners were announced in many categories at the midwinter conference of the American Library Association.

The John Newbery Medal is awarded for the most outstanding contribution to children's literature. This year’s winner is Merci Suarez Changes Gears by Meg Madina. Honors were also awarded to The Night Diary by Veera Hiranandani, and The Book of Boy by Catherine Gilbert Murdock.

The Randolph Caldecott Medal is awarded to the illustrator of the most distinguished American picture book for children. The winner is Hello Lighthouse by Sophie Blackall. Four honor books were also announced, including Alma and How She Got Her Name by Juana Martinez-Neal, A Big Mooncake for Little Star by Grace Lin, The Rough Patch by Brian Lies, and Thank You, Omu! by Oge Mora.