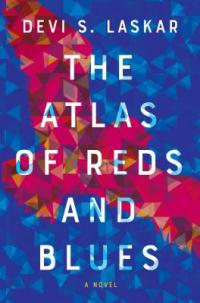 The Atlas of Reds and Blues,*  poet Devi S. Laskar’s fictional debut is at once powerful, difficult, yet timely and necessary reading.

Drawing on the author’s own experience, the narrative takes place over the course of a single morning, as a woman, known only as Mother lies sprawled on her driveway in an upscale Atlanta suburb, bleeding from a gunshot wound.

In short, graphic chapters, Mother recounts lucidly of her girlhood in North Carolina of immigrant parents, the family’s visits to India, her experience as a reporter in a hostile work environment, her relationship with a husband who is virtually absent, leaving her to raised their three daughters in a community that is fixated on their otherness. While her daughters are harassed and bullied at school, Mothers endures zealous traffic cops, “discrimination, cruelty, and stupidity in routine circumstances” because of the color of her skin.

The Atlas of Reds and Blues grapples with the complexities of the second-generation American experience and what it means to be a woman of color in today's America. “Laskar's bravura drama of one woman pushed to the brink by racism is at once sharply relevant and tragically timeless.” (Booklist)

Will appeal to fans of The Hate u Give by Angie Thomas.