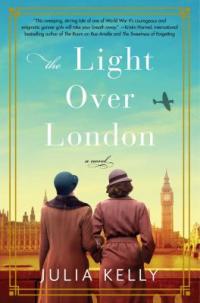 The Light Over London, a departure for Julia Kelly from her historical romances (and the racy contemporary romances written as Julia Blake), is a charming imagining of the Ack-Ack girls - members of the British Auxiliary Territorial Service (ATS) that helped operate Anti-Aircraft Guns in the defense of Britain from German bombing raids during WWII.

Newly-single antique dealer Cara Hargraves uncovers a tin of letters, photographs and a WWII-era diary while preparing a manor house for an estate sale. Examining the contents, Cara is intrigued and hopes to return it to its owner (identified only as L.K.) or her family. She also hopes the diary might encourage her grandmother to share her own war secrets.  With little success, she reluctantly accepts the help of her new neighbor Liam (dishy and single), a history academic.

In 1941, 19 year-old Louise Keene, a shop assistant, lived with her parents in an isolated Cornish village. Bright and ambitious she yearned for a larger life and was readily wept off her feet by Flight Lieutenant Paul Bolton, a dashing RAF pilot stationed at a local base. When Paul was deployed, Louise ran away to London to join the women’s branch of the British Army as a Gunner Girl. Louise and Paul wrote to each other and even married during a weekend leave, until a bundle of her letters to him were returned unanswered.

“Kelly has crafted two convincing, conflicted heroines in Cara and Louise, and the resolution of Louise's romance is satisfyingly empowering. Hand this to fans of Jennifer Egan's Manhattan Beach (2017) and other tales of the vital roles played by women in wartime.” (Booklist)  The Alice Network immediately comes to mind;   and don't forget The Lost Girls of Paris, the latest from Pam Jenoff.