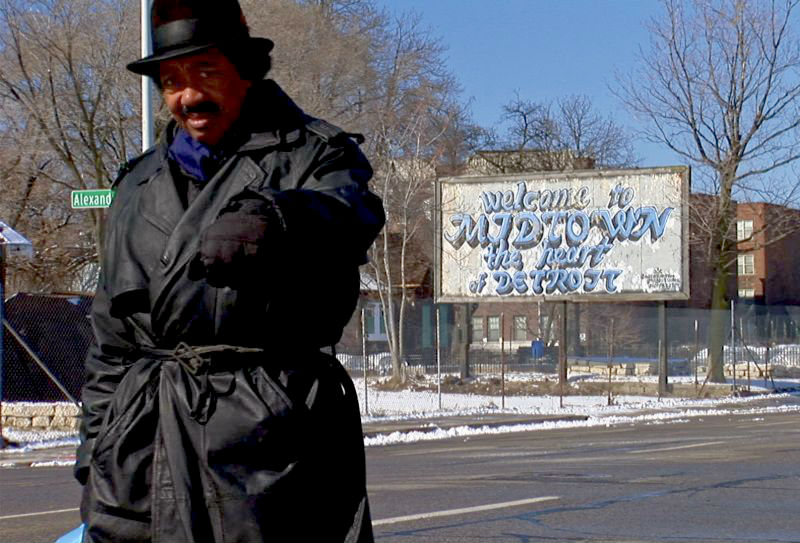 Still from the Last Days of Chinatown.

Juror Presentation: HAPPINESS IS A WARM PROJECTOR: Films by Bryan Konefsky
1 pm | Michigan Theater Screening Room | Free
For years, Bryan Konefsky’s moving-image work has struggled with the discomfort of being a citizen-consumer within the trajectory of the United States’ bankrupt history of spiritual righteousness, entitlement, and hubris. The structure of these cinematic interventions often takes the form of essay films or what Mis ALT screening series curator Tessa Siddle characterizes as “conversations with the mirror.” At their worst, these works could be categorized as solipsistic. At their best, these short films consider what filmmaker Trinh Minh-ha describes as the value of storytelling as history.

Last Days of Chinatown with Church Street, We Are Still Here
Feature in Competition
5 pm | Michigan Theater Screening Room
In Last Days of Chinatown (Nicole Macdonald), when the largest sports development in the country takes over Detroit, one place is built; another, erased. And in Church Street, We Are Still Here (David Donar), Church Street was a thriving center for African American commerce in Anderson, South Carolina, from around 1907 until 1980, when most of the buildings were torn down to make way for a parking lot. The citizens on Church Street were educated professionals and business owners who served as role models.

Films in Competition 2
5:15 pm | Michigan Theater Main Auditorium
Recent experimental, documentary, and animated films: It all came to pass, All fell into my hands like a five-petalled leaf, But there has to be more (Sergei Sviatchenko and Noriko Okaku), As Above, So Below (Cooper Holoweski), TÅKE (Inger Lise Hansen), ANATOPIES (Jean-Baptiste Decavèle), Reverie of the Puppets (Kathy Rose), The Cage of Sand (Edward Rankus).

Ethnographic Frictions
Special Program
7 pm | Michigan Theater Screening Room
The films in this program push hard against the walls of epistemological givens and scholarly conventions to open up new ways of exploring and understanding our world. Often in ways both subtle and penetrating, they offer pointed reflection on -- as well as critique of -- the very purpose and forms of ethnography. Though in conversation with the conventions and histories of ethnographic film and anthropological endeavors, the people who made these films -- including anthropologists, filmmakers, artists, dancers, choreographers, musicians, poets, and novelists -- exceed and defy the limits of a disciplinary purview, and their contributions expand the modes through which we convey, document, and express the human condition. Curated and presented by Dr. Julia Yezbick.

Closing Time
Feature in Competition
9 pm | Michigan Theater Screening Room
Closing Time (Nicole Vögele). Three a.m., Zhongzheng Road, Taipei. The traffic of a 24/7-society throbs through the metropolis in constant waves. Bordered by a multi-lane through street with a big freeway towering above it lies the night eatery Little Plates with Rice. Here Mr. Kuo and his wife Mrs. Lin cook for the city’s sleepless. They work at night and sleep through the days -- trying to keep afloat.

Afterparty
10 pm-2 am | LoFi | $10, Free with AAFF Pass
Performance by Jerusalem In My Heart + Ben Shemie and DJ set by Jeremy Wheeler