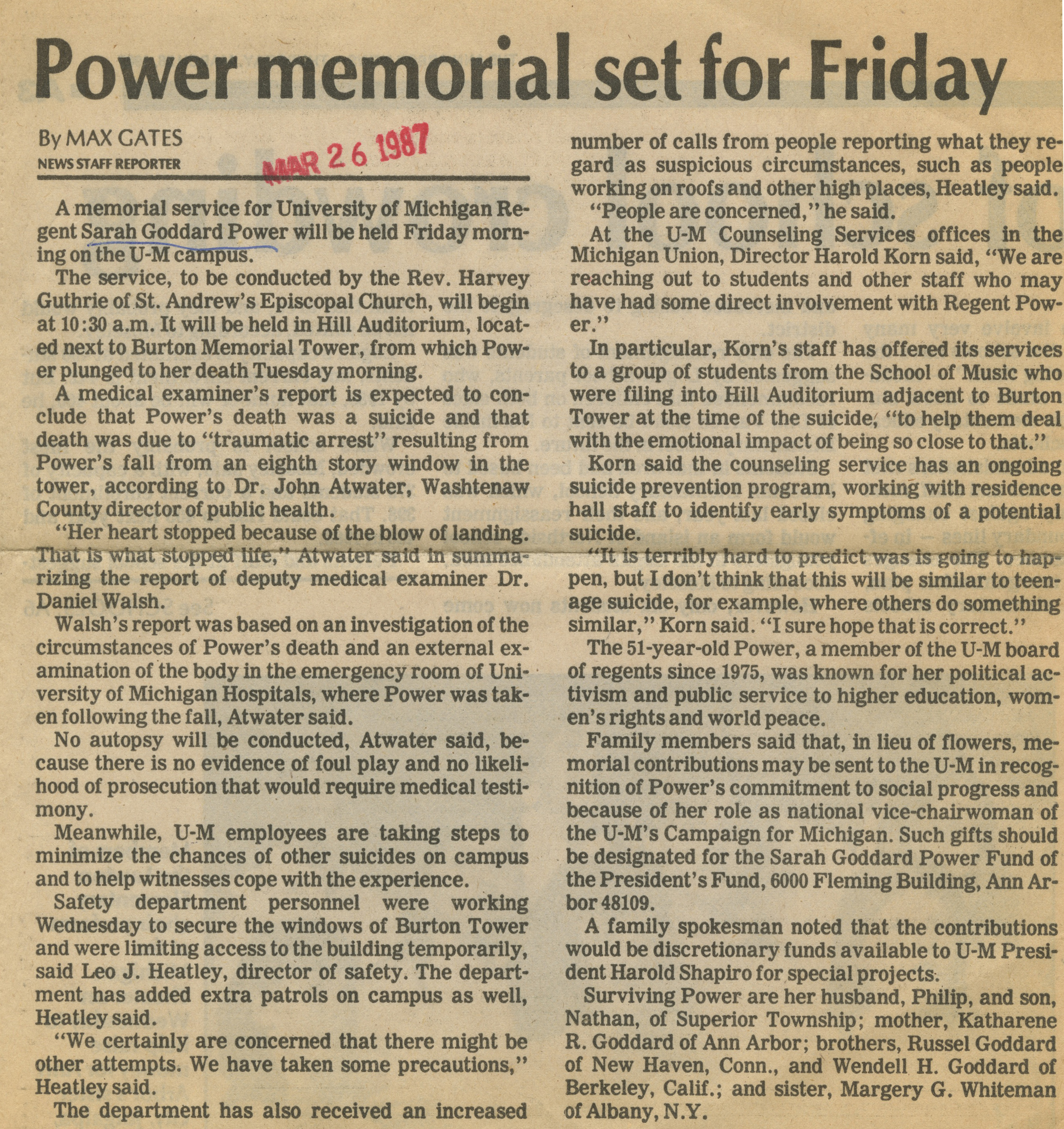 A memorial service for University of Michigan Regent Sarah Goddard Power will be held Friday morning on the U-M campus.
The service, to be conducted by the Rev. Harvey Guthrie of St. Andrew's Episcopal Church, will begin at 10:30 a.m. It will be held in Hill Auditorium, located next to Burton Memorial Tower, from which Power plunged to her death Tuesday morning.
A medical examiner's report is expected to conclude that Power's death was a suicide and that death was due to "traumatic arrest" resulting from Power's fall from an eighth story window in the tower, according to Dr. John Atwater, Washtenaw County director of public health.
"Her heart stopped because of the blow of landing. That is what stopped life, Atwater said in summarizing the report of deputy medical examiner Dr. Daniel Walsh.
Walsh's report was based on an investigation of the circumstances of Power's death and an external examination of the body in the emergency room of University of Michigan Hospitals, where Power was taken following the fall, Atwater said.
No autopsy will be conducted, Atwater said. be. cause there is no evidence of foul play and no likelihood of prosecution that would require medical testimony.
Meanwhile, U-M employees are taking steps to minimize the chances of other suicides on campus and to help witnesses cope with the experience.
Safety department personnel were working Wednesday to secure the windows of Burton Tower and were limiting access to the building temporarily, said Leo J. Heatley, director of safety. The department has added extra patrols on campus as well, Heatley said.
“We certainly are concerned that there might be other attempts. We have taken some precautions," Heatley said.
The department has also received an increased number of calls from people reporting what they regard as suspicious circumstances, such as people working on roofs and other high places, Heatley said.
"People are concerned,” he said.
At the U-M Counseling Services offices in the Michigan Union, Director Harold Korn said, “We are reaching out to students and other staff who may have had some direct involvement with Regent Power."
In particular, Korn's staff has offered its services to a group of students from the School of Music who were filing into Hill Auditorium adjacent to Burton Tower at the time of the suicide, "to help them deal with the emotional impact of being so close to that."
Korn said the counseling service has an ongoing suicide prevention program, working with residence hall staff to identify early symptoms of a potential suicide.
“It is terribly hard to predict was is going to hap pen, but I don't think that this will be similar to teenage suicide, for example, where others do something similar,” Korn said. "I sure hope that is correct."
The 51-year-old Power, a member of the U-M board of regents since 1975, was known for her political activism and public service to higher education, women's rights and world peace.
Family members said that, in lieu of flowers, memorial contributions may be sent to the U-M in recognition of Power's commitment to social progress and because of her role as national vice-chairwoman of the U-M's Campaign for Michigan. Such gifts should be designated for the Sarah Goddard Power Fund of the President's Fund, 6000 Fleming Building, Ann Arbor 48109.
A family spokesman noted that the contributions would be discretionary funds available to U-M President Harold Shapiro for special projects.
Surviving Power are her husband, Philip, and son, Nathan, of Superior Township; mother, Katharene R. Goddard of Ann Arbor; brothers, Russel Goddard of New Haven, Conn., and Wendell H. Goddard of Berkeley, Calif.; and sister, Margery G. Whiteman of Albany, N.Y.