A Day To Celebrate At The Annual Hash Bash 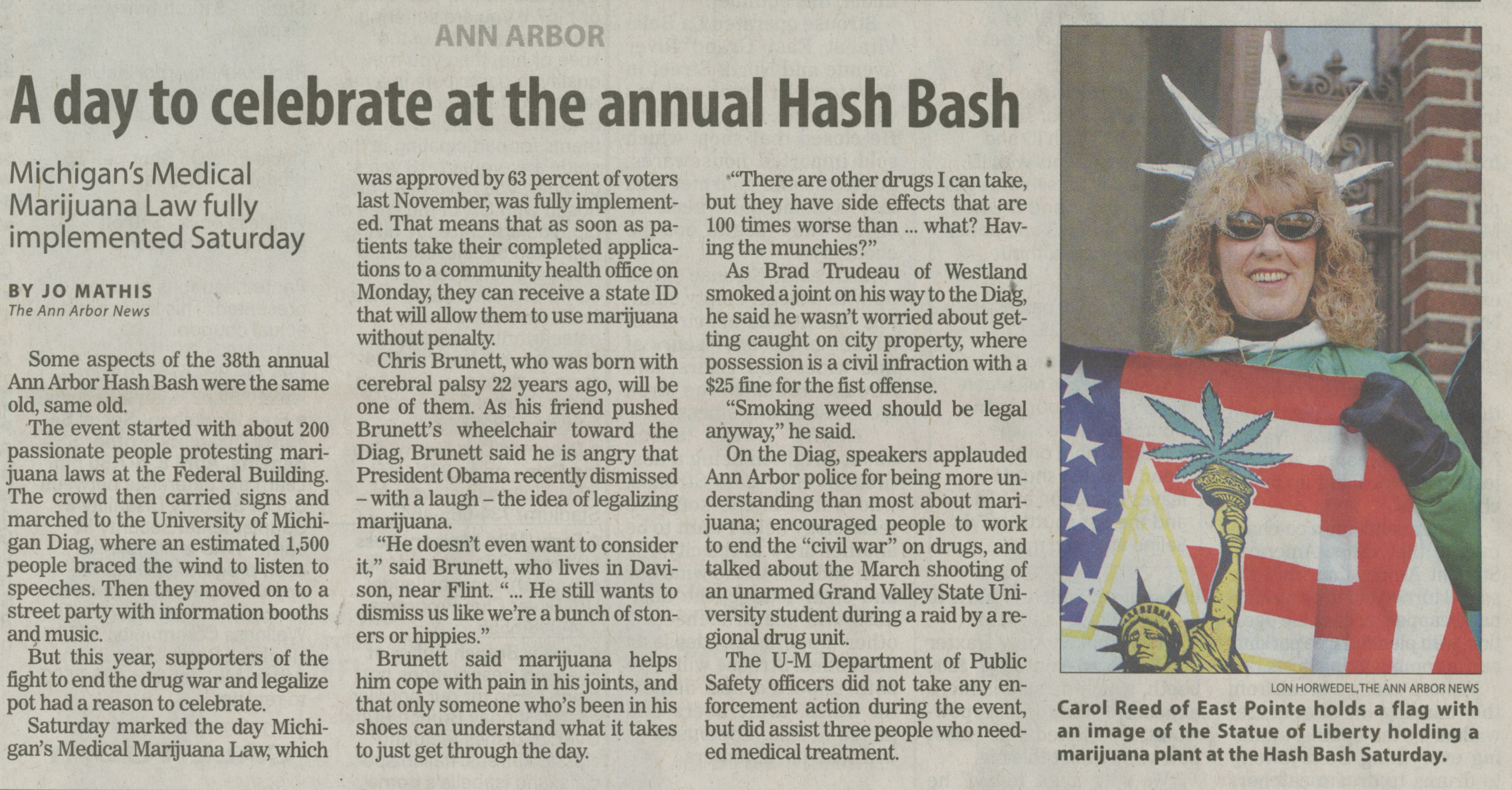 A day to celebrate at the annual Hash Bash

Some aspects of the 38th annual Ann Arbor Hash Bash were the same old, same old.

The event started with about 200 passionate people protesting marijuana laws at the Federal Building. The crowd then carried signs and marched to the University of Michigan Diag, where an estimated 1,500 people braced the wind to listen to speeches. Then they moved on to a street party with information booths and music.

But this year, supporters of the fight to end the drug war and legalize pot had a reason to celebrate.

Saturday marked the day Michigan’s Medical Marijuana Law, which was approved by 63 percent of voters last November, was fully implemented. That means that as soon as patients take their completed applications to a community health office on Monday, they can receive a state ID that will allow them to use marijuana without penalty.

Chris Brunett, who was bom with cerebral palsy 22 years ago, will be one of them. As his friend pushed Brunett’s wheelchair toward the Diag, Brunett said he is angry that President Obama recently dismissed - with a laugh - the idea of legalizing marijuana.

“He doesn’t even want to consider it,” said Brunett, who lives in Davison, near Flint. “... He still wants to dismiss us like we’re a bunch of stoners or hippies.”

Brunett said marijuana helps him cope with pain in his joints, and that only someone who’s been in his shoes can understand what it takes to just get through the day.

“There are other drugs I can take, but they have side effects that are 100 times worse than ... what? Having the munchies?”

As Brad Trudeau of Westland smoked a joint on his way to the Diag, he said he wasn’t worried about getting caught on city property, where possession is a civil infraction with a $25 fine for the fist offense.

“Smoking weed should be legal anyway,” he said.

On the Diag, speakers applauded Ann Arbor police for being more understanding than most about marijuana; encouraged people to work to end the “civil war” on drugs, and talked about the March shooting of an unarmed Grand Valley State University student during a raid by a regional drug unit.

The U-M Department of Public Safety officers did not take any enforcement action during the event, but did assist three people who needed medical treatment.

Carol Reed of East Pointe holds a flag with an image of the Statue of Liberty holding a marijuana plant at the Hash Bash Saturday.