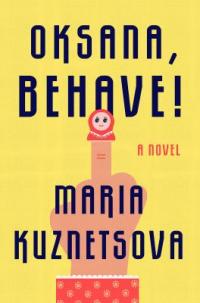 Oksana Konnikova’s family emigrated from Kiev to the United State when she was 7. Her father, a physicist and a gifted mathematician, moonlighted as a pizza deliveryman to support the family - all so Oksana could have a brighter future. While gifted as a student, Oksana is irreverent, impulsive, and irrepressible - from calling 911 to report that her grandmother is trying to kill her; maiming a school bully; blackmailing the Principal to fix an election and destroying a family in the process; to hooking up with her high school track coach. No wonder her mother was constantly pleading with her:  “Oksana, Behave!”.  Her college years passed in a fog of booze, drugs, and promiscuity after the death of her doting father, and persisted into adulthood. “And yet despite this, she is an utterly compelling, deeply flawed, and completely endearing character… Kuznetsova has created a heroine for the ages in her sparkling, piercingly insightful debut.” (Booklist)

When Oksana visits her grandmother in Yalta and learns about her wartime past and her lost loves, she begins to see just how much alike she and her grandmother are, and comes to a new understanding of how to embrace life and love without causing harm to the people dearest to her.

“An immigrant’s coming-of-age tale done with brio.” (KIrkus). Will appeal to fans of The Russian Debutante's Handbook by Gary Shteyngart.