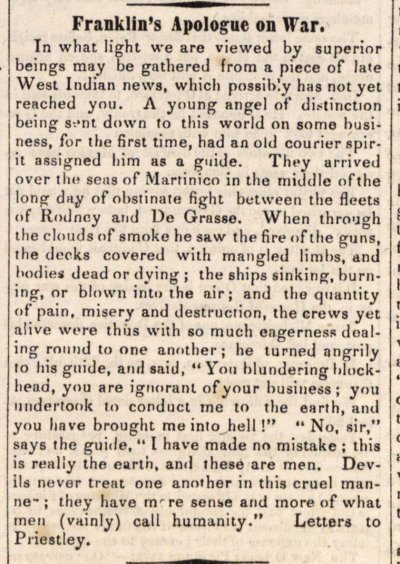 In what light we are viewed by superior beings may be gathered from a piece of late West Indian news, whicli possibly hns not yet reached you. A young angel of' dUtinction bcing s:-nt. down to this world on some business, for the first time, had an old courier spirit assigned liim as a guide. They arrived over tht seus of Martinico in the middle ofthe long dny of obstinate fight butween the flftoti of Rodncy and De Grasse. When through the clouds of smoke he saw the fire ofthe guns, the docks covered with mangled limbs, and bodiei dead or dying ; the ships sinking, burning, or blown into the air; and the quantity of pain, misery and destruction, the crews yet alive were thÃ¼s with so mucli eagerness doaling round to one amitber; he turned angrily to his gnide, arwi said, "You blundering blnckhead, you are ignoranl ofyour business; you midertook to conduct me to the earth, and you have brought me into heil !" " No, sir," says the guide, " l have made no mistake ; this is really the earth, and these are men. Devils never treat one another in this cruel manne- ; they have m're sense and more of what men (vainly) cali hutnanity." Letters to Priestley.