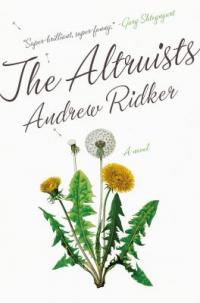 The Altruists * by twentysomething Andrew Ridker is “(b)eautifully written, with witty, pitch-perfect dialogue and fascinating characters... (this) impressive, deeply satisfying debut is an extraordinarily insightful look at a family broken apart by loss and struggling to find a way back to each other and themselves.“ (Booklist)

Two years after losing his wife Francine to breast cancer, Arthur Alter is about to lose his home too. An un-tenured Engineering professor struggling to keep his job at a private university in St. Louis, he no longer could afford his too-large house. His two grown children have flown the coop, right after the funeral - taking with them their not-too-shabby inheritance from Francine (Arthur was written out of the will when she discovered his affair with a younger colleague).

Closeted in his expensive Brooklyn apartment, 31-year-old Ethan is in debt, having quit his consulting job, and addicted to online shopping.  Maggie, a recent grad and a would-be do-gooder, embraces self-imposed poverty(and starvation) by taking low-paying jobs in her Queens neighborhood. When Ethan and Maggie accept Arthur’s invitation for a home visit, none of them suspect the others’ secret agenda for this reunion.

“Ridker spins delicate moral dilemmas in a novel that grows more complex and more uproarious by the page, culminating in an unforgettable climax.” (Entertainment Weekly). A readalike for The Nest by Cynthia D’Aprix Sweeney, and The Heirs by Susan Rieger. For another Midwestern America family saga that confronts the divide between baby boomers and their millennial offspring, try The Middlesteins by Jami Attenberg.