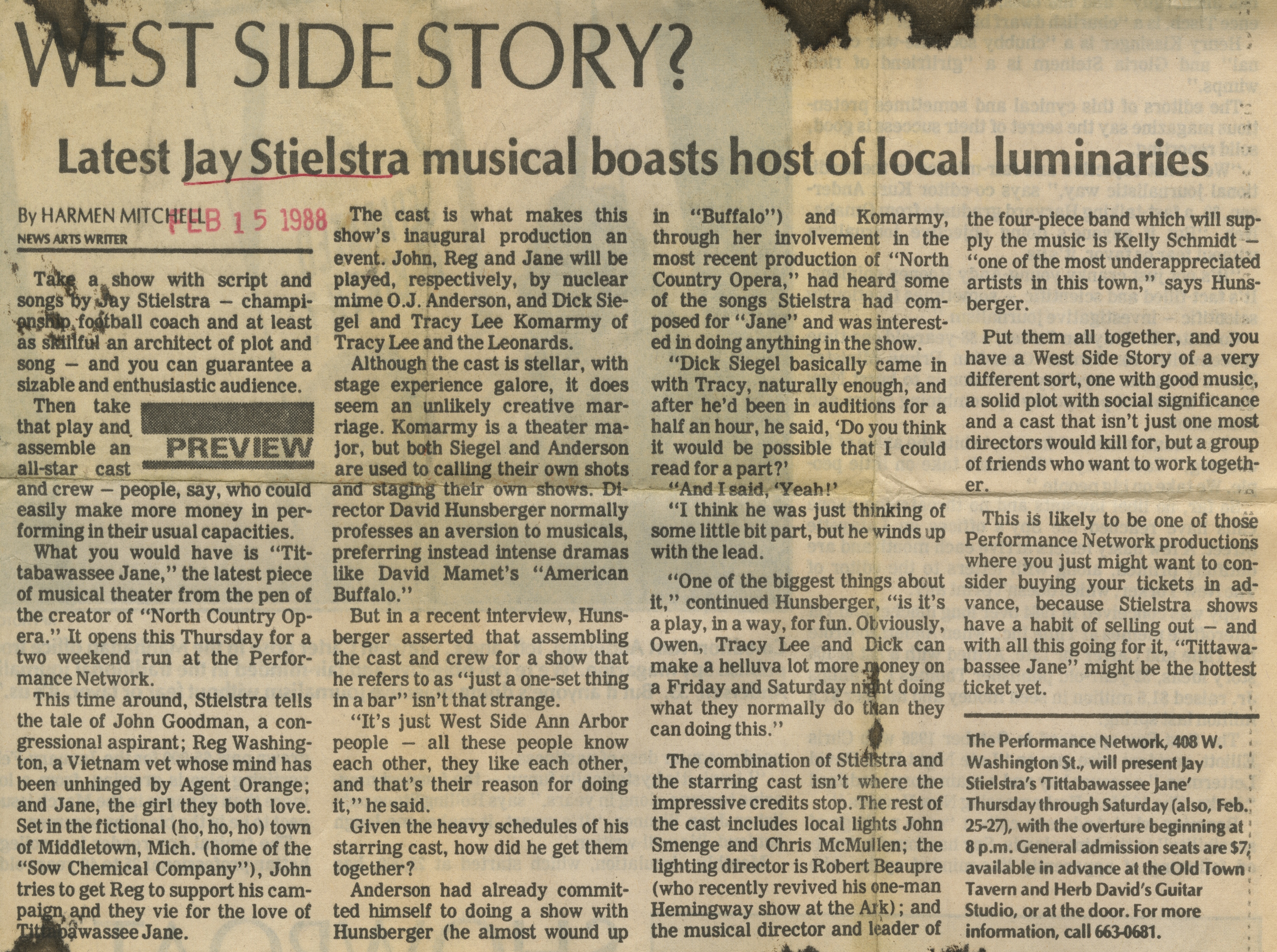 Take a show with script and songs by Jay Stielstra –  championship football coach and at least as skillful an architect of plot and song – and you get a sizable and enthusiastic audience.

Then take that play and assemble an all-star cast and crew - people, say, who could easily make more money in performing in their usual capacities.

What you would have is “Tit-tabawassee Jane,” the latest piece of musical theater from the pen of the creator of “North Country Opera.” It opens this Thursday for a two weekend run at the Performance Network.

This time around, Stielstra tells the tale of John Goodman, a congressional aspirant; Reg Washington, a Vietnam vet whose mind has been unhinged by Agent Orange; and Jane, the girl they both love. Set in the fictional (ho, ho, ho) town of Middletown, Mich, (home of the “Sow Chemical Company”), John tries to get Reg to support his campaign and they vie for the love of Tit-tabawassee Jane.

The cast is what makes this show’s inaugural production an event. John, Reg and Jane will be played, respectively, by nuclear mime O.J. Anderson, and Dick Siegel and Tracy Lee Komarmy of Tracy Lee and the Leonards.

Although the cast is stellar, with stage experience galore, it does seem an unlikely creative marriage. Komarmy is a theater major, but both Siegel and Anderson are used to calling their own shots and staging their own shows; Director David Hunsberger normally professes an aversion to musicals, preferring instead intense dramas like David Mamet’s “American Buffalo.”

But in a recent interview, Hunsberger asserted that assembling the cast and crew for a show that he refers to as “just a one-set thing in a bar” isn’t that strange.

“It’s just West Side Ann Arbor people - all these people know each other, they like each other, and that’s their reason for doing it,” he said.

Given the heavy schedules of his starring cast, how did he get them together?

Anderson had already committed himself to doing a show with Hunsberger (he almost wound up in “Buffalo") and Komarmy, through her involvement in the most recent production of “North Country Opera,” had heard some of the songs Stielstra had composed for “Jane" and was interested in doing anything in the show.

“Dick Siegel basically came in with Tracy, naturally enough, and after he’d been in auditions for a half an hour, he said, ‘Do you think it would be possible that I could read for a part?'

“I think he was just thinking of some little bit part, but he winds up with the lead.

“One of the biggest things about it,” continued Hunsberger, “is it’s a play, in a way, for fun. Obviously, Owen, Tracy Lee and Dick can make a helluva lot more .money on a Friday and Saturday night doing what they normally do than they can doing this.”

The combination of Stielstra and the starring cast isn’t where the impressive credits stop. The rest of the cast includes local lights John Smenge and Chris McMullen; the lighting director is Robert Beaupre (who recently revived his one-man Hemingway show at the Ark); and the musical director and leader of the four-piece band which will supply the music is Kelly Schmidt -“one of the most underappreciated artists in this town,” says Hunsberger.

Put them all together, and you have a West Side Story of a very different sort, one with good music, a solid plot with social significance and a cast that isn’t just one most directors would kill for, but a group of friends who want to work together.

This is likely to be one of those Performance Network productions where you just might want to consider buying your tickets in advance, because Stielstra shows have a habit of selling out - and with all this going for it, “Tittawabassee Jane” might be the hottest ticket yet.

The Performance Network, 408 W. Washington St., will present Jay Stielstra's 'Tittabawassee Jane' Thursday through Saturday (also, Feb.: 25-27), with the overture beginning at 8 p.m. General admission seats are $7, available in advance at the Old Town Tavern and Herb David's Guitar Studio, or at the door. For more information, call 663-0681.