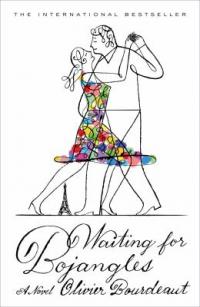 Winner of the Prix du Roman des etudiants France Culture/Telerama; the Prix Roman France Televisions; and the Prix Emmanuel-Robles, Waiting for Bojangles, Olivier Bourdeaut’s debut is “at once delightfully whimsical and hugely touching.” (Library Journal) It is told from the perspective of a young boy who shares a grand Paris apartment with his eccentric parents and an exotic pet crane named Mademoiselle Superfluous.

George and Louise (though she was never called by the same name twice) met and married on a whim. She was beautiful and quite mad, and he was indulgent and smitten. He sold his businesses  (quite profitably) so they could stay home, have wild parties and dance all night to Nina Simone’s “Mister Bojangles.” When the teachers did not approve of the boy’s tardiness and unexplained absence, they chose to keep him home.

As Louise descended deeper into mental illness, father and son went to great lengths to protect and humor her - by staging a kidnapping, and fleeing Paris for their country house in Spain. “Bourdeaut’s debut is both a charming tale that revels in colorful detail and language and a heart-rending depiction of the brutal march of mental illness. Its part-rhyming structure almost always feels organic (hats-off to translator Regan Kramer) and lends the narrative a sense of flow and momentum. But it’s the irresistible, childlike sense of delight—even in the face of unimaginable sorrow—that renders the novel a genuinely enjoyable reading experience and one that sparks complex and conflicting emotions.” (Kirkus Reviews)

Suggested readalikes: Love in Lowercase by Francesc Miralles, and The Rosie Project by Graeme Simsion.