A Way With Cars 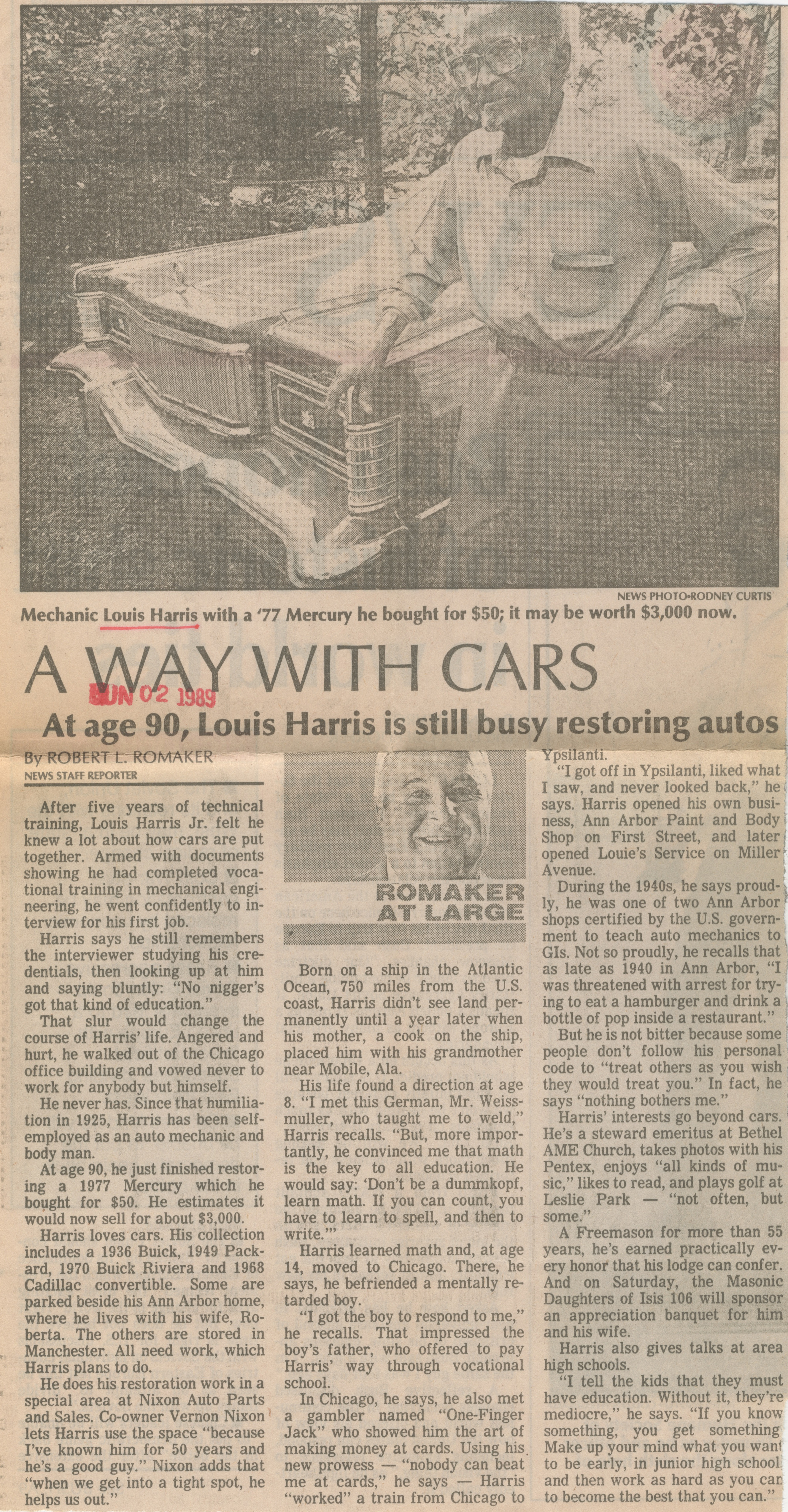 By ROBERT L. ROMAKER NEWS STAFF REPORTER
After five years of technical training, Louis Harris Jr. felt he knew a lot about how cars are put together. Armed with documents showing he had completed vocational training in mechanical engineering, he went confidently to interview for his first job.
Harris says he still remembers the interviewer studying his credentials, then looking up at him and saying bluntly: "No nigger's got that kind of education."
That slur would change the course of Harris' life. Angered and hurt, he walked out of the Chicago office building and vowed never to work for anybody but himself.
He never has. Since that humiliation in 1925, Harris has been self employed as an auto mechanic and body man.
At age 90, he just finished restoring a 1977 Mercury which he bought for $50. He estimates it would now sell for about $3,000.
Harris loves cars. His collection includes a 1936 Buick, 1949 Packard, 1970 Buick Riviera and 1968 Cadillac convertible. Some are parked beside his Ann Arbor home, where he lives with his wife, Roberta. The others are stored in Manchester. All need work, which Harris plans to do.
He does his restoration work in a special area at Nixon Auto Parts and Sales. Co-owner Vernon Nixon lets Harris use the space "because I've known him for 50 years and he's a good guy." Nixon adds that "when we get into a tight spot, he helps us out.

Born on a ship in the Atlantic Oceari, 750 miles from the U.S. coast, Harris didn't see land permanently until a year later when his mother, a cook on the ship, placed him with his grandmother near Mobile, Ala.
His life found a direction at age 8. "I met this German, Mr. Weissmuller, who taught me to weld," Harris recalls. "But, more importantly, he convinced me that math is the key to all education. He would say: 'Don't be a dummkopf, learn math. If you can count, you have to learn to spell, and then to write."
Harris learned math and, at age 14, moved to Chicago. There, he says, he befriended a mentally retarded boy.
"I got the boy to respond to me,” he recalls. That impressed the boy's father, who offered to pay Harris' way through vocational school.
In Chicago, he says, he also met a gambler named "One-Finger Jack" who showed him the art of making money at cards. Using his new prowess - "nobody can beat me at cards," he says - Harris "worked" a train from Chicago to Ypsilanti.
"I got off in Ypsilanti, liked what I saw, and never looked back," he says. Harris opened his own business, Ann Arbor Paint and Body Shop on First Street, and later opened Louie's Service on Miller
Avenue.
During the 1940s, he says proudly, he was one of two Ann Arbor shops certified by the U.S. government to teach auto mechanics to GIs. Not so proudly, he recalls that as late as 1940 in Ann Arbor, "I was threatened with arrest for trying to eat a hamburger and drink a bottle of pop inside a restaurant."
But he is not bitter because some people don't follow his personal code to "treat others as you wish they would treat you." In fact, he says "nothing bothers me."
Harris' interests go beyond cars. He's a steward emeritus at Bethel AME Church, takes photos with his Pentex, enjoys "all kinds of music," likes to read, and plays golf at Leslie Park - "not often, but some."
A Freemason for more than 55 years, he's earned practically every honor that his lodge can confer. And on Saturday, the Masonic Daughters of Isis 106 will sponsor an appreciation banquet for him and his wife.
Harris also gives talks at area high schools.
"I tell the kids that they must have education. Without it, they're mediocre," he says. "If you know something, you get something Make up your mind what you want to be early, in junior high school. and then work as hard as you can to become the best that you can."