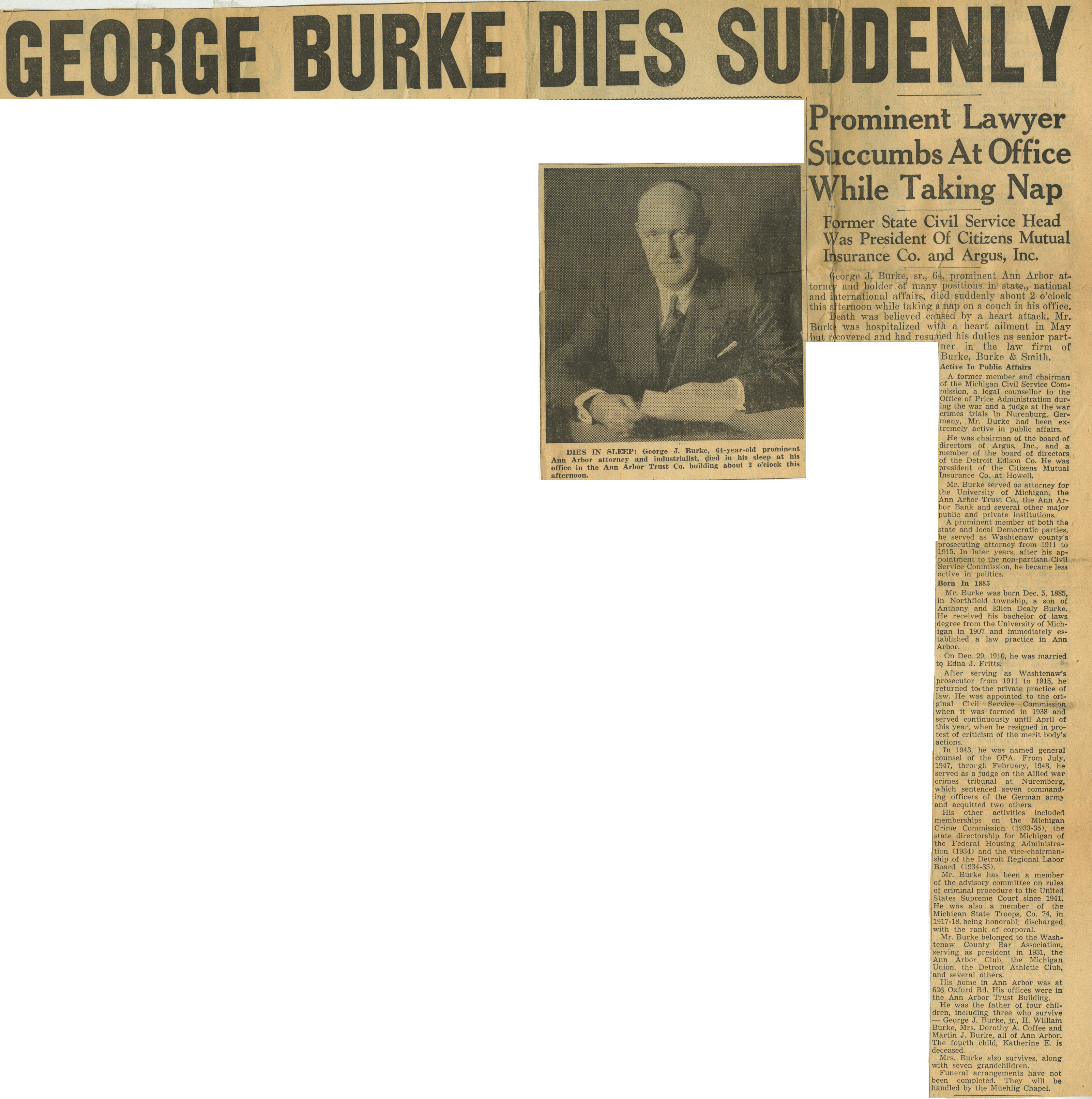 Prominent Lawyer Succumbs At Office While Taking Nap Former State Civil Service Head Was President Of Citizens Mutual Insurance Co. and Argus, Inc. George J. Burke, sr., 64, prominent Ann Arbor attorney and holder of many positions in state,, national and international affairs, died suddenly about 2 o'clock this afternoon while taking a nap on a couch in his off Death was believed caused by a heart attack. Mr. Burke was hospitalized with a heart ailment in May but recovered and had resumed his duties as senior part ner in the law firm of Burke, Burke & Smith. Active In Public Affairs A former member and chairman of the Michigan Civil Service Commission, a legal counsellor to the Office of Price Administration during the war and a judge at the war crimes trials in Nurenburg, Germany, Mr. Burke had been extremely active in public affairs. He was chairman of the board of directors of Argus, Inc., and a member of the board of directors of the Detroit Edison Co. He was president of the Citizens Mutual Insurance Co. at Howell. Mr. Burke served as attorney for the University of Michigan, the Ann Arbor Trust Co., the Ann Arbor Bank and several other major public and private institutions. A prominent member of both the state and local Democratic parties, he served as Washtenaw county's prosecuting attorney from 1911 to 1915. In later years, after his appointment to the non-partisan Civil Service Commission, he became less active in politics. Born In 1885 Mr. Burke was born Dec. 5, 1885, in Northfield township, a son of Anthony and Ellen Dealy Burke. He received his bachelor of laws degree from the University of Michigan in 1907 and immediately established a law practice in Ann Arbor. On Dec. 29, 1910, he was married to Edna J. Fritts. After serving as Washtenaw's prosecutor from 1911 to 1915, he returned to, the private practice of law. He was appointed to the original Civil Service Commission when it was formed in 1938 and served continuously until April of this year, when he resigned in protest of criticism of the merit body's actions. In 1943, he was named general counsel of the OPA. From July, 1947, through February, 1948, he served as a judge on the Allied war crimes tribunal at Nuremberg, which sentenced seven command. ing officers of the German army and acquitted two others. His other activities included memberships on the Michigan Crime Commission (1933-35), the state directorship for Michigan of the Federal Housing Administration (1934) and the vice-chairmanship of the Detroit Regional Labor Board (1934-35). Mr. Burke has been a member of the advisory committee on rules of criminal procedure to the United States Supreme Court since 1941. He was also a member of the Michigan State Troops, Co. 74, in 1917-18, being honorable. discharged with the rank of corporal. Mr. Burke belonged to the Washtenaw County Bar Association, serving as president in 1931, the Ann Arbor Club, the Michigan Union, the Detroit Athletic Club, and several others. His home in Ann Arbor was at 626 Oxford Rd. His offices were in the Ann Arbor Trust Building. He was the father of four children, including three who survive - George J. Burke, jr., H. William Burke, Mrs. Dorothy A. Coffee and Martin J. Burke, all of Ann Arbor. The fourth child, Katherine E. is deceased. Mrs. Burke also survives, along with seven grandchildren. Funeral arrangements have not been completed. They will be handled by the Muehlig Chapel.