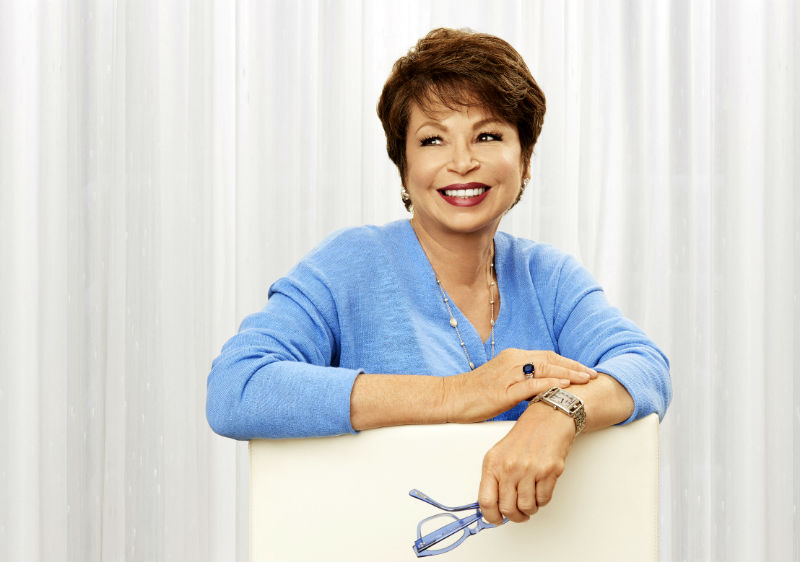 If I had been paying as much attention to national politics in 2009 as I do now, maybe I would have been more familiar with Valerie Jarrett, senior advisor to President Barack Obama. But her visit to the Michigan Theater on Monday, April 22, gave me the chance to learn more about her story.

I am so glad that I took that chance.

“You never know what can happen with a Michigan Law degree.” --Broderick Johnson

As part of her book took for Finding My Voice: My Journey to the West Wing and the Path Forward, Jarrett was in conversation with Broderick Johnson, an adjunct professor at the University of Michigan Law School. Maybe Johnson and Jarrett appeared to be so comfortable on stage because of their work together as advisors in the Obama administration. Maybe it was because their friendship was palpable. Maybe it was because they’re both University of Michigan Law School alumni and this felt like a homecoming of sorts. In any case, it was a pleasure to behold.

Broderick jumped right in asking Jarrett why she wrote this book after being out of the White House for only two years.  The answer turned out to be a family story. Her daughter, CNN reporter Laura Jarrett, asked Valerie what she would tell a 30-year-old version of herself.  After the interview, her daughter suggested Valerie should write a book.

“I discovered the adventure is in the zigzag.” --Valerie Jarrett

Valerie Jarrett is a planner. In fact, as a young person, she diligently devised and worked toward a 10-year plan that involved finishing law school, going to work for a good law firm, and having a child before age 30. She reached her goals, but found that she felt almost as if she were living someone else’s life, that she wasn’t listening to the “small voice inside.” She didn’t trust it.

She left the prestigious law firm where she worked in order to work for Mayor Harold Washington in Chicago, changing the trajectory of her career.

“My parents took me over the color line.” --Valerie Jarrett

Meandering paths are not new to the Jarrett family. Due to social conditions in the United States, Jarrett spent the first several years of her life in Iran. American racism and segregation had meant that her father, a doctor, was unable to find work that matched his skill and education in the at home. This is how he found his way to accept a position as the chair of pathology at the Nemazee Hospital in Shiraz, Iran. This is how Jarrett spent the first five years of her life abroad.

Her time there and subsequent reflection taught her important lessons: a strong appreciation for the United States of America, that she could play with anyone, and that the U.S. is a great country, but it is not the only country.

Broderick Johnson asked Jarrett whether her parents had ever discussed with her the difficulties of returning to Jim Crow America from a place where, for the first time, her father was seen not as a black doctor, but as an American doctor.

Jarrett replied that her parents were realists who understood that change doesn’t happen overnight and who knew that they needed to prepare their child to work hard for what she wanted, and not to quit. In her hardest moments, though, Jarrett thought of those who came before her, like her great grandfather, Robert Robinson Taylor, the first African-American to attend MIT. Thinking about how the challenges and fears that he faced must have felt to him helped inspire her to push on.

New motherhood was one of those trying eras in her life. In addition to the responsibility of parenthood, she also felt pressured to have “things together. ”As a result, she refused to ask for help as she strived to be a “badass superwoman.” During this time, a family member said to her, “You’re not actually that nice. Why are you pretending?”

She has since learned the value of being open, sharing what one’s going through.

In recounting these times, Jarrett made the point that as someone with health insurance, excellent childcare, and parents who were helpful and supportive,  she had many factors in her favor. Yet, she said, “I had everything going for me and I still felt like I was hanging on by my fingertips.” This experience also influenced her career choices both illustrating how valuable advocacy is, and how beneficial making life easier for families can be.

Johnson asked Jarrett about the role of mentorship in her career, and what she had learned from her mentor, Lucille Dobbins.

Jarrett told the audience that her Dobbins exposed her to new areas such as policy conversations that gave her an understanding as to how certain policies come to be. She was included in meetings with the mayor. She also thought about what Jarrett needed to learn, pushing her to ask for a promotion, of that last point Jarrett said, “She thought I needed to learn how to ask for it.”

“I met Michelle Robinson in 1991 when she came into my office for a job interview.” --Valerie Jarrett

Jarrett also talked to the audience about being a mentor. She began that story talking about offering Michelle Obama a job that Obama wasn’t sure about accepting. Jarrett was invited to have dinner with the then-engaged couple and says, “Our lives have been intertwined ever since.”

“I thought that maybe one day he could be mayor of Chicago.” --Valerie Jarrett on Barack Obama

Jarrett’s parents never believed that Barack Obama could be President of the United States. After the 2008 election, her mother asked her how she knew that he could become president. She told her mother that her parents taught her that through hard work that anything was possible. Her mother replied told her that she had never actually believed that. “What I realized is that they had raised me aspirationally,” said Jarrett.

When Broderick Johnson asked Jarrett about her “pinch me” moment in the White House, Jarrett took us to June 26, 2015. The funeral for Reverend Clementa Pinckney, a member of the South Carolina Senate who was murdered in the Charleston church shooting was to take place that day. As the time to travel to South Carolina approached, the Supreme Court ruled 5-4 that the Constitution guarantees marriage equality. Jarrett attempted to communicate the news to President Obama who turned out to be hard to track down at the time. He had been working on Reverend Pinckney’s eulogy. This was when Obama famously sang Amazing Grace, in the black style, a moving moment that you heard about whether or not you were following the events in South Carolina.

Following the funeral was a trip back to the Rose Garden where President Obama gave remarks on the Supreme Court’s ruling. The Colonnade was packed, many young people wanting to be a part of this moment. That night, the White House was illuminated in rainbow colors. Just beforehand Jarrett tweeted, “Join us for sunset to see the @WhiteHouse reflect what we always knew in our hearts. #LoveWins.” At the Michigan Theater, she pointed out that this moment, a photograph of which became the most requested of the Obama presidency, would not have happened if a young person hadn’t used her voice to express the idea.

Turns out that Jarrett’s pinch-me moment was more of a pinch-me day.

At the end of the night, Jarrett fielded a question about hope, how she remains hopeful. She talked about everyday people doing extraordinary things from the activism of the Parkland shooting survivors to those who protested at the O’Hare airport in response to the Muslim ban.

“You are why I am an optimist," Jarrett said. "Keep talking … you are why.”