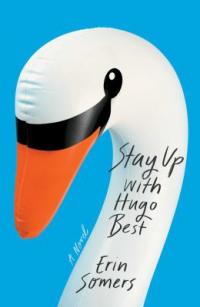 Stay Up with Hugo Best *  by Erin Somers

29 year-old June Bloom, an aspiring comedy writer, has been working as a writers' assistant for a late-night talk show, Stay Up with Hugo Best when the show was cancelled for falling ratings. Unemployed with little prospect, June left the farewell party and made her way to an open-mic night at a dive bar where she unexpectedly met up with Hugo, and impulsively accepted the sixtysomething-womanizer’s invitation to spend the long Memorial Day weekend at his Greenwich mansion. Though the exact terms of the visit were never spelled out, June was realistic and clear-eyed enough to guess. The weekend started with a series of misunderstandings and misadventures and the presence of Hugo’s teenage son, Spencer, home from prep school further complicated matters.

“Somers sidesteps the predictable path the reader might expect this weekend to take, instead meandering into subtle, surprising territory… a winning debut.” (Publishers Weekly) 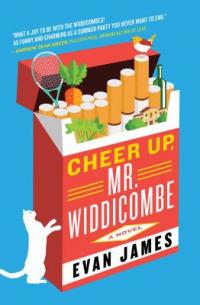 Named one of 2019's most anticipated reads by LitHub and Entertainment Weekly, Cheer Up, Mr. Widdicombe by Evan James is a hilarious and sophisticated comedy of manners about an eccentric family during one frenzied summer in the Pacific Northwest.

Carol Widdicombe is convinced moving into Willowbrook Manor, their new Bainbridge Island home would bring her husband Frank out of a deep depression. She is sure it won’t hurt to turn their elegant summer home into a showplace, perhaps even as a feature in a décor magazine. And so begins a whirlwind summer of multiple social dramas involving the family and a few chosen friends.

Their son Christopher, is nursing a broken heart after a year abroad in Italy. Michelle Briggs, Carol's personal assistant is enamored with Bradford Dearborne, a blue-blooded screenwriter and Frank’s tennis partner. Their gardener Marvelous Matthews, a recovering alcoholic, finds himself enchanted with Gracie Sloane, a self-help guru.

“When this alternately bumbling and clever cast of characters comes together, Willowbrook transforms into a circus of uncovered secrets, preposterous misunderstandings, and irrepressible passions.”  For fans of Maria Semple's Where'd You Go, Bernadette?; Andrew Sean Greer's Less; and Jess Walter's Beautiful Ruins.