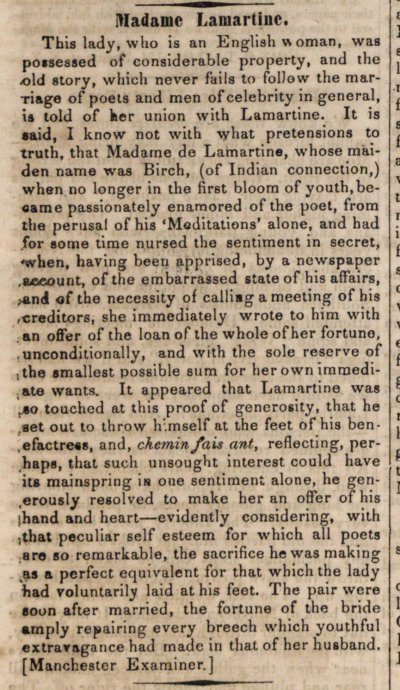 Tbis lady, who is an English w ornan, was poisessed of considerable property, and the oÃ­d story, which never fails to foDow the raarTÃage of poets and men ofcelebrity in general, is told of her uniÃ³n with Lamartine. It is said, I know not with what pretensions to truth, that Madame de Lamartine, whose maiden name was Birch, (of Indian connection,) when no longer in the first bloom ofyouth.beeame passionately enamored of the poet, from the perusal of his 'Meditations' alone, and had for eome time nursed the sentiment in secret, when, having been apprised, by a newspaper .tu&eount, of the ernbarrassed state of his affairs, nd of the necessity of calliag a meeting of his ,creditors, she immediately wrote to him with an ofier of the loan of the whole of her fortune, ,unconditionally, and with the sole reserve of ,the mallest possible sum for herown immediate wants. It appeared that Lamartine was .o touchcd at this proof of generosity, that he set out to throw hlmself at the feet of his ben. efactreB, and, cheminfais ant, reflecting, perhaps, that sucli unsought interest could have its mainspnng in one sentiment alone, he gen.erously resolved to make her an offer of his hand and heart - evidently considering, with ,that peculiar self esteem for which all poets aro so remarkable, the sacrifice he was making as a perfect equivalent for that which the lady Ã­iad voluntarily laid at his feet. The pair were eoon after married, the fortune of the bride mply repairing every breech which youthful extraTagance had made in that of her husband.