Appointments By The President 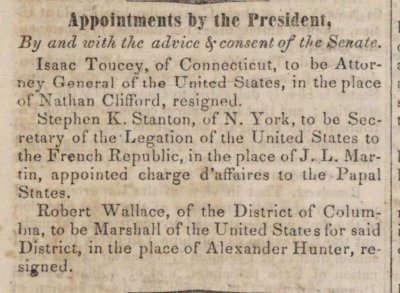 Isaac Toucey, of Connocticut, to be AttorItcy Oenerol of the United ÃiatOS, in the place of Nalhan ClifFord, resigned. Stephen K. Stanton, of N. York, to bc Secretary of the Legation of the United Slates to the French Republic, n the place of J. L. Martin, appointed charge d'affaires to the Papal States. Robert Wallace, of the District of ColumIni, to be Marshall of tlie United States For said District, in the place of Alexander Hunler, resigned.