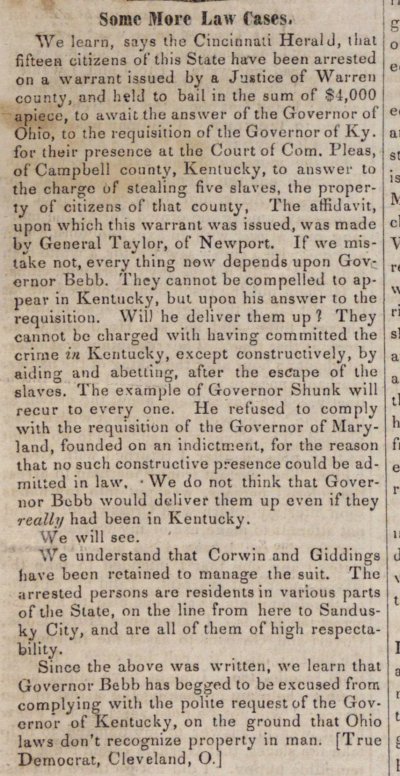 We learn, says the Cincinnaii Heraid, lliat j fifteen citizens ot'tliis State have been arrested on a warrant issued by a Justiee of Warren county, and helJ to bail in tlie sum of $4,000 apiece, to await the answer of the Governor of Oliio, to the Ã¯equisition of the Governor of Ky. foi' their presence at the Courtof Cotn. Pleas, of Campbell county, Kenlucky, to answer to the charge of stealing five slaves, the property of citizens of that county, The arfidavit, upon whicli this warrant was issued, was made by General Taylor, of' Newport. If we mistake not, every thing now depends upon Governor Bebb. They cannot be compelled to appeav in Kenlucky, but upon his answer to the requisitiou. Wil) he deliver them up? They cannot be charged with having committed the crime in Kentucky, except constructively, by a'uling and abetting, after the escape of the slavÃ¼s. The example of Governor Shunk will recur to every one. He reiuscd to comply with the requisition of the Governor of Maryland, founded on an ifidictment, for the reason that no such constructivo presence could be admitted in law, â  We do not think that Governor Bobb would dtliver them up even if they really had been in Kentucky. We will sec. We understand that Corwin and Giddings have been rctained to manage the suit. The arrested persons are residents in various parts of the State, on the line from here to Sandusky City, and are all of them of high respectability. Since the above was written, we learn that Governor Bebb has begged to be excused from complying with the polite request of the Governor of Kentucky, on the ground that Ohio