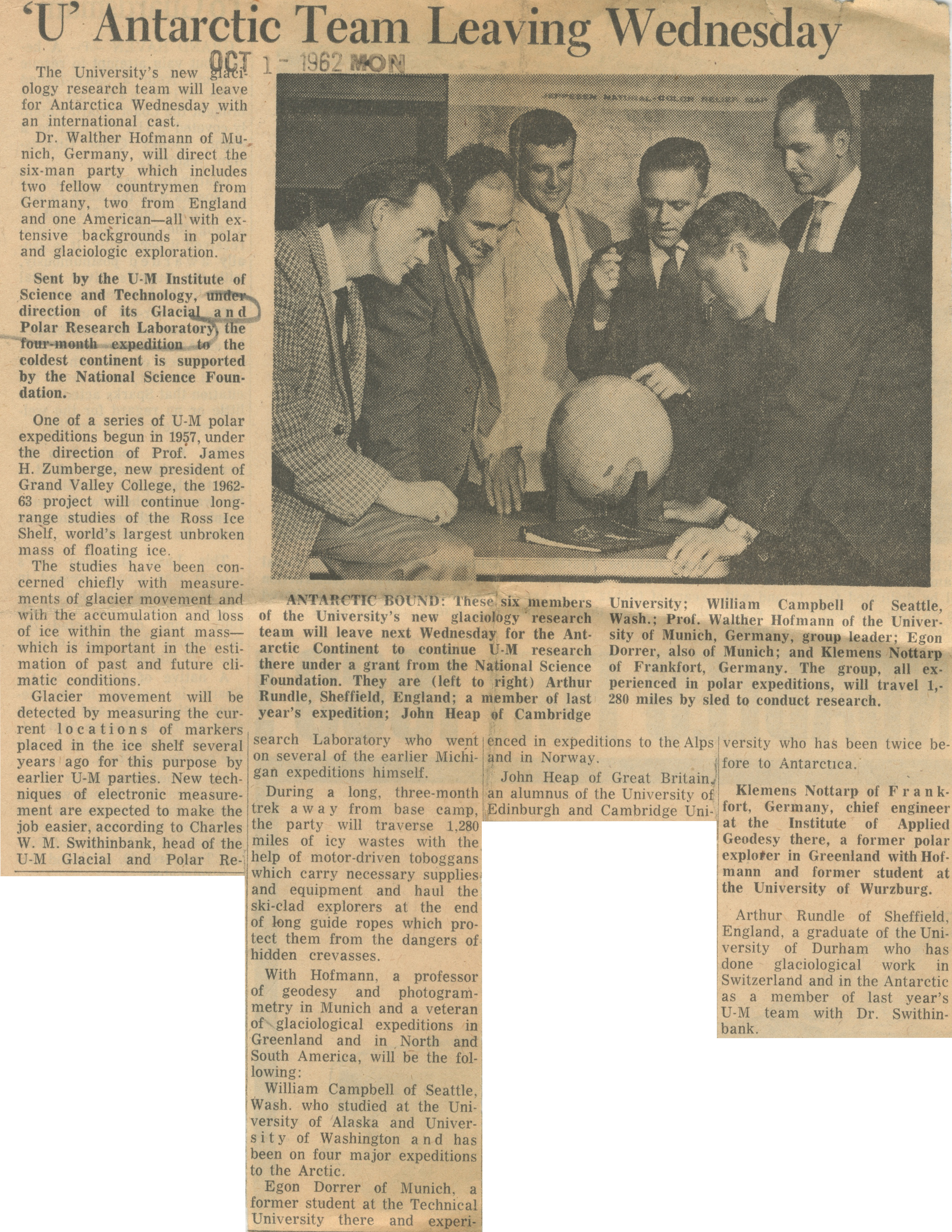 The University's new glaciology research team will leave for Antarctica Wednesday with an international cast.

Dr. Walther Hofmann of Munich, Germany, will direct the six-man party which includes two fellow countrymen from Germany, two from England and one American—all with extensive backgrounds in polar and glaciologic exploration.

﻿Sent by the U-M Institute of Science and Technology, under direction of its Glacial and Polar Research Laboratory, the four-month expedition to the coldest continent is supported by the National Science Foundation.

One of a series of U-M polar expeditions begun in 1957, under the direction of Prof. James H. Zumberge, new president of Grand Valley College, the 1962-63 project will continue long-range studies of the Ross Ice Shelf, world’s largest unbroken mass of floating ice.

The studies have been concerned chiefly with measurements of glacier movement and with the accumulation and loss of ice within the giant mass— which is important in the estimation of past and future climatic conditions.

Glacier movement will be detected by measuring the current locations of markers placed in the ice shelf several years ago for this purpose by earlier U-M parties. New techniques of electronic measurement are expected to make the job easier, according to Charles W. M. Swithinbank, head of the U-M Glacial and Polar Research Laboratory who went on several of the earlier Michigan expeditions himself.

During a long, three-month trek away from base camp, the party will traverse 1,280 miles of icy wastes with the help of motor-driven toboggans which carry necessary supplies and equipment and haul the ski-clad explorers at the end of long guide ropes which protect them from the dangers of hidden crevasses.

With Hofmann, a professor of geodesy and photogrammetry in Munich and a veteran of glaciological expeditions in Greenland and in North and South America, will be the following:

William Campbell of Seattle, Wash. who studied at the University of Alaska and University of Washington and has been on four major expeditions to the Arctic.

Egon Dorrer of Munich, a former student at the Technical University there and experienced in expeditions to the Alps and in Norway.

John Heap of Great Britain, an alumnus of the University of Edinburgh and Cambridge University who has been twice before to Antarctica.

Klemens Nottarp of Frankfort, Germany, chief engineer at the Institute of Applied Geodesy there, a former polar explorer in Greenland with Hofmann and former student at the University of Wurzburg.

Arthur Rundle of Sheffield, England, a graduate of the University of Durham who has done glaciological work in Switzerland and in the Antarctic as a member of last year’s U-M team with Dr. Swithinbank.

[image]:  ANTARCTIC BOUND:  These six members of the University's new glaciology research team will leave next Wednesday for the Antarctic Continent to continue U-M research there under a grant from the National Science Foundation. They are (left to right) Arthur Rundle, Sheffield, England; a member of last year’s expedition; John Heap of Cambridge University; William Campbell of Seattle, Wash.; Prof. Walther Hofmann of the University of Munich, Germany, group leader; Egon Dorrer, also of Munich; and Klemens Nottarp of Frankfort, Germany. The group, all experienced in polar expeditions, will travel 1,280 miles by sled to conduct research.