To The Liberty Party 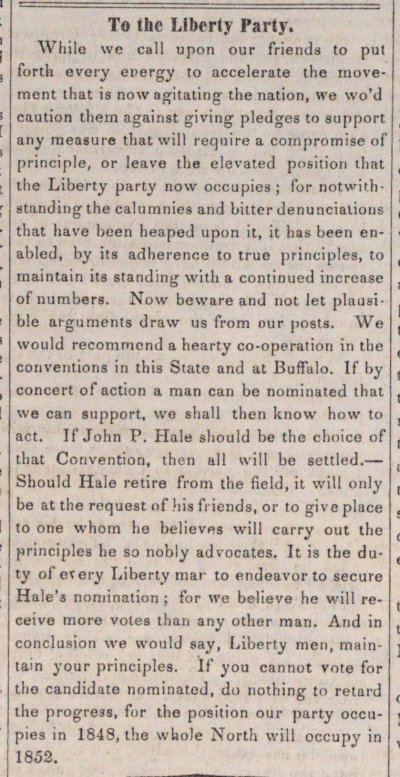 Wliile wc cali upon our friends to put forth every energy to accelerate the movement that is now agitating the nation, we wo'd caution them against giving pledges to support any measure that will require a compromiso of principie, or Ieave the elevated position that the Liberty party now occupies; for notwirhstanding the calumnies and bitter denuncialions that have been heaped upon it, it has been enabled, by its adherence to true principies, to maintain its standing with a continued increase of numbers. Now beware and not let plausible arguments draw us from our posts. We would recommcnd a hearty co-operation in the conventions in this State and at Buffalo. If by concert of action a man can be nominated that we can support, wo shall then know how to act. If John P. Hale should be the choice of that Convention, then all will be settled. - Should Hale retire from the field, it will only be at the request of }iis friends, or togive place to one whom he believes will carry out the principies he so nobly advocates. It is the duty of erery Liberty mar to endeavor to secure Hale's nomination ; for we believe he will receive more votes than any other man. And in conclusiÃ³n we would say, Liberty men, maintain your principies. If you cannot vote for tho candidate nominated, do nothing to retard the progress, for the position our party occupies in 1848, the vvbole North will occupy in 1852.