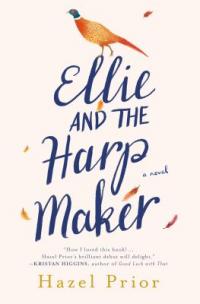 For fans of The Rosie Project and The Kiss Quotient comes Ellie and the Harpmaker * * , Hazel Prior’s charming debut, set in England’s West Country.

Ellie Jacobs happened upon the Harp Barn on one of her walks on the moors, and met the exceedingly handsome harpmaker Dan Hollis. Happy in his solitude, making exquisite Celtic harps from local materials, Dan impulsively gifted Ellie, whom he referred to as the Exmoor housewife with a cherrywood harp (to match her cherry-colored socks) after learning that playing the harp was on Ellie’s bucket list.

When Ellie’s domineering husband Clive insisted that Ellie return the harp, Dan offered to keep it at the barn, and introduced Ellie to Rhoda, a concert harpist as her teacher. As Ellie made daily visits to her harp in secret, she found herself increasingly drawn to Dan - with all his “peculiarities and eccentricities, his self-sufficiency, his otherworldliness”. When the insanely jealous Clive discovered Ellie’s betrayal, it looked like their precariously balanced relationship might not survive.

Told in the alternating voices of its two protagonists,  “Prior's debut probes the inner workings of two very different minds. Empathetic to its core, it's a delightfully heart-warming glimpse inside a lushly imagined world. Tender, free-spirited, and guaranteed to tug at readers' heartstrings.” (Booklist)