Restaurant stays 'all in family' for 50 years 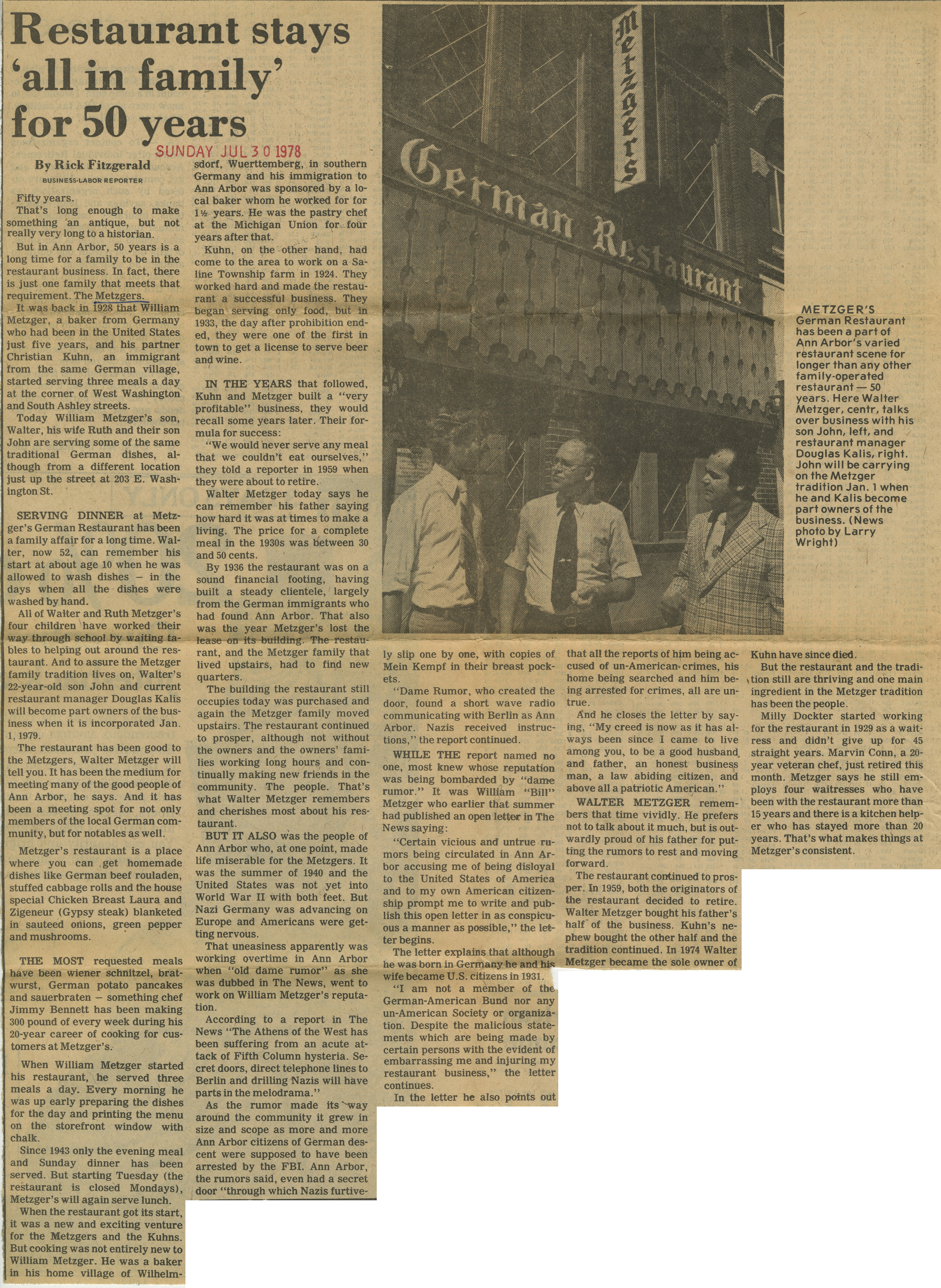 ﻿Restaurant stays ‘all in family’ for 50 years

That's long enough to make something an antique, but not really very long to a historian.

But in Ann Arbor, 50 years is a long time for a family to be in the restaurant business. In fact, there is just one family that meets that requirement. The Metzgers.

It was back in 1928 that William Metzger, a baker from Germany who had been in the United States just five years, and his partner Christian Kuhn, an immigrant from the same German village, started serving three meals a day at the corner of West Washington and South Ashley streets.

Today William Metzger's son, Walter, his wife Ruth and their son John are serving some of the same traditional German dishes, although from a different location just up the street at 203 E. Washington St.

SERVING DINNER at Metzger’s German Restaurant has been a family affair for a long time. Walter, now 52, can remember his start at about age 10 when he was allowed to wash dishes - in the days when all the dishes were washed by hand.

All of Walter and Ruth Metzger’s four children have worked their way through school by waiting tables to helping out around the restaurant. And to assure the Metzger family tradition lives on, Walter’s 22-year-old son John and current restaurant manager Douglas Kalis will become part owners of the business when it is incorporated Jan. 1,1979.

The restaurant has been good to the Metzgers, Walter Metzger will tell you. It has been the medium for meeting many of the good people of Ann Arbor, he says. And it has been a meeting spot for not only members of the local German community, but for notables as well.

Metzger’s restaurant is a place where you can .get homemade dishes like German beef rouladen, stuffed cabbage rolls and the house special Chicken Breast Laura and Zigeneur (Gypsy steak) blanketed in sauteed onions, green pepper and mushrooms.

THE MOST requested meals have been wiener schnitzel, bratwurst, German potato pancakes and sauerbraten - something chef Jimmy Bennett has been making 300 pound of every week during his 20-year career of cooking for customers at Metzger’s.

When William Metzger started his restaurant, he served three meals a day. Every morning he was up early preparing the dishes for the day and printing the menu on the storefront window with chalk.

Since 1943 only the evening meal and Sunday dinner has been served. But starting Tuesday (the restaurant is closed Mondays), Metzger’s will again serve lunch.

When the restaurant got its start, it was a new and exciting venture for the Metzgers and the Kuhns. But cooking was not entirely new to William Metzger. He was a baker in his home village of Wilhelmsdorf, Wuerttemberg, in southern Germany and his immigration to Ann Arbor was sponsored by a local baker whom he worked for for 1 1/2 years. He was the pastry chef at the Michigan Union for four years after that.

Kuhn, on the other hand, had come to the area to work on a Saline Township farm in 1924. They worked hard and made the restaurant a successful business. They began serving only food, but in 1933, the day after prohibition ended, they were one of the first in town to get a license to serve beer and wine.

IN THE YEARS that followed, Kuhn and Metzger built a “very profitable” business, they would recall some years later. Their formula for success:

“We would never serve any meal that we couldn’t eat ourselves,” they told a reporter in 1959 when they were about to retire.

Walter Metzger today says he can remember his father saying how hard it was at times to make a living. The price for a complete meal in the 1930s was between 30 and 50 cents.

By 1936 the restaurant was on a sound financial footing, having built a steady clientele, largely from the German immigrants who had found Ann Arbor. That also was the year Metzger’s lost the lease on its building. The restaurant, and the Metzger family that lived upstairs, had to find new quarters.

The building the restaurant still occupies today was purchased and again the Metzger family moved upstairs. The restaurant continued to prosper, although not without the owners and the owners’ families working long hours and continually making new friends in the community. The people. That’s what Walter Metzger remembers and cherishes most about his restaurant.

BUT IT ALSO was the people of Ann Arbor who, at one point, made life miserable for the Metzgers. It was the summer of 1940 and the United States was not yet into World War II with both feet. But Nazi Germany was advancing on Europe and Americans were getting nervous.

That uneasiness apparently was working overtime in Ann Arbor when "old dame rumor” as she was dubbed in The News, went to work on William Metzger’s reputation.

According to a report in The News “The Athens of the West has been suffering from an acute attack of Fifth Column hysteria. Secret doors, direct telephone lines to Berlin and drilling Nazis will have parts in the melodrama.”

As the rumor made its way around the community it grew in size and scope as more and more Ann Arbor citizens of German descent were supposed to have been arrested by the FBI. Ann Arbor, the rumors said, even had a secret door “through which Nazis furtively slip one by one, with copies of Mein Kempf in their breast pockets.

WHILE THE report named no one, most knew whose reputation was being bombarded by “dame rumor.” It was William “Bill” Metzger who earlier that summer had published an open letter in The News saying:

“Certain vicious and untrue rumors being circulated in Ann Arbor accusing me of being disloyal to the United States of America and to my own American citizenship prompt me to write and publish this open letter in as conspicuous a manner as possible," the letter begins.

The letter explains that although he was born in Germany he and his wife became U.S. citizens in 1931.

“I am not a member of the German-American Bund nor any un-American Society or organization. Despite the malicious statements which are being made by certain persons with the evident of embarrassing me and injuring my restaurant business,” the letter continues.

In the letter he also points out that all the reports of him being accused of un-American crimes, his home being searched and him being arrested for crimes, all are untrue.

And he closes the letter by saying, “My creed is now as it has always been since I came to live among you, to be a good husband and father, an honest business man, a law abiding citizen, and above all a patriotic American.”

WALTER METZGER remembers that time vividly. He prefers not to talk about it much, but is outwardly proud of his father for putting the rumors to rest and moving forward.

The restaurant continued to prosper. In 1959, both the originators of the restaurant decided to retire. Walter Metzger bought his father’s half of the business. Kuhn's nephew bought the other half and the tradition continued. In 1974 Walter became the sole owner of Kuhn have since died.

But the restaurant and the tradition still are thriving and one main ingredient in the Metzger tradition has been the people.

Milly Dockter started working for the restaurant in 1929 as a waitress and didn’t give up for 45 straight years. Marvin Conn, a 20-year veteran chef, just retired this month. Metzger says he still employs four waitresses who have been with the restaurant more than 15 years and there is a kitchen helper who has stayed more than 20 years. That’s what makes things at Metzger’s consistent.

METZGER’S German Restaurant has been a part of Ann Arbor's varied restaurant scene for longer than any other family-operated restaurant —50 years. Here Walter Metzger, centr, talks over business with his son John, left, and restaurant manager Douglas Kalis, right. John will be carrying on the Metzger tradition Jan. 1 when he and Kalis become part owners of the business. (News photo by Larry Wright)