Long-running folk duo Annie and Rod Capps coalesced with a great band for its new album, "When They Fall" 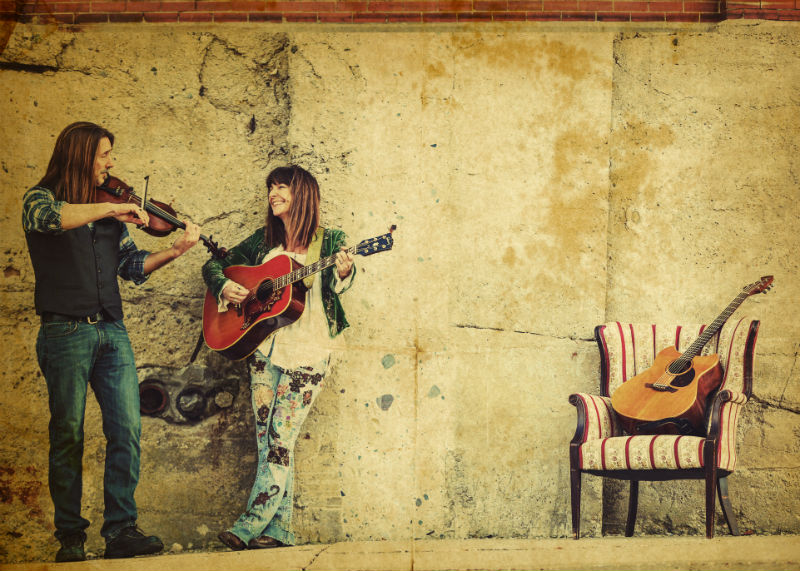 For fans of heartfelt and well-played acoustic roots music, a new album from Ann Arbor duo Annie and Rod Capps is always a treat. But with their latest, When They Fall, something’s a little different.

The songwriting, always smart and heartfelt, has become richer. The musicianship -- fleshed out on the record by Jason Dennie (mandolin and mandola), Dan Ozzie Andrews (bass), and Michael Shimmin (drums and percussion) -- is also better than ever. And the duo is making its most concentrated publicity push. It all feels like something of a step forward for a project that was already a vital and important part of the local music scene.

When They Fall goes from one highlight to the next, but among the most memorable tracks are “Poor Old Me,” showing a great sense of humor with the band sounding particularly lively; the touching “Happy New Year” and “Walking Through” (the latter featuring memorable lines like “I’m praying for the strength to grieve”); and “Build that Fire,” a warm and optimistic conclusion to a truly great recording.

Q: You’ve called this album your “best work to date.” What led you to this point?
A: It's safe to say that we're always working to up our game, both with the songwriting and musicianship. Not to take anything away from previous recordings, and some of our most requested songs are from earlier recordings. But we learn from each record, what we liked and didn't. With each experience in the recording studio, we get more and more confident. We knew what we wanted this album to sound like and we took our time. Of course, we had the right musicians to make that happen. Seriously, with Jason [Dennie], Ozzie [Andrews], and Mike [Shimmin] we have such a dream team. Jason and Ozzie have been working on several of the songs with us for a long while, but many we hadn’t been performing much if at all, and they ALWAYS deliver way beyond our wildest expectations. This album is what it is because of them. No question.

Q: You note that some of the songs are up to 10 years old -- What’s the oldest one here? And was there any particular reason for not recording it before now?
A: Yeah, I think "Myths and Miracles" and "Happy New Year" are both about that old. They were both being considered for our 2015 album, Searching for Neverland, but we weren't happy with the recordings. Sometimes a song needs to be put away for a while and revisited later. Just felt like they were waiting for the right time. And this was the album.

Q: You’ve said that the writing of the title track crystallized the entire album. How did that song come about, especially the idea for the metaphor of “falling” in different ways?
A: We had been performing this “new song” -- calling it “Scaffolding.” And I knew in my heart that something was missing, but the vibe was so fun and people were digging it. So when I brought it to the gang -- as you know, I'm a member of the Yellow Room Gang -- David Barrett astutely suggested that the song needed another line at the end of what seemed like the chorus, and he said when you come up with it “that’s your title.” Almost immediately, the line "and there's nobody looking when they fall" came to me. And I was like, “That’s not only the title of the song, it’s the title of the next album!” I don’t think I’d ever been more excited about an album title. I looked at all the songs waiting to be recorded; it just made sense. More than any previous record, there’s a strong running theme here.

Q: You deal with a lot of big themes in these songs. It seems like a number of them address the changes and challenges life brings. I found “Walking Through” especially affecting. How did you come to write about that notion of persevering?
A: Yeah, I suppose that’s the “maturing” songwriter in me. You should see how many songs I have about the end of life that aren’t on this record -- ha ha. But you know, the older you get, the more experiences you have and those experiences inform what you write about. “Walking Through” is one of our most personal songs. It’s actually one of our older ones as well. Kind of a long story which I won’t go into, but the gist of it is we were forced into an unplanned move from what we thought would be our forever home.

Unplanned moves are hard enough and this came with the end of a really close friendship so it was extra emotional -- anger and sadness beyond what was normal. Like a divorce really. Thank goodness it wasn’t between Rod and me but we both felt such a huge loss.

All we could afford at the time was a little co-op townhouse so our living space was cut by 60 percent, and we learned a big lesson about letting go of both physical and emotional baggage. Though we eventually landed in a better place, we try to never forget how quickly things can be taken away and always remember how grateful we are just to be with each other.

Q: What’s your approach to writing? Do you tend toward lyrics first or music first? Do you sit down with the specific purpose of writing, or is it typically a more organic/jamming-until-something-works approach?
A: In my early years it was almost always words first but these days it’s more simultaneous. I’m usually inspired by a rhythm of some sort. It may be my guitar that starts talking or a set of words that fit with that rhythm. “When They Fall,” for example, started with that groove and the first couple lines just felt like they dropped in my lap and I had no idea where it was going but I loved the imagery of it. That’s how it goes sometimes.

I’ve never been a deliberate writer -- something has to kick-start that process or inspire me and it’s usually listening to music or when I’m just fiddling around on my guitar. I may have a piece of music that grows out of that noodling and I go digging for fragments of lyrics that haven’t found a home yet and the two magically feel right then or evolves with a lot of work.

I used to be much more prolific and now it takes me a lot longer to be satisfied with a song. It’s gotta be -- to me -- as good or better than anything I’ve already done. Not saying that’s a good thing 'cause it also keeps me from finishing anything.

Q: “Patience” must have some special meaning for you to be included as the only cover song among 11 strong original compositions. How did you come across it and what does it mean to you?
A:  We first heard this song on an album by Redbird, which was Kris Delmhorst, Jeffrey Foucault, and Peter Mulvey performing covers. I was drawn to “Patience,” such a great melody, and it was so lyrically different and interesting to me. We’ve been playing a version that was really similar to theirs for a decade or more but one day, just for fun we picked up the tempo and gave it a little bluegrassy feel. Now it was OUR version so we felt it was OK to record it.

Q: Do you have any Ann Arbor dates planned to celebrate the new album?
A:  We’re actually playing several CD release concerts with the quartet in October and November all around the southern part of Michigan, but we don’t currently have anything planned in Ann Arbor proper. We’d love to bring the full band to The Ark sometime next spring, so we’ll see.

Bob Needham is a freelance writer and the former arts & entertainment editor of The Ann Arbor News and AnnArbor.com.

Annie and Rod Capps regularly play around the area. Check their website for the latest dates and for more information about the new album.