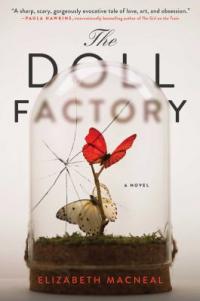 Against the backdrop of the construction of the Crystal Palace for The Great Exhibition; and the contentious selection process of the Royal Academy exhibitions, Macneal creates a thrilling psychological thriller about art and obsession that the New York Times Book Review called “(a) lush, evocative Gothic.”

Iris Whittle toils long hours at a factory painting faces on porcelain dolls but secretly harbors the ambition to be an artist. When she is approached by Louis Frost, a member of the Pre-Raphaelite Brotherhood to pose for his painting, she agrees, against the wishes of her family, especially her twin sister Rose, on the condition that Louis would teach her how to paint. As Iris grows into her artistic talent and mutual affection with Louis, she is unaware of the attention of Silas Reed, a curiosity collector and taxidermist, who schemes to make Iris his prized specimen.

The only person who is convinced that Iris is in danger is a young street urchin that Iris befriends,  but he might not be a match for the evil that lurks in the seamier side of Victorian London.

For further reading on this 19th century art movement, try The Art of the Pre-Raphaelites by Elizabeth Prettejohn and Pre-Raphaelite Women Artists. You might also enjoy the television series Desperate Romantics that dramatizes the Brotherhood’s quest for artistic immortality which takes them into some of the lewdest, darkest, and funniest corners of 1851 London.

For information on the Crystal Palace, a marvel of its time, try Crystal Palace : Joseph Paxton and Charles Fox;  and the catalogue of one of the first World's Fairs.