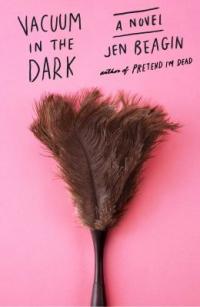 In Vacuum in the Dark * *  by Jen Beagin, Mona is twenty-six and cleans houses for a living in Taos, New Mexico. Though this is a standalone second novel, you might want to start with Pretend I’m Dead, in order to get the full backstory.  Named “A Best Book of the Year” by O, The Oprah Magazine, and shortlisted for Kirkus Review’s First Novel Prize, the 2017 Whiting Award winner Jen Beagin (a former cleaning lady herself) sets her debut in Lowell, MA where the 24 year-old Mona, alone and emotionally adrift, is trying to move forward in life.

While handing out clean needles to drug addicts, she met and fell for Mr. Disgusting, a charismatic artist turned drug addict who proceeded to break her heart in unimaginable ways. To start afresh, she moved to Taos. There, she shares an adobe house with a new-age couple “Yoko and Yoko”; and gets hopelessly tangled up with a client’s husband. As her business picks up, Mona finds it increasing hard to keep a professional distance from her clients (snooping in their belongings and taking photographs). Then there is the Hungarian artist couple with serious substance-abuse and boundary issues who asks Mona to pose for them;  and a single father who may be hiding a disturbing secret. 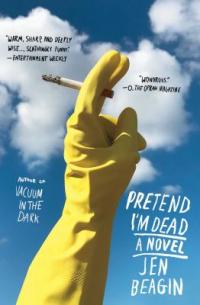 Through it all, Mona is saved from her self-destructive tendencies by the voice of NPR's Terry Gross, a wise, imaginary best friend as she searches for meaning and belonging.

“Beagin is a wonderfully funny writer who also happens to tackle serious subjects, which few authors are able to pull off successfully…(She) never treats these subjects lightly, but she doesn't shy away from employing very dark humor; the result is a comic novel that's a joy to read but never frivolous or superficial.” (NPR)

For fans of Sunshine Cleaning.  Readers might also enjoy A Manual for Cleaning Women: Selected Stories by Lucia Berlin. A 2015 finalist for the Kirkus Prize, these 43 stories “capture the lives of hard-living women from Denver to Peru to the Bay Area to the Texas borderlands.”