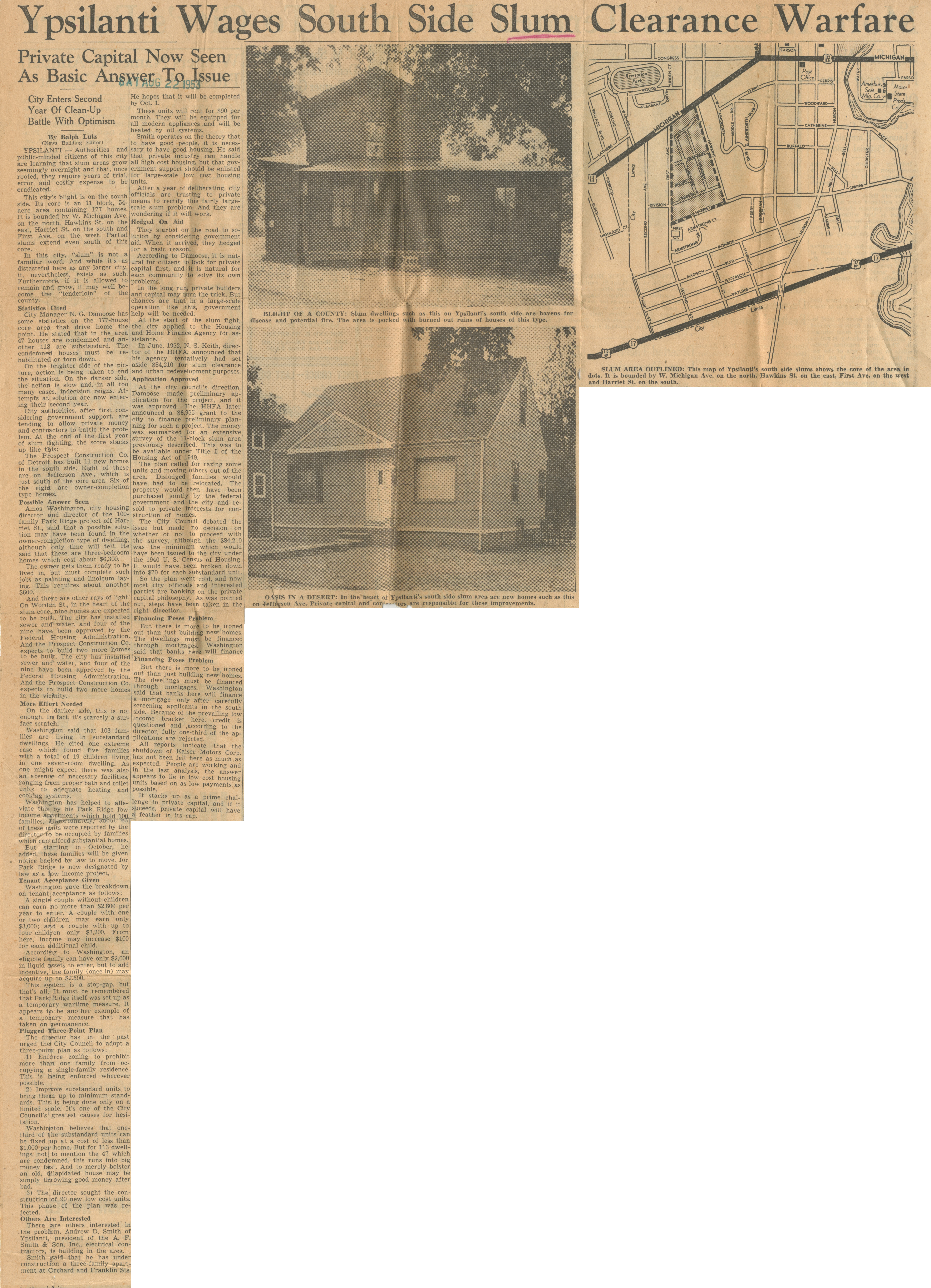 BLIGHT OF A COUNTY: Slum dwellings such as this on Ypsilanti's south side are havens for disease and potential fire. The area is pocked with burned out ruins of houses of this type.

OASIS IN A DESERT: In the heart of Ypsilanti's south side slum area are new homes such as this on Jefferson Ave. Private capital and contractors are responsible for these improvements.

SLUM AREA OUTLINED: This map of Ypsilanti's south side slums shows the core of the area in dots. It is bounded by W. Michigan Ave. on the north, Hawkins St. on the east, First Ave. on the west and Harriet St. on the south.

YPSILANTI — Authorities and public-minded citizens of this city are learning that slum areas grow seemingly overnight and that, once rooted, they require years of trial, error and costly expense to be eradicated.

This city’s blight is on the south side. Its core is an 11 block, 54-acre area containing 177 homes. It is bounded by W. Michigan Ave. on the north, Hawkins St. on the east, Harriet St. on the south and First Ave. on the west. Partial slums extend even south of this core.

In this city, "slum” is not a familiar word. And while it’s as distasteful here as any larger city, it, nevertheless, exists as such. Furthermore, if it is allowed to remain and grow, it may well become the "tenderloin” of the county.

City Manager N. G. Damoose has some statistics on the 177-house core area that drive home the point. He stated that in the area 47 houses are condemned and another 113 are substandard. The condemned houses must be rehabilitated or torn down.

On the brighter side of the picture, action is being taken to end the situation. On the darker side, the action is slow and, in all too many cases, indecision reigns. Attempts at solution are now entering their second year.

City authorities, after first considering government support, are tending to allow private money and contractors to battle the problem. At the end of the first year of slum fighting, the score stacks up like this:

The Prospect Construction Co. of Detroit has built 11 new homes in the south side. Eight of these are on Jefferson Ave., which is just south of the core area. Six of the eight are owner-completion type homes.

Amos Washington, city housing director and director of the 100-family Park Ridge project off Harriet St., said that a possible solution may have been found in the owner-completion type of dwelling, although only time will tell. He said that these are three-bedroom homes which cost about $6,300.
The owner gets them ready to lived in, but must complete such jobs as painting and linoleum laying. This requires about another $600.

And there are other rays of light.

On Worden St., in the heart of the slum core, nine homes are expected to be built. The city has installed sewer and water, and four of the nine have been approved by the Federal Housing Administration.And the Prospect Construction Co. expects to build two more homes in the vicinity.

On the darker side, this is not enough. In fact, it's scarcely a surface scratch.

Washington said that 103 families are living in substandard dwellings. He cited one extreme case whidh found five families with a totial of 19 children living in one seven-room dwelling. As one might expect there was also an absence of necessary facilities, ranging from proper bath and toilet units to adequate heating and cooking systems.

Washington has helped to alleviate this by his Park Ridge low income apartments which hold 100 families. Unfortunately, about 63 of these units were reported by the director to be occupied by families which can afford substantial homes. But starting in October, he added, these families will be given notice backed by law to move, for Park Ridge is now designated by law as a Iow income project.

Washington gave the breakdown on tenant acceptance as follows:

A single couple without children can earn no more than $2,800 per year to enter. A couple with one or two children may earn only $3,000; and a couple with up to four children only $3,200. From here, income may increase $100 for each additional child.

According to Washington, an eligible family can have only $2,000 in liquid assets to enter, but to add incentive, the family (once in) may acquire up to $2,500.

This system is a stop-gap, but that's all. It must be remembered that Park Ridge itself was set up as a temporary wartime measure. It appears to be another example of a temporary measure that has taken on permanence.

The director has in the past urged the City Council to adopt a three-point plan as follows:

1) Enforce zoning to prohibit more than one family from occupying a single-family residence. This is being enforced wherever possible.

2) Improve substandard units to bring them up to minimum standards. This is being done only on a limited scale. It's one of the City Council’s greatest causes for hesitation.

Washington believes that one-third of the substandard units can be fixed up at a cost less than $1,000 per home. But for 113 dwellings, not to mention the 47 which are condemned, this runs into big money fast. And to merely bolster an old, dilapidated house may be simply throwing good money after bad.

3) The director sought the construction of 90 new low cost units. This phase of the plan was rejected.

There are others interested in the problem. Andrew D. Smith of Ypsilanti, president of the A. F. Smith & Son, Inc., electrical contractors, is building in the area.

Smith said that he has under construction a three-family apartment at Orchard and Franklin Sts. He hopes that it will be completed by Oct. 1.

These units will rent for $90 per month. They will be equipped for all modern appliances and will be heated by oil systems.

Smith operates on the theory that to have good people, it is necessary to have good housing. He said that private industry can handle all high cost housing, but that government support should be enlisted for large-scale low cost housing units.

After a year of deliberating, city officials are trusting to private means to rectify this fairly large-scale slum problem. And they are wondering if it will work.

They started on the road to solution by considering government aid. When it arrived, they hedged for a basic reason.

In the long run, private builders and capital may turn the trick. But chances are that in a large-scale operation like this, government help will be needed.

At the start of the slum fight, the city applied to the Housing and Home Finance Agency for assistance.

In June, 1952, N. S. Keith, director of the HHFA, announced that his agency tentatively had set aside $84,210 for slum clearance and urban redevelopment purposes.

At the city council's direction, Damoose made preliminary application for the project, and it was approved. The HHFA later announced a $6,955 grant to the city to finance preliminary planning for such a project. The money was earmarked for an extensive survey of the 11-block slum area previously described. This was to be available under the Title I of the Housing Act of 1949.

The plan called for razing some units and moving others out of the area. Dislodged families would have had to be relocated. The property would then have been purchased jointly by the federal government and the city resold to private interests for construction of homes.

The City Council debated the issue but made no decision on whether or not to proceed with the survey, although the $84,210 was the minimum which would have been issued to the city under the 1940 U.S. Census of Housing. It would have been broken down into $70 for each substandard unit. So the plan went cold, and now most city officials and interested parties are banking on the private capital philosophy. As was pointed out, steps have been taken in the right direction.

But there is more to be ironed out than just building new homes. The dwellings must be financed through mortgages. Washington said that banks here will finance a mortgage only after carefully screening applicants in the south side. Because of the prevailing low income bracket here, credit is questioned and according to the  director, fully one-third of the applications are rejected.

All reports indicate that the shutdown of Kaiser Motors Corp. has not been felt here as much as expected. People are working and in the last analysis, the answer appears to lie in low cost housing units based on as low payments as possible.